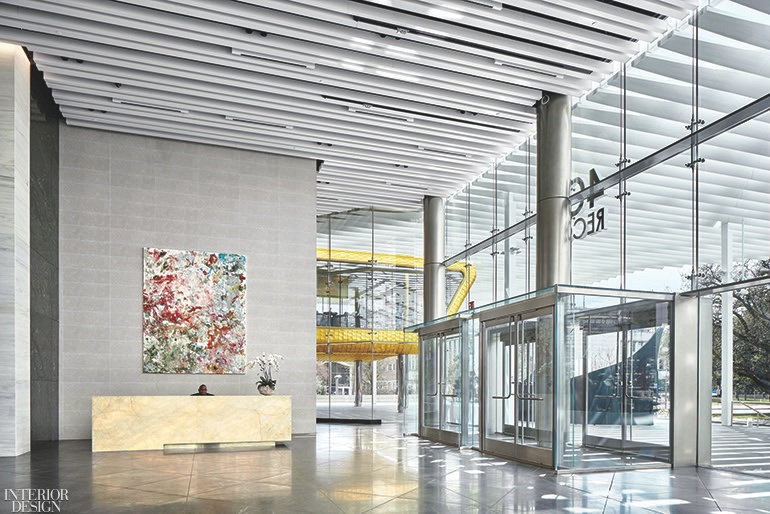 Dallas was a different city back in the day. The 1980’s, that is. Office towers walled off from the street were the norm, as were inglorious entrances from garages below. Plazas, should they exist, were rarely user-friendly. The Big D of the J.R. Ewing era was car-centric with virtually no pedestrian experience. Such was the prologue to Gensler’s renovation of 400 Record, a 17-story building from 1985 that originally housed the parent company of the Dallas Morning News but more recently sat vacant. Design directors Ian Zapata and Christopher Goggin—responsible, respectively, for architecture and interiors—helmed the project for the building’s new owner, also its anchor tenant, City Electric Supply Co.

Zapata describes the extant site, when he and Goggin toured the premises, as “a victim of design trends of the time.” But CES president and CEO Thomas Hartland-Mackie wasn’t daunted. Eschewing the temptation to go for a property with a better architectural pedigree, at a fancier uptown address, Hartland-Mackie opted to redevelop 400 Record as a marquee building. “It would be a family project, reflecting their values,” Goggin says—in other words, detailed to a degree that “we don’t usually get to do with our commercial clients.” The scope would embrace space planning, architecture, 62,000 square feet of interiors, and landscaping. Meanwhile, Martin Brudnizki Design Studio would handle interiors for the in-house restaurant, Bullion, serving 24-karat French cuisine.

Goggin responds to our query on process: “At Gensler, we take an inside-out approach, and we don’t segregate studios.” Zapata adds, “We hold the strong belief that division between architecture and interiors is artificial.” That being the case, the two concentrated efforts on the ground-level public areas, plaza included; a tenant amenity zone comprising a reconfigurable conference suite, a lounge, and a fitness center on three; and the duplex penthouse, linked by an impressive staircase, for family and executive offices.

Seeing no need to re-clad the building entirely, Zapata and Goggin did replace the solid walls at ground level with glass, transparency and visitor experience being the overarching aim. Gestures of welcome begin outside, in fact, at the plaza. Down came barriers between it and the sidewalk. In went planters. The biggest move toward pedestrian-friendliness is a canopy, its white framework and louvers suggesting shade and enclosure.

The canopy’s presence, however, doesn’t stop there. Those angled louvers seemingly pierce the curtain wall to run across the lobby’s double-height ceiling. As Zapata notes, “They start at the outside and move completely through the building to the other side.”

Minimal interventions made maximum effect. Now brilliantly sunlit, with an internally lit onyx reception desk glowing against a backdrop of pale gray porcelain tile, the lobby appears positively gallery-esque. Which was very much the intent, as Hartland-Mackie was keen on sharing his newly acquired cache of top-tier contemporary art with passersby.

As the initial draw, Aaron Curry’s outdoor sculpture, an angular black swoop, looms large on the plaza. Works inside the lobby beg closer examination, too. Sure, pedestrians can peer in from street-side. They are equally free to enter outright. Those who do may be drawn to a conglomeration of fragments embedded in the floor, resembling a current-day archaeological find. That’s a piece by Daniel Arsham.

But the lobby’s largest “sculpture” is actually architecture, Bullion restaurant’s floating enclosure. It’s an upside-down trapezoid with a gleaming golden fish-scale skin. Partially cantilevered over the plaza, the volume is supported by round columns clad in shiny stainless steel—a mixed-metal approach similar to that used in jewelry. A clear glass cylinder encases a ceremonial staircase up to the restaurant. Cascading through the center of the stair is another bona fide sculpture, Jean-Michel Othoniel’s giant crimson “necklace.”

Goggin offers some background on the office project’s hospitality component: “It’s an interesting story.” Gensler initially had everything planned out at ground level. Zapata joins the narrative: “Apologetic, they came back to us with another idea.” Why not lift the restaurant up for space underneath? Of course, it was a go. And there’s more to the story. While Hartland-Mackie embraces a contemporary look, his mother, CES co-owner Georgina Hartland, favors opulence. Through forms and finishes, Gensler hit both marks. But it was Martin Brudnizki, unabashed maximalist, who went all out for the opulent part. He made Bullion a gilded scene, fit for the J.R. Ewings of the present day.