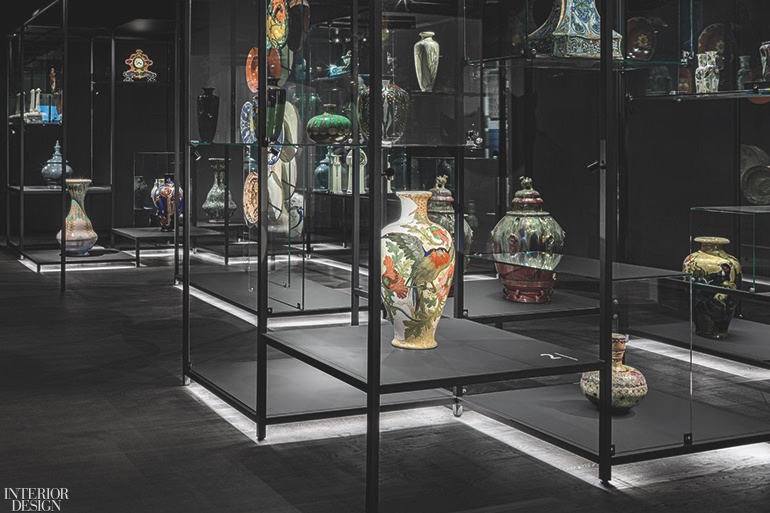 The Princessehof National Museum of Ceramics began in 1917 as the passion project of Nanne Ottema, a Dutch notary obsessed with his country’s history. The Friesland region in which he lived has longstanding ties to ceramics production. But the collection he eventually amassed ended up including many examples of Asian and Islamic porcelain, too. A century after Ottema founded the institution in Leeuwarden, located approximately two hours north of Amsterdam, the collection remains something of a mishmash. How to unify a museum that permanently displays Chinese pottery from 2800 BC as well as the former studio of Dutch 20th-century ceramist Johannes Jacobus van der Vaart?

An even bigger problem was the museum’s complex of disparate buildings, a knot of historically significant former residences. One is the 1622 redbrick baroque palace that, in the 18th century, served as the royal residence for Maria Louise, Princess of Orange, from which the Princessehof derived its name. Part of the original palace but made into a separate residence after Maria Louise’s death is the 1898 birthplace and family home of master illustrator M.C. Escher. A 1970’s renovation and addition on the other side of the palace managed to increase the museum’s footprint but not its sense of place; there was no real arrival experience. Inadvertently conjuring up an Escher-esque scenario, interior architect Jeroen Dellensen says, “It felt like you had to climb all kinds of ladders and stairs.” He is co-founder with Jaspar Jansen of I29 Interior Architects, which masterminded a solution for the museum, just in time for its 100th anniversary.

The facades are heritage listed, thus untouchable, so I29’s redesign began with a surgical demolition of the three-story, 13,000-square-foot interiors. “They had become cluttered across the years,” Dellensen recalls of the chopped-up rooms. In the ’70’s areas, the designers took the greatest liberties, but even some historical areas were pared back, emerging clean and contemporary. Elsewhere, a new entrance was opened from the garden, the central front door moved to the side, and major rooms switched functions. The palace’s former entrance hall, a grand, ceremonial space with a restored baroque beamed ceiling and silk wall covering, now contains the visitor information center and space for tour groups to assemble. “You really feel that this is a museum,” Dellensen says.

Having reopened and restored rooms, the designers created freestanding interventions and installations clearly delineated and visually distinct from walls. “You can walk around the whole perimeter on the inside,” Jansen says. Visits start in a gallery that displays mass-produced ceramics from around the world, packed chockablock in I29–designed white display cases inspired by shipping crates. The boxes, glass-fronted and lit from within, are stacked high, containing objects old and new, expensive and not—the intention being to illustrate the ubiquity, utility, and surprising durability of ceramics. “We dig deep for that one best solution and hold on to the vision,” Jansen continues.

Some gallery spaces are differentiated by color. In the ancient Chinese gallery, for instance, walls are painted the vibrant red of the porcelain in the collection. The mood flips in the art nouveau gallery, its walls swathed in inky graphite. When curators flagged safety and mobility concerns because of the darkness, the designers responded by installing LEDs at the base of displays, not only averting accidents but also creating the illusion that the ceramics are floating.

Color also helps spaces on different levels of the buildings cohere. Consider the new tea salon, one of the expanded visitor amenities that is among the most contemporary and successful of the I29 interventions. Occupying what was once a ’70’s-era storage room off the garden, today the salon is an airy, chic eatery for the artistic community to gather.

Behind its bar, wall-mounted open shelving is made of ultra-thin steel powder-coated in blocks of blue, green, pink, and yellow pastels. Otherwise, a gray the designers liken to wet clay dominates the palette. A sort of datum line works like a baseboard for the floor at its highest point. Anything below that, where the floor steps down, is rendered in the claylike hue, including the polyurethane flooring, the bar’s laminate surfacing, and the upholstery on the chairs, stools, and banquette cushions.

The adjoining gift shop picks up the horizon line, after a gap, as if it were an extension of the bar. Here, artisanal and collectible ceramics by the likes of Piet Hein Eek and Scholten & Baijings are sold. Feedback from patrons suggests that this is the most well-loved part of the project. Jansen reports the shop is doing 10 times better than before it was redesigned. Expect that number to balloon even more when revenue is tallied at the end of the year, once Leeuwarden completes its turn as a 2018 Europe Capital of Culture.