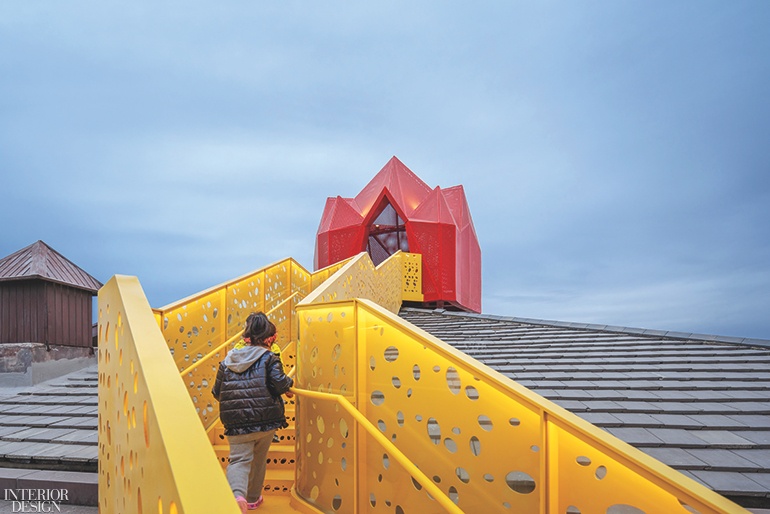 Children’s play spaces are often drenched in poppy colors and cartoonish graphics. Or they’re propped with miniature versions of fruit stands, cash-wrap desks, and other “grown-up” features. Consider the typical preschool or pediatrician’s office. But designer Erni Min and architect Yu Ting, co-founders of Wutopia Lab, have observed that many kids, including their own eight-year-old daughter, prefer environments that are more subtle, even a bit abstract—all the better to fuel creative play. “They’re sometimes more drawn to visual interest that arises from spatial change than bright color,” Erni begins, “a space that’s simple and neutral, with just hints of color.”

So when the two were hired to design a child-focused amenity space for Aranya, a family-friendly resort complex in coastal Qinhuangdao, three hours east of Beijing, they embraced a more elliptical approach. Although Wutopia Lab is no foe of bright, youthful hues, having used them to transformative effect in projects like the Zhongshu bookstore in Shanghai and a public art installation at the Shenzhen Biennale, for the Aranya Kids’ Restaurant, they shifted into neutrals, with a few well-placed strokes of yellow and red. Trippy funhouse mirrors, gravity-defying vertical gardens, giant “soap bubbles,” and a balloon-strewn ceiling help spark the imagination. “We used exaggerated artistic techniques to turn daily life into a magic reality,” Yu says.

This adventure playland is sited inside a 10,800-square-foot wing of a facility previously used as a community dining hall. The building itself, though only four years old, was somewhat dated-looking, Yu explains, its striated stone facade a mash-up of “prairie villa and contemporary art-deco styles.” Wutopia Lab gave the blocky structure an enigmatic air by cocooning three elevations in backlit panels of translucent polycarbonate (thus Min and Yu’s pet name for the project: Polycarbonate Neverland). The structure now emanates a soft glow, like a rectilinear cloud.

Given the fanciful design, it’s no surprise to learn that the client gave Wutopia Lab carte blanche, its concept limited only by the relatively modest budget of approximately $450,000. The brief was to convert the wing into a facility that would accommodate both playing and dining, functions that Min and Yu relegated to separate floors. And then they added a third: Adorning the peak of the shingled roof is a bright-red play pavilion, a sort of cherry atop the sundae—an apt metaphor given the project’s ice-cream buffet. “Our initial thought was to make a flame that people could see all the way from the beach,” Erni recalls. Dubbed the flying house, the pavilion is accessed by a beckoning sunny staircase, a sort of yellow-brick road that weaves in and out of the building, fostering a sense of discovery.

Upon arrival, visitors can head straight to the ground-level activity zone or take the yellow stair one flight up to the restaurant. Whereas the latter is all light and airy, the lower level is darker and mysterious. Space-distorting mirror walls reflect a black-painted ceiling, dotted with twinkly fiber-optic lights, like a starry sky on a moonless night. Circles are a theme here: Floating in a pool of marine-plastic balls are globe lights and see-through PVC bubbles, the latter large enough to be commandeered as private clubhouses. “Kids love soap bubbles, so fleeting and unpredictable,” Yu notes. In the center of the floor plate is a theater, another circular shape, furnished with knitted black ottomans shaped like sea urchins. Further fun comes in the form of a stainless-steel slide, a trampoline, and, for less boisterous moments, a tucked-away picture-book library. Even a restroom, awash in blue, is like being inside an aquarium.

After working off their energy, kids can recharge at the restaurant upstairs. Milk-white shell chairs and tabletops populate the dining area proper, also in-the-round, a screen of white PVC pipes, spaced about an inch apart, encircling its perimeter. Along the room’s periphery, a servery offers substantive nourishment to supplement the aforementioned ice-cream buffet in the center. An overhead element creates the feeling of being inside one of its cones: A backlit stretched membrane is sprinkled with white helium balloons, enhancing the dreamy, bright but warm vibe. “We ‘digested’ the physical properties of materials to create a place that loses materiality and spatial orientation,” Yu explains.

A door from the dining area leads to the light forest, a polycarbonate-walled courtyard that’s half shaded by a mirrored ceiling and half exposed to the elements. “Forest” may be a bit of a stretch, as there’s only one tree, its skeletal branches adorned with illuminated orbs. From there, it’s one more flight up to the 200-square-foot rooftop aerie. The zigzagging form was sculpted of a double layer of perforated aluminum, the apertures offset to create a moiré effect. Here as elsewhere, the choice and treatment of materials creates perceptual ambiguity, delightfully confusing space and scale, blurring boundaries between walls and ceiling, indoors and out, reality and imagination.