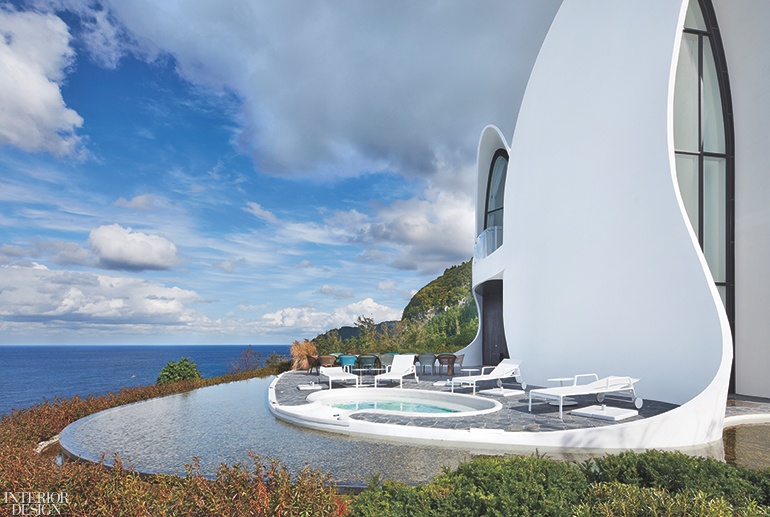 Commissioned to create a high-end resort on the unspoiled volcanic island of Ulleungdo, a three-hour ferry ride from the South Korean mainland, architect Chanjoong Kim imagined “an observatory where people come to appreciate the spirit of the sky and the earth” and harness its potent and rejuvenating chi, or energy. The resort, appropriately named Healing Stay Kosmos, is sited dramatically at the top of a cliff that plunges 100 feet into the East Sea. Behind it looms a vertiginous rocky outcrop, Songgotbong, or Ice Pick Peak, for its resemblance to the climbing implement. “From its shape, it’s clear what strong energy this mountain holds,” explains Kim, founder and principal of the System Lab. “In fact, it was said that during the period of Japanese colonial rule, the government planted three heavy iron stakes on Songgotbong to reduce its power and prevent the birth of Korean heroes.”

With few manmade structures in the immediate vicinity, Kim’s plan was to let the setting do the talking and not erect anything that would obstruct its natural beauty. Although the resort’s two buildings—brilliant white, undulating forms of ultra-thin concrete that flow seamlessly into one another—are hardly understated, they look at home in the rugged, almost lunar landscape, thanks to their organic curves and slightly otherworldly character. The billowing shapes act like a canvas on which a light show, created by the sun and moon, clouds and waves, plays continuously.

The main building, Villa Kosmos, which is rented as a whole, housing four suites, communal living and dining areas, a whirlpool, and a terrace, sits furthest out on the promontory. The two-story structure comprises a circular courtyard surrounded by six vaulted wings arranged in a nautilus shell-like spiral; their arched end walls, glazed from floor to ceiling, provide panoramic views of the sea, mountains, and nearby caldera basin. The second building, Villa Terre, faces Songgotbong and has eight guest rooms available individually and a restaurant. It maintains the resort’s fluid, thin-walled vocabulary but lines up its five, barrel-vaulted sections in a staggered row like a space-age motel or, as Kim puts it, “a scarf laid on the edge of the cliff.” Both buildings total 18,000 square feet.

Villa Kosmos’s interiors are as striking, minimal, and esoteric as its exterior. The walls and ceilings are all-white and art-free. “I think this neutrality allows people to focus more on the forms and properties of the spaces,” says Kim, who was also responsible for the interiors and believes a little ambiguity is essential to pique curiosity. “When things are too clear, people tend to react less, even feel indifferent.”

The name and character of each Villa Kosmos suite reflects the Taoist tradition of associating the planets with specific elements—in this case, Mars with fire, Mercury with water, Jupiter with wood, and Venus with metal. “We aimed to capture the spirit of those four elements,” Kim says of the guest rooms, which all feature 20-foot-high arched ceilings. Names were assigned—and appropriate materials and furnishings specified—based on a room’s orientation. Thus, the suite with the best view of the fiery sunrise is called Mars; its palette favors warm kiln-produced colors and textures: A ceramic chair by art potter Hun Chung Lee sits on the multihued terracotta-tile floor near a rich-brown leather-upholstered wardrobe and matching luggage rack, both of which are replicated in different colors for the other rooms.

Mercury, the suite with the best sea view, boasts such water-evocative pieces as Cini Boeri’s curved-glass Ghost chair set off by limpid inky-blue marble flooring. Jupiter, which overlooks the tree-clad landscape, privileges wood in the form of oak floor planks and a Grete Jalk plywood lounge chair, while Venus, with a view of ore-bearing rocks, reflects its metallic theme in a bold Emilio Nanni stainless-steel chair and the titanium-colored expanse of its polished-granite floor.

The villa’s common areas are just as pared down in a similar bid to invite the outdoors in. The living area’s subdued palette—brown, black, and gray tables, armchairs, and sofas on white resin flooring—allows views of Elephant Rock, a unique outcrop that resembles some ancient pachyderm rising from the sea, to take center stage.

The enigmatic and ever-present profile of Songgotbong is referenced in the dining area’s vaulted ceiling, while the powerfully figured grain of the 10-person oak table celebrates the rawness of the natural world outside. Here, and in the living and bar areas, patches of glossy granite “crazy paving,” a seemingly haphazard pattern of slabs, are laid over the white resin floor to evoke the lava flows once spewed by the island’s now extinct volcano. “We emphasized the relationship of the building with the site at every turn,” Kim says, succinctly summing up Healing Stay Kosmos’s design philosophy.