Squire and Partners Propels a Historic London Complex Into Today 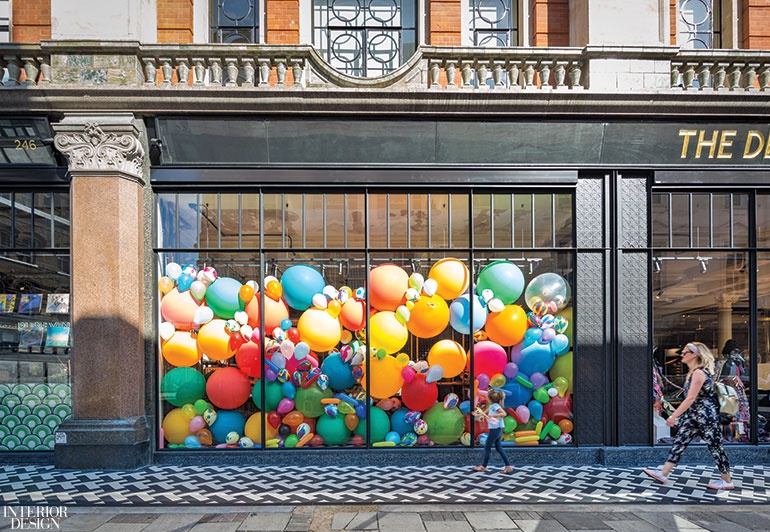 If there was ever a project that shows how to pay tribute to a heritage building’s past while propelling it into the present day, then the London office of Squire and Partners is a strong contender. The architecture firm repurposed a derelict annex of an 1870’s former Bon Marché department store—and an adjoining Victorian Gothic former firehouse—into a mixed-use entity now collectively and aptly known as the Department Store. It contains Squire’s new office, which had been located in a too-small modernist building with skyrocketing rents, along with public retail and dining spaces and a post office. The approach was respectful, focusing on craftsmanship, but also bold. Squire built an addition to the roof, punched through walls and floors, left brickwork around doors raw and jagged, and exposed exquisite tile- and metalwork on the main staircase as well as the layers of paint, history, and graffiti that had accumulated over the decades in the city’s rapidly gentrifying Brixton neighborhood.

“Knowing how much to intervene was the biggest challenge for us,” head of interior design Maria Cheung says. “In the end, we agreed to a very simple set of rules: If it’s existing, leave or reveal it, keep the mechanicals exposed so the original ceilings can be seen, and paint any new walls with just a base coat.” Several times contractors asked the team, Don’t you want us to skim that wall and paint it? The answer was always a firm no. Slowly, original brick- and woodwork, tile, marble, and terra-cotta elements were brought back to life. Throughout, the existing floor planks—teak, mahogany, and oak—were exposed, restored, and sealed.

The 65,000-square-foot, five-story annex dates to 1906, when it was constructed in the Edwardian style to house Bon Marché’s furnishings department. Inspired by the origins, the Squire team designed or sourced pieces with a department-store aesthetic or functionality everywhere possible. Display cabinets, credenzas, ornate railings, and even the modular plywood workstations with ample open storage have a sort of refined retail aura.

The greatest homage is paid on the ground level, with its steel-framed windows and patterned parquet flooring. There, the enormous reception desk was conceived as a haberdashery display. Instead of its 21-foot-long glass top showcasing handkerchiefs and ties, it’s populated with tidy rows of maquettes of and awards from Squire projects. Local metal artisans Ian and Richard Abell of Based Upon fronted the desk with textured panels in their signature tramozite, a metal-resin composite.

Elsewhere in the complex, Squire called upon additional local and international craftsmen for era-appropriate details, such as brass door handles, glass pendant fixtures, and sculptural installations. “We really sought to convey to people how interested we are in the making process—and how to make things well,” partner Tim Gledstone adds.

Arguably the most compelling and original of these designer-maker collaborations was with London fashion house Eley Kishimoto. Mark Eley and Wakako Kishimoto created several patterns derived from what Cheung says are “the beautiful details and motifs” they found in windows, tile, skylights, and metalwork. The patterns were then applied to large handmade rugs in the common areas, parquet flooring in the elevators, and, most originally, the brass-trimmed plywood inserts used to mark any new thresholds created by the architects. Elsewhere, artistic handiwork was by Squire’s own brood. Using black and gray electrical tape, members of the illustration department emblazoned one of its walls with a latticelike pattern derived from the framework of the rooftop’s new dome.

Inside the penthouse, it’s funky and comfy: A vibrant green rug patterned with an Eley Kishimoto oversize floral anchors a charcoal-gray sectional by Rodolfo Dordoni, and copper paneling adds shimmer and shine. At night, the space is Upstairs, a members-only bar and restaurant. By day, it’s the Squire staff canteen, the myriad glass doors opening to a landscaped terrace—outfitted with a very modern-day ping-pong table.