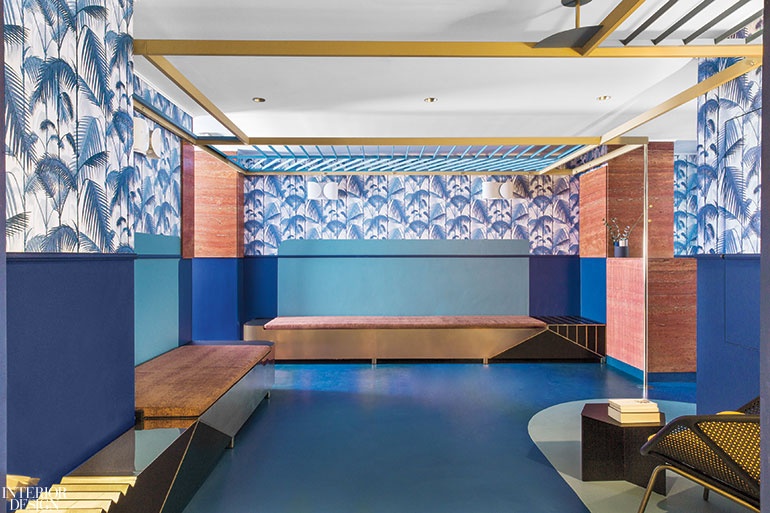 A native of Greece, Eirini Giannakopoulou did not plan to end up in Italy. But, after earning a master’s degree in architecture at the National Technical University of Athens in her hometown, her passions for scenography and jewelry brought her to the Istituto Europeo di Design in Turin. There, she met Stefano Carera, who studied architecture at the Politecnico di Torino. In 2011, they launched SCEG Architects, building a portfolio of residential and commercial projects that combines their different cultures and shared expertise.

One such project is the boutique Hotel les Cigales in Nice, France. The pair’s conceptual starting point draws from Giannakopoulou’s origins: xeno-dochio, Greek for a box that contains travelers, otherwise known as a hotel. The architects’ interpretation centers on a narrative of geometric shapes appearing throughout the 6,000-square-foot, four-story property. Boxy daybeds, round mirrors, and triangulated brass wardrobes furnish the 19 guest rooms, each one unique but all with Achille Castiglioni and Joe Colombo light fixtures. Even the throw pillows boast a grid of rectangles. Carera describes it as “an abstract painting of Nice.”

“It’s a reflection of the surroundings,” Giannakopoulou says of the hotel’s French Riviera location. Indeed, in the lobby, the blues of the retro-style palm-tree wallpaper coordinate with the azure resin floor, while the travertine paneling and Patricia Urquiola upholstery infuse a beachy coral.

Elsewhere, the palette seems Memphis-inspired. One guest room pairs plum, teal, and cobalt blue. Another has a raspberry-painted bathroom. Fitting that its sconce is by Michele De Lucchi.