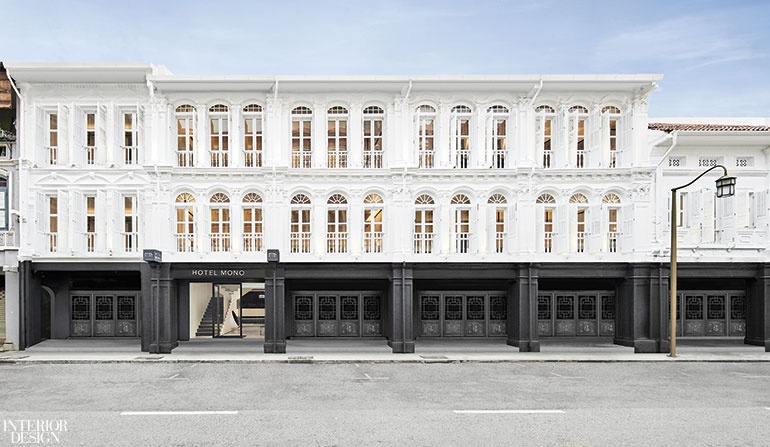 Six years ago, William Chan won the President’s Design Award, Singapore’s top interior design accolade. It was for an apartment featuring a glossy black volume in the center of the floor plate containing a kitchen, bathrooms, and. . . a bomb shelter. It was on the strength of this explosive project that first-time hotel investor Eighteen M approached Chan’s studio, Spacedge Designs, with the task of turning the decrepit Dragon Court Hotel in the city’s Chinatown neighborhood into stylish accommodations for urban-minded millennial travelers.

The client initially resisted the designer’s monochrome concept. “It was too radically different from conventional hotels,” Chan says. But he persisted. “I’m a firm believer in not conforming,” he states. It paid off: Eighteen M executives were so enamored of the final outcome, they named the property Hotel Mono in honor of Chan’s pared-back palette.

The 15,000-square-foot hotel occupies six adjoining buildings, five that are three levels and one that is two, Chan painting their facades black and white. Inside, referencing gray-scale photography and the austere lives of the country’s first Chinese immigrants, he continued the color scheme, staining the wooden floorboards in the 46 existing guest rooms and suites black. Powder-coated steel dominates the accommodations, its most ingenious use in the rodlike light fixtures that double as clothing racks; they stretch across the stark white ceilings like lines drawn in space. Linearity, in fact, is another theme carried throughout, save for the circle cut out of a lobby wall to accommodate a built-in vintage Eero Aarnio chair in black, of course. It’s no surprise to learn that Chan once studied graphic design.