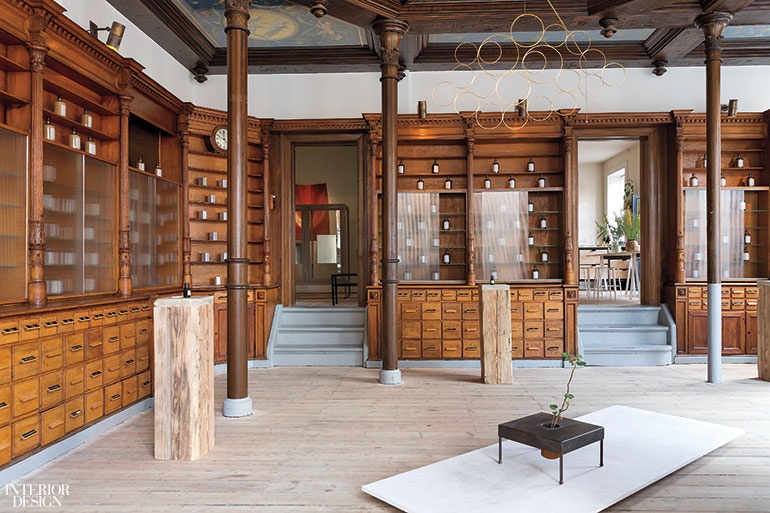 “All of what we do is as simple as it can be,” Niels Strøyer Christophersen states. As Frama Studio’s creative director and founder, he carries that viewpoint through from the firm’s product designs to its interiors. But his version of simple embodies a Scandinavian-meets-organic sensibility. That’s evident at his Copenhagen headquarters, which incorporates the flagship of its retail arm, Frama Studio Store. (Smaller shops are in Oslo and Stockholm.)

Relocating from a nearby workshop, Frama now occupies the former St. Pauls Apothecary, a historic structure dating to 1878. Christophersen and his team maintained much of its original architectural elements, creating a synergy between past and present. The studio is upstairs, while the shop, selling lighting and furniture by in-house and independent designers along with Frama’s skincare line, aptly called the St. Pauls Collection, occupies the 1,900-square-foot ground level.

“It mirrors our furniture designs and general creative approach,” the designer says of the space, “straightforward, honest, uncomplicated. For the store, we aimed for what we call a ‘sculpture atelier.’” It helps that some stellar elements were already in place. One is visible right upon entry: the original mural of Latin gods radiating across the ceiling. Beneath it still stand the apothecary’s built-in shelving units, which encircle the shop’s main room and are lined, sparingly, with bottles of soaps and lotions. Christopherson fronted select shelves with sliding glass panels “as a quiet sort of contrast,” he says.

Smaller rooms adjoining this front room are spartanly outfitted with pieces for sale—a single chair in a corner, a slim brass pendant fixture over a marble-topped pedestal table. Christopherson applied a pale beige chalk paint to the plaster walls for texture, and sanded the existing pine floor planks, which are pleasingly worn. “We mixed the old and the new and got something unique,” he says. And something patriotic, too: The ceiling mural is in Danish royal blue.