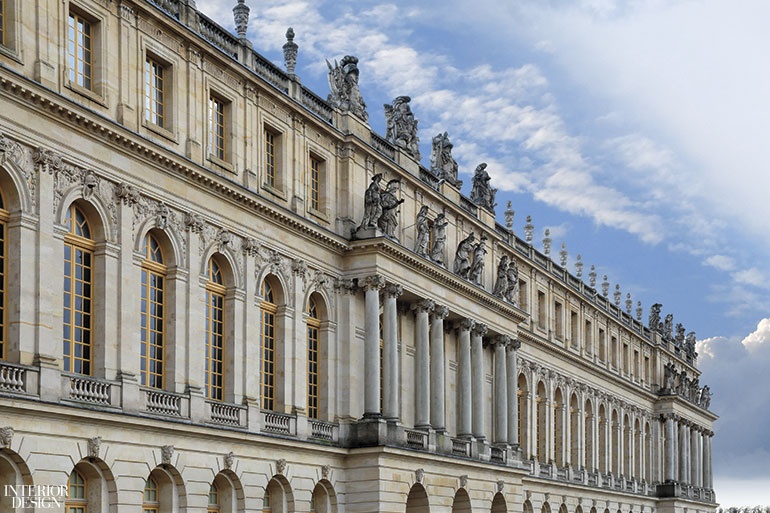 He is restaurant royalty. In his 30-year career, chef Alain Ducasse has amassed 18 Michelin stars and a worldwide restaurant empire. One of his latest is fittingly inside the Château de Versailles, the former principal residence of the kings of France during the 17th and 18th centuries, now a UNESCO World Heritage Site. Called Ore, it was a form of architectural royalty that brought the new restaurant to fruition: Dominique Perrault, whose Bibliothèque Nationale de France in Paris earned him not only the Mies van der Rohe Award in 1996 but also the Grande Médaille d’Or de l’Académie d’Architecture more recently. Although the work of Dominique Perrault Architecte is undoubtedly contemporary, the firm is often retained for heritage rehabilitation projects, such as the current conversion of the 1880’s La Poste du Louvre. But Versailles, which was done in tandem with Frédéric Didier, a chief architect for French historical monuments, over the course of five years, may be its most high-profile restoration commission.

Perrault won the 2011 competition in part because his firm’s bid was the only one to forego exterior changes. Competition guidelines called for a new public entrance that was to include such amenities as a coatroom and bookstore, plus a gourmet restaurant and an auditorium. All were to be located in two buildings that adjoin each other and the main palace: the Dufour Pavilion, which dates to 1821, and the Old Wing, from the 1670’s. Unusually, notes Perrault, the terms indicated that proposals involving moving or changing exterior walls to gain space would not be eliminated. The architect vehemently disagreed with those terms. “Not a Versailles facade!” he recalls exclaiming. “We said to ourselves that if we could come up with an idea that would conserve the architecture, we would enter the competition. Otherwise, we would not. It was an aesthetic, and a philosophical, decision.” Leaving historic walls untouched, DPA’s winning solution suggested digging out underground to enlarge existing cellars, “gaining space in depth instead of in width,” Perrault explains. “We offered a double-decker.”

The basic structure of the renovation was already in place when Ducasse came on board to the 8,900-square-foot restaurant piece of the project. Once he did, he was instantly involved in revising the layout: back-of-the-house plans were enlarged, adding state-of-the art kitchens upstairs and prep kitchens and a wine cellar underground. “Ducasse was ingenious,” Perrault notes. “He was the one who insisted the restaurant be able to serve breakfast.” (Ore is open to the public for breakfast, lunch, and tea; at night, it becomes Ducasse au Château de Versailles, serving dinner only by special request.)

Entry is through the Dufour Pavilion, and new stairs lead up to the second floor. It houses the restaurant’s foyer and two tearooms, the bar area sits at the junction of the two buildings, and the Old Wing contains the three main dining rooms. In the latter, Perrault retained their enfilade layout; in fact, he did nothing structural to them at all, preserving their original fireplaces and Versailles oak parquet flooring, simply polishing it with a discreet taupe tint. But, since the floors levels were not the same in the two buildings, DPA raised the Dufour foyer and tearooms on a platform, surrounding it by a classical wrought-iron balcony. Additionally, the platform allows for tech equipment to be concealed underneath. “Everything had to be designed down to the tiniest centimeter,” Perrault says, “because nothing there is really even or straight or exactly square or octagonal.”

As for the restaurant’s name, it refers to oris, Latin for mouth, and specifically to the long-ago royal cooks and kitchens that fed Versailles, collectively known as the Service de la Bouche du Roi, or Service for the King’s Mouth. But the wordplay with gold ore works equally well in the gilded realm of Versailles, where even the rooftop is plated with gold leaf. As such, materials like brass and aluminum, often with golden finishes, appear throughout the establishment. That’s the work of Gaëlle Lauriot-Prévost, DPA’s art director and Ore’s interior design lead. Metal is her specialty, including metal mesh and metallic cloth, both used here. Each finish, she says, “catches the light, and conducts it in a different way, giving a vibrant texture.”

Speaking of light, Lauriot-Prévost went back centuries for inspiration for the restaurant’s ceiling fixtures. Brushed brass discs that radiate with LED rods, they derive, she notes, from fraises, the starched circular collars worn in 16th-century Europe. For seating, she looked to today: Slim armchairs upholstered in champagne, burgundy, or dove-gray leather are by fellow Frenchman and Interior Design Hall of Fame member Patrick Jouin.