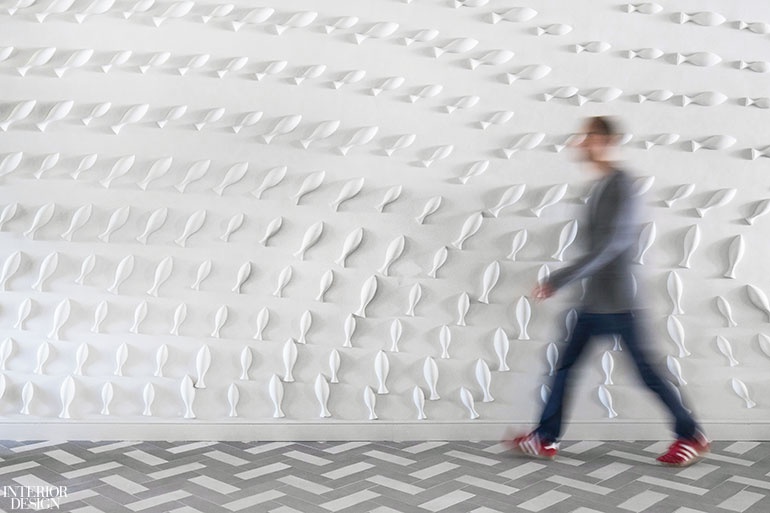 Fabrica is a creative boot camp near Venice funded by Benetton. It’s there that Gerard Sanmarti and Gabriele Schiavon met, studying under the expert eye of photographer Oliviero Toscani, who shot the brand’s advertising campaigns. Like many Fabricantes, Sanmarti and Schiavon went on to form their own business, theirs being Lagranja Design, a multidisciplinary studio focusing on interiors, furniture, and installations. Its name, Spanish for the farm, was copied from the street where their first studio was located. With Sanmarti being Spanish and Schiavon Italian, coupled with their unorthodox training, their initial projects brimmed with color and southern European irreverence. At Singapore restaurant Pim Pam by Foc, for instance, Catalan folkloric characters painted on walls have an anime aesthetic. “More than a style,” Schiavon says, “Lagranja is an attitude.”

Regional craftsmanship, however, was the thrust of a recent project, ME Sitges Terramar Hotel outside of Barcelona, Spain, which originally opened as the Hotel Terramar in the 1930’s but is now operated by ME by Meliá. Lagranja’s challenge was to bring grandeur back to the rundown seaside relic, its 10 floors housing 213 guest rooms and suites. At the firm’s nearby studio, a 19th-century former biscuit factory, model-makers, artists, and local artisans developed the decorative elements that would accompany the project’s myriad furniture pieces, both custom and production. “We’re very unconventional, which means we look at projects from different viewpoints and perspectives,” Sanmarti explains.

Since Sitges is referred to as the Saint-Tropez of Spain, the hotel’s overall mood is breezy and beachy, with touches of cheek. In the lobby, for example, a school of 163 fish handmade in white gypsum swims across a wall in the lobby, where a structural column is clad in wicker, a nod to traditional basket-weaving. Similarly, in the restaurant, floor-to-ceiling partitions are cotton and hemp macrame, resembling fishnets.