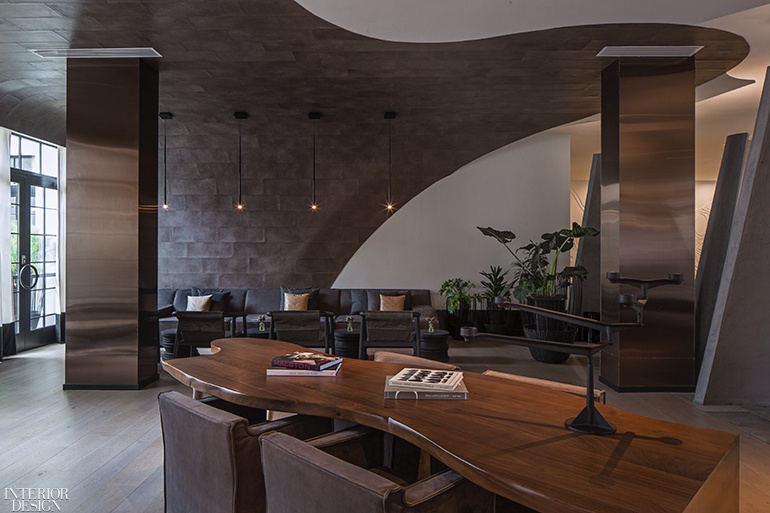 A curriculum vitae highlighting studies in mathematics and biology might not suggest a glamorous interior, furniture, and fashion designer. Yet Gulla Jónsdóttir, a Reykjavik, Iceland, native, has creativity and wanderlust embedded in her DNA, thanks to an artist grandfather and youthful summers spent in Italy. In her adopted city of Los Angeles, where she came to study architecture at SCI-Arc, Jónsdóttir established her firm on her birthday in 2009. Currently 10 strong, including a satellite office in Paris, Gulla Jónsdóttir Architecture + Design runs the gamut: conceiving far-reaching hotels, restaurants, and residences; clothing and jewelry; and furnishings. Among her myriad hospitality projects is the Macau Roosevelt, Jónsdóttir’s first ground-up hotel and the winner of a 2017 Interior Design Best of Year Award.

Just opened is the jewel in her crown: Kimpton La Peer Hotel, a 65,000-square-foot property in L.A. “It’s the first ground-up hotel in West Hollywood’s design district,” Jónsdóttir says. She was creative director for and designer of the four-story project’s 105 guest rooms and suites, alfresco lounges, and vast living-roomlike lobby.

The latter is artfully broken up into comfy conversation zones by immense concrete cones, doppelgängers for Richard Serra sculptures, and a communal table backdropped by a shaped leather-clad wall. Actual works by an international roster of artists appear throughout, a graphic black-and-white mural stretching from the elevator lobby’s walls and ceiling to the cabs being particularly noteworthy. The project came together so well, Jónsdóttir has moved her studio into a bright, raw space on the hotel’s ground floor.