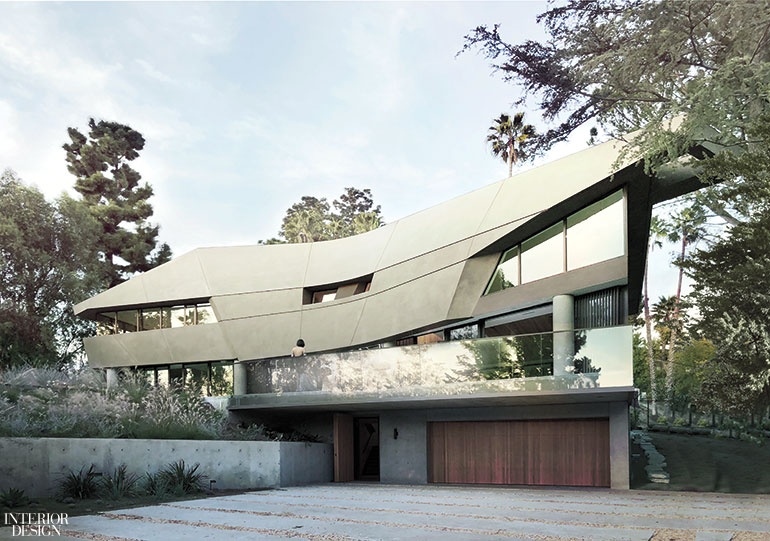 Patrick Tighe Architecture designed the marvel of a house, a 5,200-square-foot three-bedroom, with indoor/outdoor living, not high-style posing, in mind. Patrick Tighe, a longtime friend of Vassilakis’s, nicknamed his sylphlike creation
“the slither.” Distinguished by a subtly faceted form that appears weathered into windblown curves, the structure is the polar opposite of the orthog­onal mid-century glass boxes populating the neighborhood. To wit: The late Interior Design Hall of Fame member Julius Shulman, who photographed Koenig’s and Lautner’s projects, lived in a 1950’s Rafael Soriano–designed home up the street. “I was looking to do something different,” Tighe declares. Did he ever. In fact, his facade’s bends and bows are so complex, they necessitated rendering the scale model in steel plate.

A three-level wedge shape, the layered form was conceived to be compatible with the typography of the sloped site, a heavily wooded ½ acre up a winding road from the Hollywood Strip. (The single-story residence that originally occupied the site was determined not worth salvaging by the architect and his client, a musician.) The property boasts spectacular views of the surrounding canyons and hills, but nothing of the cityscape. Touring the grounds, you feel like you’re in another world entirely. Inside the house has the same effect.

Tighe situated the new building at the property’s highest point, supported by caissons descending 30 feet into the hillside. It treads lightly on the land. “We left the site as untouched as possible, to preserve the mature landscaping,” he says. It makes a minimal impact in other ways, too: The Mulholland Scenic Parkway Specific Plan stipulated that the house be inconspicuous from the road. Quite a switch, given that the architect is known for edifices with major street presence.

It is only from inside the property lines that the residence makes its statement. And it’s a definitive wow, coming into full view as guests pull around the driveway’s hairpin bend. The tripartite form is designed, Tighe says, like a series of geological strata, with layers alternating between solid and ethereal. The lowest level, partially embedded in the hillside, is board-formed concrete, punctuated by massive cedar-clad entry and garage portals. One flight up is the main living floor, where sliding glass walls provide unimpeded access to a terrace with an alfresco kitchen and an infinity-edge lap pool. Floor three, where the trio of sleeping suites are located, is wood-framed but dressed up in steel-troweled plaster to mimic concrete. While the glass-enclosed main level offers unobstructed wide-angle vistas, the upper floor is all about controlled, framed views through punched windows and down into the triple-height atrium, which is fitted with a constellation of two dozen minimalist pendant fixtures.

Perhaps the project’s most unique aspect is the 650-square-foot music studio, conceived by Tighe as a sort of bunker. A tentlike portal at the end of the terrace provides entry to the soundproof enclave. Inside it, square windows afford underwater views into the lap pool, the dappled light, Tighe notes, “giving the room an otherworldly quality.” It’s the ideal setting for composing provocative tunes—and images.