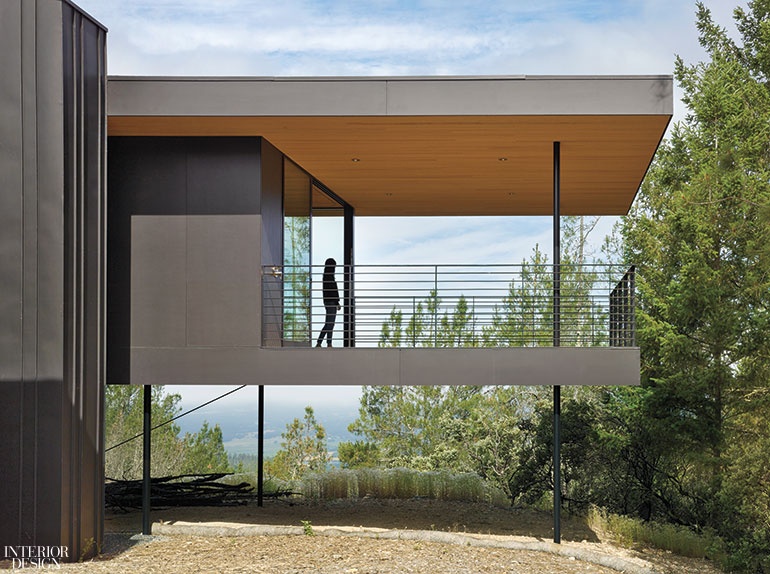 Two San Francisco denizens working in finance and tech came to Aidlin Darling Design with a straightforward proposition. Create a simple, efficient house, restrained in cost and scale, for their empty hillside site in Glen Ellen, about an hour north of the city. The couple’s only imperative? A single-story plan. Since Barry Mehew and David Rice were familiar with tending to aging relatives, they knew to avoid the hazards staircases present (their main residence, a four-story Victorian in the city, has plenty). Although they envisioned this new house as a weekend getaway for now, they anticipate eventually spending most of their time there, and downsizing to a pied-à-terre back in the city.

One might think the owners of a Victorian home might not gravitate to the contemporary ethos embraced by Aidlin Darling. But Mehew and Rice are global citizens with sophisticated taste: The former, a Brit raised in Australia, met the latter, a California native, while on vacation in Cape Town when both were living in London. That sensibility is on display at their city dwelling, where they’d left the front facade intact, but faced the rear facade in glass. To find an architect with a similar sensibility for the Glen Ellen house, Rice dove into design books, magazines, and Pinterest. That research yielded the minimalist, highly detailed work of ADD.

Off a winding dirt road, the 20-acre property is at the foothills of the Mayacamas Mountains, overlooking the Sonoma Valley. When principal Joshua Aidlin and project architect Cherie Lau came on board, infrastructure such as electricity and a water well was already in place. They came up with a scheme for the house that consists of three boxes totaling 3,100 square feet. Two of them are clad in standing-seam black zinc. “They rise out of the earth,” Aidlin explains. The third box is a glass pavilion that appears to float. “It performs as a bridge connecting the two solid volumes,” he adds. The kitchen and the two guest bedrooms, each with bathroom, are situated in the zinc structures, which flank the central glass volume. That is where the living/dining area and the master suite are contained.

Entry is along a walkway of Western red cedar, one of the project’s dominant materials. Dramatic as it is on its own, the glass box is made even more so by that entry sequence, which has visitors pass through a corridor bordered on one side by black aluminum fins and dark-stained cedar siding on the other. The result imparts a feeling of compression, amplifying the wow factor as one reaches the living/dining area, where the space and the views open way up.

There’s “a treehouselike feel,” Lau notes of the airy, open-plan room. That’s due in part to all the transparency making nature omnipresent. Further, retractable doors open an entire wall to a deck. Seemingly cantilevered over the wooded terrain, it’s like an alfresco room. But the material palette lends a hand to the easy, harmonious feeling, too. Western red cedar returns as ceiling slats indoors and out, and distressed oak planks form the floor. Those woods continue through to the master suite, which also features a deck.

But certainly no treehouse we’ve ever seen is furnished quite like this—sparingly yet exquisitely. Such comfy pieces as the living area’s enveloping brown-leather swivel chairs by Gerard van den Berg and Patricia Urquiola’s Tufty-Time sectional sofa mix with the dining area’s more clean-lined Belgian table and Jason Miller pendant fixture. In the master bedroom, pendants hand-crocheted of cotton hang on either side of the pleasingly austere bed by Matthew Hilton. In its bathroom, Aidlin and Lau sparked the neutral palette with swaths of chartreuse paint on the custom vanity.

Meanwhile, the rooms inside the zinc volumes are no slouches either. Although the kitchen reinforces its connection to terra firma with budget-friendly concrete flooring, no expense was spared when it came to its subtly detailed, cerused-oak cabinetry spanning a whole wall. Blackened-steel stools the owners found on Etsy pull up to an island with veined solid-surfacing that mimics Carrara marble. Since the kitchen only has glazing along one elevation, Aidlin and Lau cleverly mirrored its back wall to reflect sky and greenery, bringing in nature.

Indeed, the house extends beyond its borders. Mehew, Rice, and their guests can literally go beyond its borders on the terrace, which, thanks to ADD, now has a 45-foot-long swimming pool and a hot tub. The whole arrangement currently works well as a social setting, best enjoyed with eight to 10 friends, the owners say. As evenings set in, wines from local vineyards are decanted and a collective serenity fills the air.