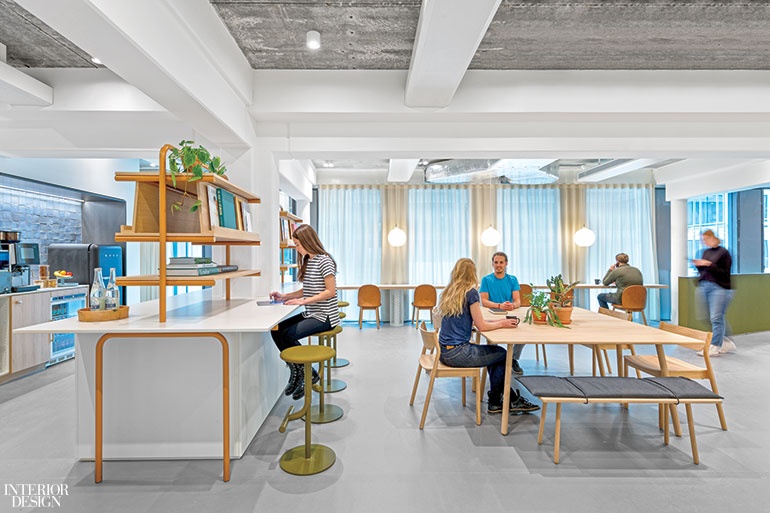 Officially, this is a first-time collaboration between Uber and Assembly/CannonDesign. But principal Liz Guerrero’s connection with the global ride-sharing company, which, at current count, serves people in 450 cities across 65 countries, actually goes back to its roots. While at Studio O+A, she was on the team that conceived the then tech start-up’s first San Francisco headquarters. Later, as co-founder of Assembly Design, she completed additional Uber offices, bringing the total to 11 before this latest, the Uber EMEA headquarters in Amsterdam, under the firm’s newest incarnation.

Guerrero is, naturally, fluent in the Uber ethos, particularly its embrace of local and global. Yet she discovered plenty about this HQ for Europe, Africa, and the Middle East, sited in a 1970’s building, renovated to attract the tech crowd—Amazon has signed on as a tenant. For starters, it’s a free-address workplace, a first for the company. “Uber is trying it out here before bringing it to San Francisco,” Guerrero says of the 86,000-square-foot, four-floor office. Instead of designated workstations, the 500 staffers find their places in neighborhoods.

Divisions are according to geography, one wing per region per floor. Swaths of color assist with way-finding: blues and greens for southern and western Europe, respectively; citrus shades for Africa; reds for the Middle East. The chromatic themes are rendered via furnishings as well as in the graphics by Guerrero and team; they’re all printed on fabric and framed like contemporary art. Meanwhile, plants appear throughout, within greenhouse-esque partitions.

The open office areas encourage staffers to wander about and change positions during the day. “They’re all super-friendly,” Guerrero says of this workforce, a mix of Dutch and expats. Lounges and communal oak tables beckon collaboration. Along corridors, the same wood lines the seating filling niches for more individual work. Phone rooms offer complete privacy.

Amid all the international bonhomie, there is a site-specific component. The spiral stair connecting all floors is encircled by vivid bands, symbolizing the canals ringing the city.