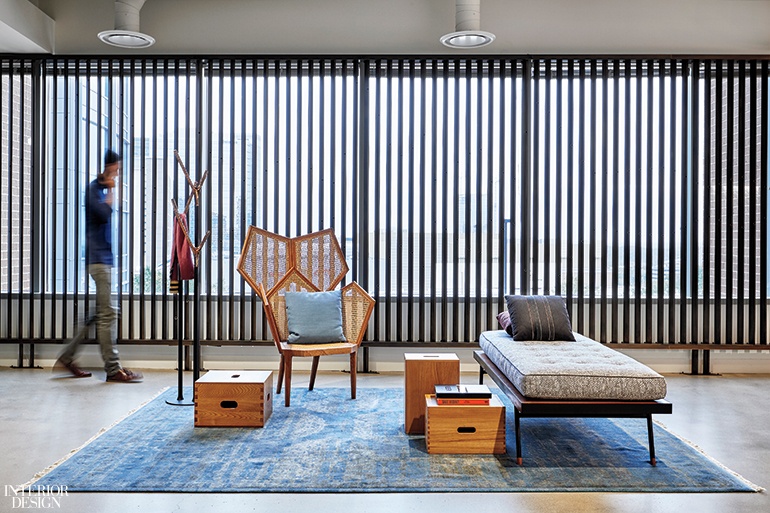 A Lindsay Adelman chandelier dangling from an exposed ceiling crisscrossed with piping is an unexpected sight at a financial-services office. Particularly if that office is in Tysons, an up-and-coming town in the suburbs of Washington. But Capital One, a Fortune 500 banking company, has taken to heart the same lesson that tech and media firms have learned so well: When it comes to hiring and retaining the best and brightest, design really does matter. Guided by a commitment to stylish, flexible settings that allow employees to decide where and how they’ll get their jobs done—and a belief in being an industry disruptor—management has tapped top firms to upgrade Capital One offices nationwide, resulting in workplaces that hold their own with those in any sector. Witness this 20,000-square-foot Virginia office recently rebooted by Gensler.

It occupies a floor in a building on an evolving mixed-use campus a 25-minute metro ride from downtown DC. In fact, the nation’s capitol, where Gensler creative director and principal Todd Heiser roved while heading up the project, provided inspiration for the interiors, which, on any given day, might serve more than 100 product developers, analysts, and engineers. There are also references to the conservative décor of Virginia and even Savannah, Georgia, where Heiser once lived. But there’s nothing obvious about the borrowing. By using conventional elements unconventionally, Heiser and his team both nodded to tradition and turned it on its head.

Consider the space’s long, diagonal main corridor that the designer likens to the grand radial avenues of DC’s master plan by Pierre Charles L’Enfant. Here, it similarly links common and office areas, many of which boast soft decorative notes mixed with more contemporary ones. Amid the predominant polished-concrete flooring, for example, hexagonal tiles that could be found in a Georgetown town house play the role of area rug in a lounge—nicknamed union, after Union Station—where staff might brainstorm ideas for a new credit card or app. Its modern curving glass partition is juxtaposed by mural-like wallpaper depicting leafy, sinuous trees. “We use florals, but in a scale not usually seen, so your reaction is, Wow this space is really interesting,” says Heiser, who admits to “a closet fascination” with intensely flowered “Laura Ashley spaces.” In the same vein, one wall hosts old-fashioned paneling, but it’s painted a saturated medium blue called Newburyport.

Vinyl letters adhered onto the aforementioned partition say the following: “If your actions inspire others to dream more, learn more, do more, and become more, you are a leader.” The quote is often attributed to John Quincy Adams, a Washington insider if ever there was one. But it also speaks to the collaborative nature of this project. Heiser is quick to share credit with the client for the workplace. “It wasn’t the typical relationship with us just showing up and making presentations,” he recalls. “We form a partnership with our designers to help infuse the brand into the space,” Erin Mical, a Capital One senior director, workplace solutions, adds. “Co-creation is our unique approach.”

Unique, indeed. Sprinkled throughout the office are several of what Heiser calls “Easter-egg moments.” One such is dubbed the underground library, intended for quiet individual working. It is not, in fact, underground, but the sculpted plaster on its wall and ceiling suggests the interior of a metro car. The train line is evoked again in a more communal meeting area on the other side of the floor. An expanse of plywood has been laser-cut with a typographical abstraction of DC’s metro map. Opposite it, a run of pendants cluster in groups right up against the area’s enclosure of glass panels, on which circles of white vinyl film represent the glow of the bulbs.

Given these out-of-the-banking-box gestures, you’d think the team would have reined things in regarding furniture selection. But the pieces through­out have a decidedly residential air, mostly of the mid-century variety. Off the elevator stand a trio of Le Corbusier’s LC14 stools being employed as side tables. In the lounge, the famous de Sede sectional follows the curve of the glass partition while standing across from a Hans Wegner Papa Bear armchair. In the café, Michael Thonet’s chairs stand beneath that Adelman chandelier. “The space is high volume and so is the furniture,” Heiser says. Plus, it is easier to move around residential-scaled chairs, tables, and the like to accommodate groups of all sizes—just as the spaces are flexible, so is the furniture. Proving that as eye-catching as the design is, it’s also eminently functional.

Form, flair, and function are especially on display outside a conference room encased in birch plywood. The wood extends in one direction to become a built-in bench, the ideal perch for last-minute presentation prep. Above it appears to be a random ripple of gray felt. But it has actually been molded into the profile of George Washington.