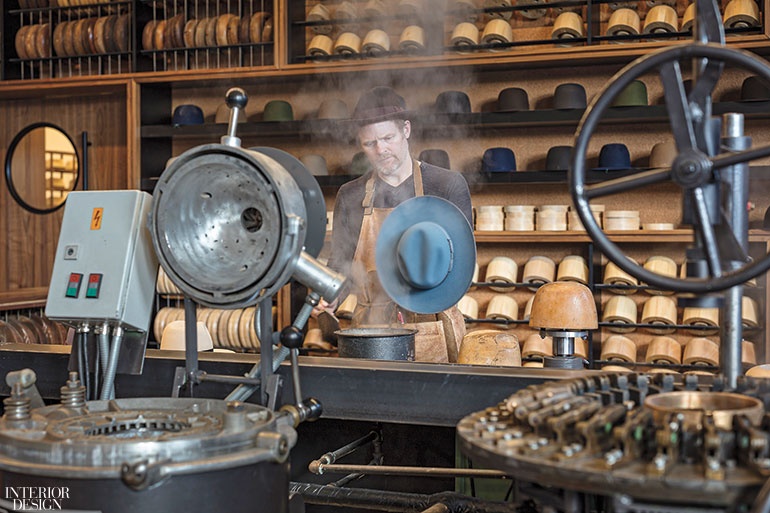 Chicago is renowned for myriad phenomena. Jazz and the blues. Politics. Pizza. And, of course, architecture. But hats? Yes, according to Graham Thompson, founder of Optimo, a men’s hat company based in the city’s South Side. Steady growth over its 25-year existence has called for expansion—and a new space. It comes courtesy of Skidmore, Owings & Merrill, the 82-year-old firm with significant ties to the city.

Thompson has been a hat devotee since he was 16, when he’d saved up for two years to purchase his first one from legendary Chicago hatmaker Johnny Tyus. He eventually apprenticed with Tyus for seven years, and then, upon graduating college and Tyus’s retirement, Thompson bought his equipment and opened Optimo. Last year, when it came time to move someplace larger, he found the ideal venue in a 1914 firehouse about a mile from his original location.

Though derelict for years, the 7,700-square-foot, two-story building was “built like a brick tank,” Thompson recalls. Interiors, though, were another story. “It looked like a bomb went off.” To re-envision it as a bona fide factory and showroom, Thompson’s dream was to enlist SOM. The firm values craftsmanship, authenticity, and timeless luxury just as he does, but rarely takes on projects of such scope.

Fortunately, retired SOM managing partner Richard Tomlinson is an Optimo collector and helped facilitate a meeting between Thompson and the firm. Although a small endeavor, design partner Brian Lee saw an opportunity. “It’s a great story for the city,” the architect says, “helping to continue a rich history of craftsmanship in South Chicago. Plus, the building was in better shape than others we’d seen before.”

Thompson had already gotten the renovation ball rolling by commissioning a pair of gleaming brass-clad entry doors. Then SOM took charge. Masonry was re-pointed and cleaned, especially on the interior, with its grimy diesel residue. Other walls were re-plastered. Upstairs, which is dedicated mostly to the showroom, new stained oak flooring was installed. On the double-height ground floor, the existing concrete floor was sealed and polished. That’s the workroom where each hat, ranging from $395 for straw to $1,000 for felt, gets handmade by Thompson and his seven-person team. Expressed as a contemporary workshop with an industrial aesthetic, its design draws from a palette of understated materials and colors.

To plan the space, Lee first researched the making of men’s hats, which involves blocking, surface- and brim-edge finishing, trimming, flanging, shaping, and steaming—a process that takes from two to six weeks to complete. “It helped us determine the organization of the machinery with the right power and lighting and how much space each machine would require,” he explains. “We ended up falling in love with them,” referring to such pieces as the French steam table that dates to the early 1900’s. (SOM painted all the machines, old and new, a dark gray for uniformity.)

That research resulted in what Lee calls “goal-post lighting,” brawny blackened-steel armatures with integral LEDs and power capability that frame the trio of workbenches arrayed down the center of the workroom floor. Along one side of the space, rolling hat-storage racks lined up between the window bays are framed in the same metal. Toward the back is the walnut and cork hatter’s wall, a nearly floor-to-ceiling construction that houses hundreds of hat forms plus the doors to the sewing and surface-finishing rooms behind it.

The second floor emits an airier, more refined aesthetic compared to the industrial vibe downstairs. But it didn’t start out that way. It had similar proportions to the workroom—“almost too overscale for the gracious feeling we were going for,” Lee notes. So, he and his team tempered the scale by installing a kitchen and an office for Thompson, and then creating a steel pendant fixture 10 feet in diameter to center the remaining showroom space. The fixture is like “an extended wing,” he adds, anchored by cables from a central escutcheon. Below it, a lengthy table crafted from two solid planks of walnut hosts design discussions between Thompson and his clients. He can narrate the history of the hat-making craft with the rare vintage tools and artifacts displayed in the tall steel-framed shelving unit nearby and throughout the atelier—he has traveled to over 15 countries in search of them.

Off the showroom, a portal of walnut repurposed from Thompson’s original hatter’s bench leads to the lounge, the firehouse’s former captain’s room. But what’s a firehouse without a pole? Yes, this venue once had one, but it was stolen. So, Lee and his team decided to fit the aperture with a round of transparent laminated glass. Now, with light from the showroom’s windows streaming deep into the workroom below, craftsmanship is clearly on display.