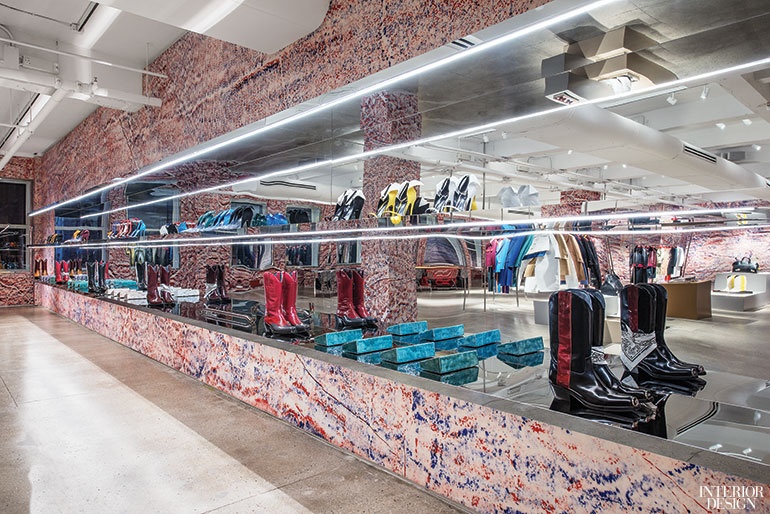 For 50 years, the Calvin Klein brand has defined and refined a particularly American approach to minimalism. It elevated jeans and underwear into status symbols with the touch of a sans serif logo. Interior Design Hall of Fame member John Pawson fashioned its New York flagship into a temple to home goods and apparel that changed the retail landscape for decades, asserting that luxury could feel utterly unfussy.

The brand stumbled in the early 2000’s, but its 2016 appointment of Raf Simons—the Belgian fashion designer who had cut and sharpened his teeth at Jil Sander and Dior—signaled something new. Simons christened his first collection, a blockbuster interrogation of midwestern iconography—think patchwork quilts and cowboy shirts—Calvin Klein 205W39, after the address of the label’s corporate headquarters a few blocks south. Then he went and shook up the building itself.

Simons called in Sterling Ruby, a buzzy artist known for his urethane sculptures covered in U.S. flags with whom he’d designed a one-off men’s collection in 2014, to come have a look at one of the floors. It had previously housed a small showroom and offices, which had been ruined recently by water damage after a fire. Cleared out and cleaned up, the 12,000-square-foot space was a blank canvas. But not for long.

The two decided to devote the entire floor to the showroom, moving the offices to a lower level. For the rest, they reached out to Architecture Research Office—an inspired choice, since the firm was familiar with folding fine art into architecture from its renovation of the Donald Judd home-studio and had worked with the Office of Metropolitan Architecture on the Prada flagship, both in SoHo.

“There was a real, immediate sense that we should respect the integrity of the existing building,” ARO co-principal Adam Yarinksy begins. “Raf was looking to create a whole new world, but build a connection to New York,” co-principal Stephen Cassell adds. Reconfiguring the entryway more than accomplishes the former, with a verve that makes the old Calvin Klein cool seem slightly cold. A long bench barely contains one of Ruby’s stuffed sculptures. The yellow monolith of a reception desk, set on a diagonal, travels beneath ductwork encased in a curved, white sleeve like the line of a highway. “The entry is a simple portal that uses the desk to visually move visitors through to the showroom,” Yarinksy notes. Once inside, though, the walls cannot be ignored.

Vast rolls of canvas with eye-popping streaks and splatters of red and blue acrylic cover almost every inch, including a single, seamless 82-foot-long back wall that required a half dozen installers working simultaneously. Wrapping each column did require a seam, but the team ensured that each fell in the same place on each column, lending order to the frenzied pattern. It even covered electrical outlets. “With a frottage technique, I used rollers and brooms to apply the paint to the raw canvas in my Los Angeles studio,” Ruby explains of his process. Once dry, the canvases were rolled and shipped across the country. “It suggests both the natural landscape and marble veining, but also mimics mechanical cartography. I like that tension.”

The walls actually feel tense, vibrating with the anaglyph effect of vintage 3-D movies. They also call to mind New York’s famed abstract expressionists, who worked not far from the buildings visible through the windows lining two of the showroom walls. To bring the city in, ARO framed the views with polished stainless steel.

A standpipe, painted the mandatory safety red, became another municipal tribute. “We Pantone-matched it,” Cassell says of the color’s appearance on radiator covers and clothing hangers. Bays for the collections mix with rows of display tables for accessories, in a gridded arrangement joined by Ruby’s pompom sculptures dangling from contraptions resembling meat hooks. “We did some 400 renderings,” Cassell recalls, to strike the perfect balance between rationalism and surrealism.

Ruby oversaw an inch-by-inch inspection of each of the ceiling’s existing pockmarks and scratches, patching or retaining the holes until a perfect level of imperfection was achieved. The concrete floor was sealed and polished for a mottled patina that approaches terrazzo. Displays for fall’s candy-colored cowboy boots are Formica in solid blues, browns, and greens, taking the retro material into postmodern territory. The mix of matte and shine returns at the stainless-steel meeting tables, where Harry Bertoia chairs boast cushions upholstered in Ruby’s bleach-spotted cotton.

Ultimately, what at first seems chaotic is totally winning. So much so that the same team is renovating the Paris showroom in a similar expression of American maximalism.