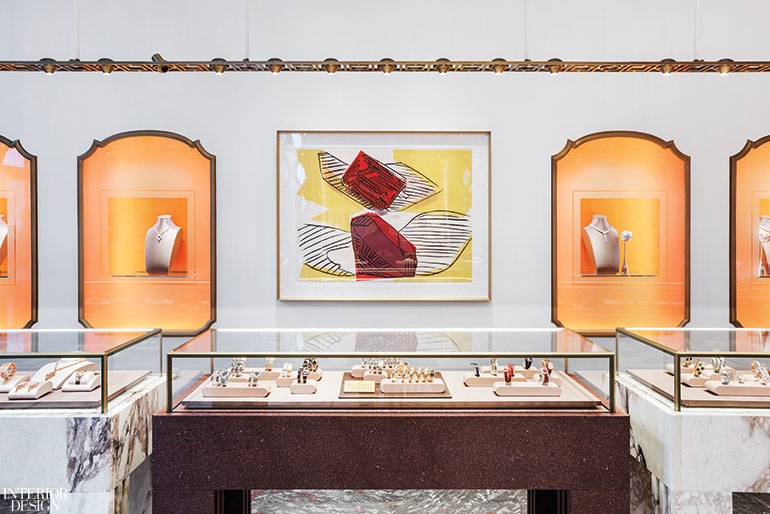 Since 1989, Bulgari has been an ipso facto New York landmark. Its two floors of Italian jewelry and luxury goods have occupied Warren & Wetmore’s 1921 Crown Building on a prime corner in Midtown, keeping company with Harry Winston and Van Cleef & Arpels. But last year, it was time for a refresh.

Think Bulgari, and visions of the brand’s centuries-long heritage in gold, silver, and gems comes to mind. You may also conjure sunny images of the Eternal City, with its terra cotta-toned facades, and thoughts of Elizabeth Taylor and Rome’s Cinecittà, considered the hub of Italian cinema. In other words, la dolce vita. To translate that inimitable glamour architecturally, the company turned to Peter Marino.

The Interior Design Hall of Fame member’s connection with Bulgari began six years with Peter Marino Architect’s renovation of the flagship in Rome, where the company was founded in 1884 and is headquartered today. Then came PMA’s re-envisioning of the London store in 2016. All the while, at the behest of new owners LVMH Moët Hennessy Louis Vuitton, Marino was developing a design language to burnish the brand’s identity, much of which is carried through all three stores. But since both the Italy and U.K. projects were in landmarked buildings, the firm was precluded from exterior interventions. Manhattan was another story, however. There, Marino could tell a tale of continuity and innovation both inside and out. “New York is a younger and more modern city,” he begins.

“I’m a complete bronze freak,” admits Marino, who is an avid collector of Baroque and Renaissance bronzes and a creator of sculptural boxes cast in the ancient alloy. It’s a passion he shares with classical Rome, where bronze was the metal of choice. In Marino’s hands, it became the basis for elaborate grillwork throughout.

Outside, bronze crisscrosses the double-height windows on two elevations, creating “a level of transparency that’s quite a new concept,” the architect notes. “Most jewelers are walled against the day.” The motif—diagonal rhomboids with rosette corners—is derived from an archival sketch for a Bulgari brooch, sadly never created.

For the 4,500-square-foot interior, more bronze screens surround the new statement stairway up to the balustrade along the rebuilt mezzanine. Their matching geometry has deeper historical roots: Its pattern is borrowed from that on the floor of the Pantheon, an intervention Marino had devised for the Rome and London stores.

The same goes for other design elements throughout. For instance, since Bulgari is quintessentially Italian, Marino again looked to the country’s modernist architecture and furnishings for inspiration. For furniture and lighting, he dove into the postwar period, examining work by Gio Ponti, Piero Portaluppi, and Carlo Scarpa. In fact, several of the era’s signature pieces are here. A ’50’s Osvaldo Borsani table in pink marble and mahogany, for example, functions as a display surface in the main jewelry salon, where the central vitrines are anchored by massive bronze bases. A pair of Ponti’s exuberant chandeliers, also bronze, hang from the shallow vault around the salon’s 18-foot ceiling.

Materiality, color, and historicism have been carried through, as well. For materials, Marino homes in on pietra, “classic Italian marbles and rare stones, to be exact,” he states. Here, there are five varieties, their colors and vibrant veining an opulent mainstay of the densely layered palette. Pavonazzetto, or Italian marble, pervades downstairs in columns and stair treads, while Breccia di Stazzema, another Italian marble, appears on the exterior and interior portals. Twinkling red porphyry trims the gleaming marble mosaic floor, inset with a single eight-pointed star at the entry, while white Thassos marble borders it.

“Yellow, orange, red. I hadn’t done a store with those colors before,” Marino continues. “For me, it’s stepping out”—into the light of a Roman summer afternoon, as it were. He’s referring to the apricot silk lining the display niches, another gesture spearheaded in the Rome flagship. He has not only repeated it in New York but also built upon it. In the mezzanine lounge, also known as Maison Bulgari, a silk blend in the same color upholsters the sectional sofa, its silhouette inspired by Borsani originals.

That lounge functions as an event space or, with its separate VIP room, a private sales area. But here’s one of the ways the New York store differs from Rome and London—and, actually, most other jewelry stores: The high-end pieces are not cloistered away in off-limit rooms. Customers and tourists alike can gape at five- and six-figure jewelry and watches right up front. Toward the back, the flooring changes to Italian walnut, a warm backdrop for the selling of bridal and other accessories such as Bulgari fragrances.

Undoubtedly, the setting is glorious. And of course, glamorous. Taylor, arguably the epitome of glamour and Bulgari’s most famous client, is memorialized with a commissioned artwork by Campagnolo & Biondo. Andy Warhol, who coordinated a meeting between the actress and this architect when he had them both to his Montauk compound in the ’70’s, may have been as enamored of oversize gems as the movie star, creating a series of screen prints to prove it. One of them hangs in the store between the niches showcasing watches.

Another purely New York characteristic of this project is Marino’s representation of the city’s energy. It’s apparent on the exterior grillwork: At dusk, LEDs behind each rosette pulse in changing patterns. “Between the neighboring high-end stores, Bulgari wins.” Italian glamour and American pizzazz—now that’s an unbeatable combination.