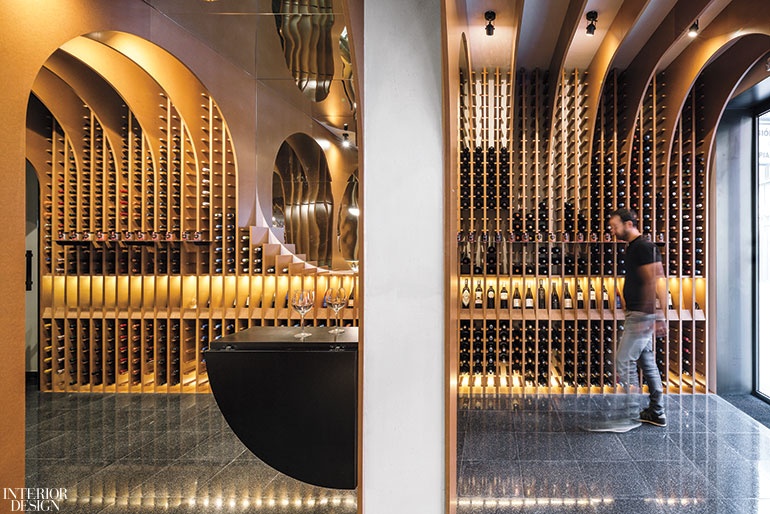 Valladolid, a large Spanish city about a two-hour drive northwest of Madrid, sits at the confluence of two rivers surrounded by five distinct wine-growing regions. It’s a prospective destination for oenophiles who favor such eminent Denominaciónes de Origen as Toro, Rueda, and Ribera del Duero, the last a recent Wine Enthusiast “region of the year,” thanks to its famed dark Tempranillo grapes.

Although Valladolid is no tourist haven—it’s a hard-working metropolis with a buzzing economy—it is known for its mucha marcha, or ebullient nightlife, provided by busy cafés and tapas bars, great restaurants, and appealing stores, an intriguing new wine shop among them. Set behind a modern facade on a motley streetscape a few steps from the city’s Old Town, De Vinos y Viandas is Zooco Estudio’s contemporary homage to the region’s famed underground wine bodegas—an imaginative update of the ancient vaulted cellars, built by Benedictine monks, that populate the rolling hills of northwest Spain.

Zooco, which is derived from the name of a Spanish liqueur and pronounced “though-co,” is a 10-person firm led by partners Miguel Crespo Picot, Javier Guzmán Benito, and Sixto Martín Martínez. It’s best known for creative restaurant design, such as the zenlike La Maruca Santander in Madrid. This time, the team took archetypal forms and elements from traditional Spanish oenology, distilled them down to a few essential architectural gestures, and conjured an evocative retail interior. The stone vaulting of subterranean cuevas, or caves, the roundness of oak barrels and glass bottles, and even the structural cross-bracing of cask and wine racks are all recalled by the store’s main abstracted component: a series of room-spanning arches and closely spaced ribs, made of low-cost varnished MDF, that traverse the length of the 430-square-foot space. “The concept’s common thread is circumference,” Martín Martínez explains. “We imagined a geometry that expresses the world of wine, and that became our guiding principle for the project.”

Working with a recently vacated storefront, as featureless as it was diminutive, Zooco used its system of arches and ribs—18 in all—to define the long, narrow space both vertically and horizontally. On the walls between each set of ribs, columns of stacked wine bottles, cradled in orderly MDF shelving, rise from floor to ceiling. The vertical rows are interrupted by a waist-level horizontal band of illuminated niches for the display of upright bottles. Another interruption to the regimental system comes in the form of wavy, acrylic mirrors, some of them semicircular, inserted in strategic places on the walls and ceiling. To the architects, introducing reflective surfaces seemed a natural way to open up and enliven the interior, according to Crespo Picot. “Since the space is very small, we first proposed mirrors as a spatial multiplier,” he says. “We added the rippled-water effect later to complete the notion of barrels, as if the circles contained some kind of liquid.”

The shop’s name, De Vinos y Viandas, which literally translates to of wines and foods, indicates that additional items other than the 1,000 or so bottles lining its walls are available for sale. At the center of the space, in a circular opening beneath an arch, a refrigerated vitrine displays cheeses, chorizos, and other sausages. They can be sampled, and wine tasted, at a black semicircular folding table mounted on an adjacent column. In the storefront, next to the entry, a wooden bar-height counter cantilevered below a horizontal bifold window allows customers to enjoy a glass of wine in the open air, connecting to passersby in the cobblestone street in true Castilian fashion.

Seen from the sidewalk, the little vinoteca’s dark, polished terrazzo flooring adds to its moody, cellarlike vibe. Together with the arches and mirrored surfaces, they engender a sense of expectation—that there are new discoveries to be made, new experiences to be had, new vintages to be found in its welcoming depths. As Guzmán Benito puts it, the materials and forms create “an atmospheric world of reflections.” But it’s a world that’s as practical as it is poetic. Those cleverly integrated racks not only allow staff and customers easy access to the wine but also hold the prone bottles at exactly the correct angle for short-term storage. That the rib shelving also suggests classical order—articulated base, fluted shaft, necking, and entablature—epitomizes the way Zooco transforms the metaphorical into the functional.

But more than creating a great neighborhood wine boutique, Zooco has elevated it into a potential stop on every informed oenophile’s international pilgrimage. Without ever being overly literal—there are no photographs of favored vineyards on the walls, no bouquet of Rioja pumped into the air—De Vinos y Viandas turns Spanish wine tourism into an intimate, truly modern experience. Valladolid might well prepare itself for an influx.