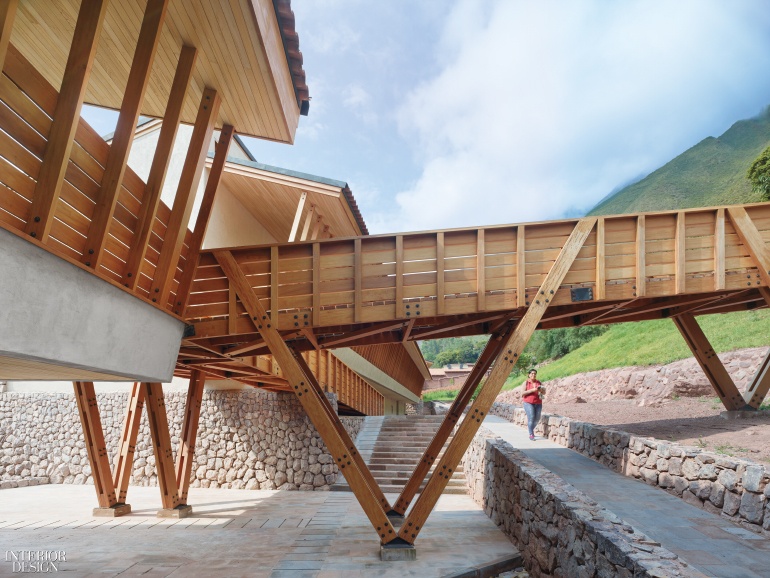 From the city of Cuzco, Peru, the journey to the Inca citadel of Machu Picchu offers staggering beauty, with snow-topped Andean peaks and Spanish colonial villages full of Quechua color and buzz. Much of that trip, 35 miles, is through the magical Valle Sagrado de los Incas, aka the Sacred Valley. At the foot of the mountains in the town of Huayllabamba, the lush scenery has now been joined by a low-key hotel, a completely fresh and inventive statement by the award-winning José Cruz Ovalle Estudio de Arquitectura.

Explora Valle Sagrado is the seventh venture from the Explora travel company, which had previously pioneered hospitality in far-flung parts of Bolivia, Argentina, and Chile. José Cruz Ovalle designed two of the Explora hotels in his native Chile, one of them in Patagonia and the other on Easter Island, over a period that stretched between 1991 and 2006. Explora subsequently brought Cruz to the Sacred Valley, tasking him to conceive another attractive yet unfussy base from which guests could trek to places as remote as they are astounding. This commission became arguably the most challenging, prolonged into an 11-year adventure due to the topography and history of the site—stretching alongside a river by a sleepy hacienda, surrounded by fields.

Even in the design phase, architectural shapes and exterior materials were monitored strictly by archaeologists hired by Explora and Peru’s national preservation commission. They then identified buried Inca ruins, unearthed during the initial hand-excavation required for the foundations. “We had to change the location of the hotel three times, every time creating entirely new solutions,” Cruz says. “One change, involving both the general shape and materials, was absolutely radical.” The result is an elegant, decidedly athletic complex that appears as a convoy of long, white buildings with wide wooden verandas and traditional Peruvian tiled roofs. Ascending and descending to the rhythm of the surrounding landforms, the structures carefully incorporate the ruins of the Incas’ stone terraces and walls, vestiges delicately supplemented by paving and additional walls in a series of connecting patios bridged by overhead walkways. The restrained palette defers to the experience of nature.

The five main buildings form a meandering line, with the lodge at the center. Service buildings cluster at one end. At the other end stands the house where the outdoor guides live. Most of the 99 acres, however, remains open: three large, flat fields where corn and quinoa are cultivated in the rich soil, reputed to be the finest on earth. On the far side of the fields, Explora renovated a house where 18th-century independence hero Mateo Pumacahua once lived—it’s now the hotel spa. Original frescoes on the facade have been restored, while the interior boasts massage rooms, steam baths, and saunas.

Back at the lodge, the hotel’s social zone, the double-height ceiling is supported by columns built with the trunks of trees brought from the general contractor’s own land in Peru’s Amazon rain forest. Three lounges with fireplaces are modestly outfitted, as are the dining area and the bar. There’s also a shop for trekking gear. To speak to the guides, try their office on the mezzanine. A meeting room is found on the lowest level.

From the lodge’s core of activity, guests climb ramps or stairs and cross bridges to reach the 44 standard rooms and six suites. Cruz lined them with different species of native hardwood, a blonder type for the paneling and slatted walls contrasting with a reddish-brown type for the floorboards. Custom touches are everywhere, from the alpaca blankets on the beds to the love seats and armchairs upholstered in pale blue wool. Interiors should transmit the “vibrations” of handcraft, he explains, just as the hotel’s architectural forms reflect the lay of the land and Incan engineering. “The visual and the tactile acquire a certain balance, giving the spaces vivacity,” he continues. The bespoke furnishings were made by local artisans. Outside, all the stone, native to the site, was likewise worked by hand.

In this way, visitors entering the hotel experience its architecture as a symbolic first foray into the unique landscape of the Sacred Valley. Excited about mountain adventure when they arrive, they return weary to seek refuge at day’s end. It’s the warm embrace of this special place and perhaps, as some Peruvians might say, of Pachamama, the Inca earth mother.

> See more from the January 2018 issue of Interior Design