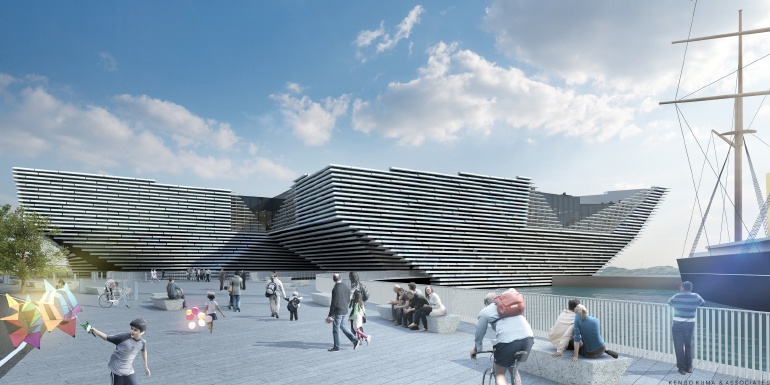 Any list of the most significant architecture projects of the coming year will inevitably feature an abundance of superlatives. We can look forward to the world’s largest airport terminal in Turkey, Europe’s tallest building, and, perhaps more modestly, Scotland’s first dedicated design museum, which also happens to be architect Kengo Kuma’s first building in the United Kingdom.

Skyscrapers are set to dominate the architectural agenda in 2018, with the offices of architects Renzo Piano and Richard Rogers completing significant towers in New York. The world’s tallest residential tower in Mumbai, India, will also welcome its first residents, while several skyscrapers under construction in China could end the year among the world’s top ten tallest buildings.

Architecture fans will converge on Venice for the 16th International Architecture Exhibition, which will be curated by Yvonne Farrell and Shelley McNamara of Irish firm Grafton Architects. Several innovative stadiums should be completed in time to host the world’s top soccer stars during the FIFA World Cup, and London is preparing for the first trains to roll into ten stations constructed along the route of the new Crossrail railway. Keep reading for a look at some of the key projects due to launch over the next 12 months.

The opening of a new Victoria and Albert museum outpost is set to reactivate the Scottish city’s waterfront by attracting up to 350,000 visitors a year to the country’s first design museum. The building’s inclined stone-clad facades are intended to resemble a cliff face emerging from the sea.

Following the completion of his Whitney Museum of American Art last year, Renzo Piano’s first residential project in New York is rising above the Freeman Plaza approach to the Holland Tunnel. Two 30-story towers will accommodate 115 apartments starting at $970,000 for a studio.

Set to become the largest archaeological museum in the world, the Grand Egyptian Museum will partially open in 2018 after years of delays that have seen costs spiral to more than $1 billion. A triangular motif repeated throughout the design echoes the forms of the nearby pyramids.

Described by its developers as the “world’s first free-form exoskeleton high rise,” this sculptural hotel in Macau’s City of Dreams complex features large voids carved into its monolithic form. The exoskeleton mesh embraces a reinforced-concrete core to provide lateral stability.

Scheduled to open officially on Turkey’s Republic Day on October 29, 2018, Istanbul New Airport will handle more passengers than any other airport in the world once fully operational. The world’s largest terminal under one roof will feature vaulted ceilings and references to Istanbul’s architectural heritage.

The pixelated volumes forming the base of Büro Ole Scheeren's Guardian Art Center in Beijing are informed by its context in close proximity to the historic Forbidden City. The plinth supports a monolithic hollowed-out volume that allows light to flood into the museum, event space, and lifestyle center.

Heatherwick Studio is transforming a pair of disused Victorian warehouses into a new public space and retail destination as part of the ongoing renewal of London’s Kings Cross district. Swooping extensions to the existing gabled roofs will form a canopy over a cobbled yard at the heart of the project.

The latest building to complete at the World Trade Center site will be the 80-story tower designed by Pritzker Prize-winner Richard Rogers's London-based firm. The building features a podium dedicated to retail, with offices and trading floors accommodated in stepped volumes that reduce the tower’s mass as it rises.

Located on the coast of the Gulf of Finland, this huge mixed-use complex in the Russian city of St. Petersburg will center around Europe’s tallest skyscraper. A free public observation deck at an elevation of almost 1,200 feet will provide panoramic views of the city and its surroundings.

Upon its completion, World One will be the tallest building in India and the tallest residential building in the world. The 117-story tower will feature interiors designed by Giorgio Armani and will contain 290 apartments, a swimming pool, gym, health club, and its own cricket pitches.