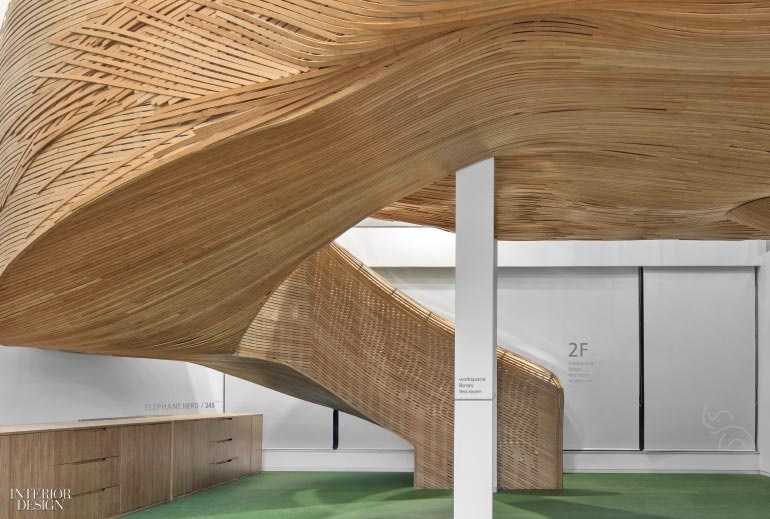 The phrase “elephant in the room” gains new meaning, thanks to Cun Design. Only this elephant is something that everyone is talking about. A staircase, elephantine in size and presence, even curves like a trunk as it winds through the Beijing marketing agency Elephant-Parade—a standout in an otherwise orthogonal design. Cun Design’s founder, Cui Shu, says that the irregular shape was not simply design for design’s sake. Connecting the four-level office’s topmost two levels, the staircase fills an area that was complicated by existing beams. “We came to think of the trunk shape as a way to solve problems and organize the space,” Cui says.

It would be easy to read Elephant-Parade’s name as his source of inspiration. The agency, 300 employees strong, is mammoth in its own right. The sweeping curves might also be influenced by his fondness for skiing and auto racing, with their spiraling dynamism. “I like to try new things and challenge myself,” the 36-year-old says, adding that he takes the same approach to design as to sports.

On a more purely architectural note, he cites a quote attributed to Antoni Gaudí: “The straight line belongs to Man. The curved line belongs to God.” Furthermore, straight lines are expressions of the rapid pace of urban life, whereas the curve is “what really makes our hearts relax,” according to Cui. “We feel like we are walking in a distant daydream.”

The hefty mass of the stair is softened by its natural material, bamboo, chosen because it is simultaneously tough and pliant. Despite a long history in the architecture of China, bamboo is more commonly used today for outdoor scaffolding than for indoor surfacing. Here, it is essential to the interior design, allowing the elephant trunk to exist. It makes use of bamboo’s ability both to create sharp edges and to form smooth curves—stacked into balustrades and bundled into handrails. The strips’ long, thin silhouette and pale color produce intricate patterns. On the interior of the balustrades, the strips run in regular, parallel lines. On outer surfaces, waves overlap in an almost painterly fashion. “There is always a shadow of art in design,” Cui says.

However, the stair is not Elephant-Parade’s only outstanding feature. The bulk of the 44,000 square feet is necessarily given over to office areas, some of them surrounded by waist-high dividers in bamboo stained green, setting them off from the prevailing whiteness. “We alluded to live bamboo’s color to make people feel relaxed,” he says, noting that employees spend more time at work than at home—thus the office should feel like a second home. A few scattered enclosures, meanwhile, help to bring down the scale of the project and, he points out, make good use of some otherwise wasted areas.

Those enclosures are for specific functions, say holding meetings or printing documents, and call out for special attention. Another highlight is a meditation room, which also hosts informal gatherings and tea-drinking. Stained oak veneers three of the walls, while the fourth is glass, with a river view and a door opening onto a balcony. Stretching across the center of the floor is a long elm bench bought at an antiques market.

The traditional aesthetic of the bench contrasts with its contemporary surroundings, but this is not a contradiction for Cui. His thinking was influenced by working for many years with one particular furniture craftsman. “He taught me that ancient Chinese culture can affect contemporary design. The value of culture lies in how to turn it into current wisdom,” Cui says. Elephant-Parade’s striking staircase might suggest up-to-the-minute trends in visual language. In using bamboo, however, to create the innovative intervention, he nods to the millennia of Chinese designers who have come before him.