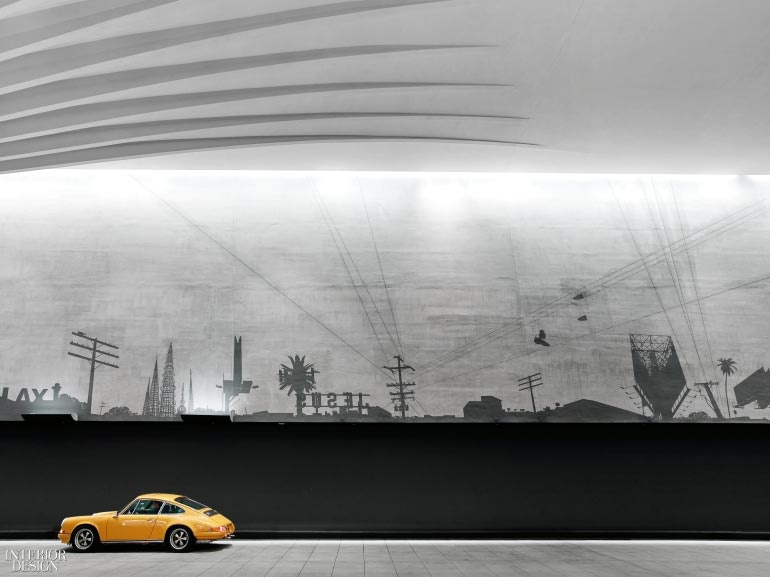 It seems like just yesterday that David Martin presented journalists with the architectural model for a mixed-use project that would alter the Los Angeles skyline—and claim fame as the tallest building west of Chicago. Actually, it was 2011. Martin, then design principal of AC Martin, revealed a tower component, with 19 office levels followed by a hotel spanning 31 through 73 and a spire reaching 1,100 feet. At the bottom, a seven-story podium was capped by a pool terrace, to boast a poolside bar with buoy-inspired pendant fixtures as well as a cartoon-like mural of synchronized swimmers in retro red bathing suits.

Over the following years, we monitored progress. From an adjacent office building, we gazed down into the gargantuan hole in the ground. We watched the foundation’s celebratory “big pour”—at 1,180 cubic yards, it was promoted as the world’s largest continuous flow of concrete. We viewed numerous guest-room schemes, toured the site during framing, and overcame acrophobia during a hard-hat tour that involved an open-air climb to the roof deck at 800 feet. At the 2017 opening gala for what is now called the InterContinental Los Angeles Downtown at Wilshire Grand Center, owned by Hanjin International Corporation/Korean Air, we were among the guests. By this point, the next generation at AC Martin had taken over. Another milestone: The InterContinental is the 110-year-old family firm’s first comprehensive hospitality interiors project. It was led by design principal Christopher King, director of design Sandra Lévesque, and project director for interiors Michelle Sterling, who gave us the grand tour.

The 1 million square feet include a street-level entry, a sky lobby up on 70 reached via high-speed elevators, 899 guest rooms and suites, three restaurants, two ballrooms, and a gym. For sure, AC Martin needed figurative conceits to tame the vastness. “Each space has its own identity and personality—like the characters in a movie, playing together in the bigger story,” Lévesque says.

Sterling adds, “We’re trying to dispel the myth of L.A. as a vast valley with no soul.” Because the project clearly celebrates the city’s renaissance, it seemed fitting to evoke Reyner Banham’s book "Los Angeles: The Architecture of Four Ecologies." AC Martin took the beaches, flatlands, foothills, and freeways alluded to by the title, then added a fifth, the culture of downtown. For hotel guests, arrival by car, that archetypal mode of local transport, occurs at a porte cochere that spans a city block—with a mural that evokes sights from the LAX sign to billboards and palm trees. “It’s like driving through L.A. at dusk,” King says. “Celebrating the mundane.” The silhouetted images derive from photographs that he took.

Bona fide blue-chip art follows in the entry, where three walls are covered by a Doh Ho Suh installation comprising tens of thousands of multicolored resin pieces. For those who wish to sit and take it all in, massive sculptural benches are provided. To the side, double-decker elevators whisk guests to check-in at the sky lobby, whence L.A. never looked so good.

Once guests turn away from the view, the sky lobby has to hold its own. So AC Martin filled the triple-height space, half the length of a football field, with plenty of eye candy, subtly evocative of the city of dreams. The enormous chandelier, for instance, is a swoopy composition in white, yellow, and red, referencing car headlights and taillights as seen at intersecting freeways. Rugs bear further witness to King’s photographic prowess. They’re abstractions of his shots taken during night landings at the airport.

Seating groups, arranged in grids like the flats of Beverly Hills, mix recognizable pieces by Arne Jacobsen, Jean Prouvé, and Interior Design Hall of Fame member Patricia Urquiola. They’re punctuated by the building’s diagonal beams, wrapped in cream leather. At one end of the sky lobby, there’s a cocktail lounge where the gleaming book-matched marble of the bar and floor are from the quarry that Michelangelo once owned in Forte dei Marmi, Italy.

A white corkscrew staircase at the lobby’s other end spirals both down and up. Below are the hotel’s two casual restaurants. Above is the fine-dining steakhouse, La Boucherie. It’s conceived as the story of two protagonists, polar opposites. One is the rustic California cowboy, the vaquero— he appears on a photomural in the restroom. Less expected is the curvy, feminine persona of Marie Antoinette, expressed less literally by rosy marble tabletops and brass-trimmed banquettes.

Photomurals are also a key element in the guest quarters, which range from 400-square-foot rooms to corner suites and the presidential suite, logging in at 4,000 square feet. Each image interprets one of the “four ecologies” from Banham’s book. Referencing flatlands, the fine-art photographer, pilot, and architect Jeffrey Milstein contributed an aerial shot of houses and swimming pools. Then AC Martin had them emblazoned with the words California Dreaming.