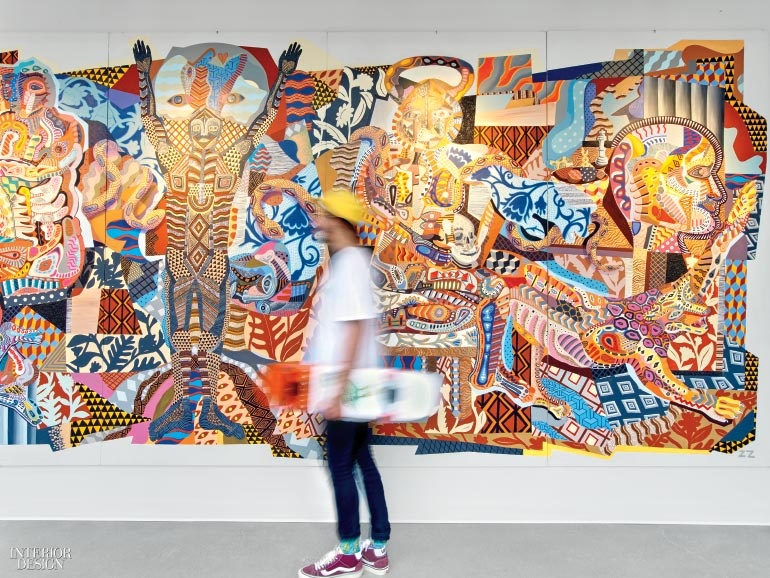 With more than half a century of experience outfitting serious skateboarders and wannabes alike, the Southern California brand Vans started out as a local favorite among boarders-in-the-know—founded by brothers Paul and James Van Doren and their friends. It eventually turned into a footwear and apparel behemoth with worldwide reach, needing a headquarters to keep up with that growth. So the family-run company, deciding to pack up its 500 employees in suburban Cypress for more accommodating premises in bustling Costa Mesa, brought back Rapt Studio, which has both a 17-year relationship with Vans and an impressive track record of breathing a fresh-faced spirit into office environments. Rapt’s executive creative director, David Galullo, stepped back and dispatched a team of thirty-somethings to make it all happen.

Their primary task was to develop a physical identity that reflects the maturity of Vans without diluting its youthful essence. “Vans had been these kids, these underdogs,
for so long, and now it’s one of the top revenue generators for its parent company, VF Corporation,” project architect Keith Boyce Muller, age 36, points out Derrick Prodigalidad, a 33-year-old senior project manager, chimes in: “When you look at the product, Vans isn’t just targeting skaters anymore. It’s elevating itself in the fashion world.” Project designer Rosela Barraza, the baby of the group at 31, says the objective was “to challenge Vans to get out of its old ways—because we’re designers who don’t like to do things the normal way that everyone else does.” The other project architect, Scott Alan Johnson, also 33, adds more seriously, “Rapt’s job in supporting the Vans culture was about creating a functional backdrop where the range of creativity can take on a life of its own.”

However you see it, Rapt’s interior represents a 180-degree turn. Barraza describes the former base of operations as “a mess of an office,” inherited from previous tenant Panasonic. It was a two-year process to transform the 182,000-square-foot new building, which sits just off a major freeway, into a proper home, taking the sunny mood of California and mid-century modernism and interweaving them with the Vans aesthetic.

“When you think of skateboarding, it’s easy to go in a gritty, grunge direction,” Muller says. However, after spending time in focus groups with the various departments, Rapt embraced the brand’s family-first ethos. “It helped that we all knew Vans before coming on the project,” Prodigalidad adds. “We all grew up wearing Vans.” Even if he wasn’t born yet when Sean Penn made black-and-white checkerboard slip-on Vans famous in "Fast Times at Ridgemont High" in 1982.

The result of all the research, combined with personal experience, is a headquarters that feels like an indoor skate park—just one that happens to have an HR department. “You’re always looking into the central courtyard,” Barraza says. “Walking around, you have that visual.” In the reception area, a built-in concrete bench pays tribute to the former Belmont Benches, a seminal skateboarding spot in Long Beach. Stickers from Vans advertising campaigns and California skate culture, in general, dot surfaces throughout. Sealed plywood is everywhere. Concrete flooring is also sealed, an ideal material if you like to skate between meetings. For now, the surface still looks new and unused. “It’s not beat up and smudged with wax yet. That takes time,” Muller notes. He’s an expert, having grown up skateboarding, natch.

Some other elements are intentionally unfinished. “We gave them a beautiful blank canvas that they can continue to work with,” Prodigalidad says. “The idea was to allow them to add, so the space evolves as they live in it.” That explains the occasional unpainted wall, Muller notes: “There’s going to be a whole new level, with the underground artists that Vans has ties to and is bringing in.”

Of course, there are already many murals in place, their large scale combining with the ceiling height and the massive beams to give a visitor a child’s-eye-view sense of awe. In addition to the swaths of workstations, the expanded headquarters features multiple break-out areas and pantries, five product showrooms, a model “store,” a jam room for musicians, fitness rooms, and a lounge styled as a library. As Muller puts it, “You’d never know that this company, which has made such a global impact, was started by a few kids out of Huntington Beach.”