Nathanael Dorent and Lily Jencks Conceive Stone-Clad House Near the Estate of Her Father, Charles 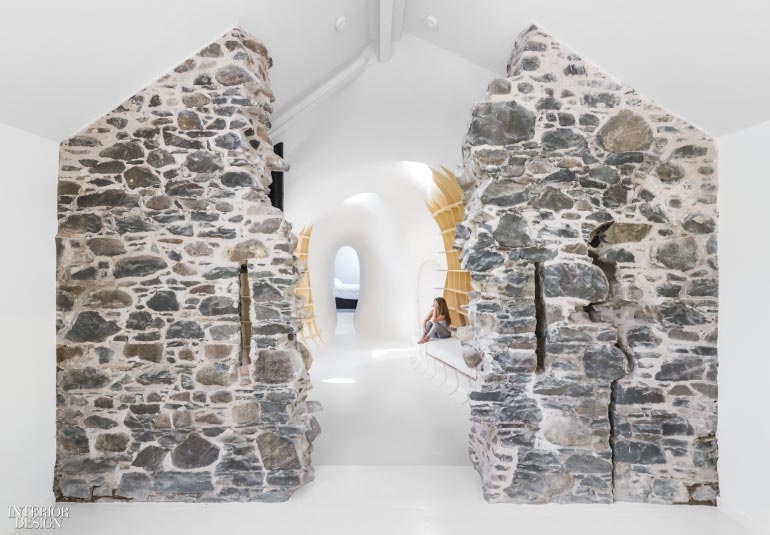 When it comes to delivering the unexpected, Nathanael Dorent and Lily Jencks, respectively 33 and 35 years old, have already developed a reputation. The pair transformed a tiny tile showroom in London with an installation of porcelain planks, playing cleverly with geometry in just four shades of gray to achieve a dazzling op art effect—a tour de force that landed right on the cover of Interior Design. Now, with a weekend house in Scotland, Nathanael Dorent Architecture and Lily Jencks Studio have defied expectation in very different ways.

Constructed inside the ruined granite walls of a cottage more than 200 years old, the new house conforms to its predecessor’s skinny dimensions, measuring 88 feet long by a mere 13 wide in some places. The interior is an explosion of invention, energy, and light. “It’s about difference and otherness,” Jencks says.

There’s a multifaceted quality to much of Jencks’s work, since she practices both architecture and landscaping. She also happens to be the client for this particular project. “That did give us a lot of freedom in terms of the design,” Dorent says.

While Dorent lives in Paris, Jencks is in London. The pair met at an architecture seminar in Philadelphia a decade ago, then reconnected later. They knew they wanted to work together. “We are both interested in collaboration, and we have complementary approaches,” Dorent says. “Hers is more about art history and landscape. Mine is more scientific.” Jencks also collaborates with her father, Charles, the celebrated architect, landscape designer, and cultural theorist, in a partnership called JencksSquared.

The ruined cottage was on farmland near her family’s Dumfries estate, Portrack House, where her father created the 30-acre Garden of Cosmic Speculation. Back in 2010, the younger Jencks started thinking about building a house inside the ruins. By the time work began, however, she was married and had a child. She’s since had a second.

From the outset, plans called for a bedroom at each end, joined by a curvy communal space. This sculptural centerpiece, Jencks says, “started out as a very extreme thing, with a sloping floor.” In the end, though, practicality won out. “We came to a compromise about good living space,” she says. “There are still ramps into the bedrooms, but the kitchen and sitting room’s floor is flat.”

While the sloping floor didn’t make the final cut, other intellectual concepts did inform the project to its end. “We researched ideas of layering, the interaction of different typologies,” Dorent says. The result, in more literal terms, is ancient stone walls surrounding a pitch-roofed box clad in conspicuously contemporary man-made black rubber. That envelope, in turn, contains a curvaceous white shell defining the 1,900-square-foot floor plan.

“Each layer is as different as possible. The impenetrable exterior, the soft interior—you could say it’s masculine and feminine,” Jencks explains. “We talked about the interior as being like the internal organs of the body, too.” Indeed, you could describe it as something like an alimentary canal. In yet another metaphor, the orthogonal outside and fluid inside reflect the surrounding countryside, which Jencks has known all her life: the straight lines of stone walls cutting across the rolling hills.

The interior shell was designed digitally to generate a 3-D printed model. A company that makes complex works for artists, including Anish Kapoor, then prefabricated full-scale sections from CNC-cut plywood sheets. Each section had to be small and lightweight enough for a two-person team to handle on-site, without a crane. “We devised everything at a human scale,” Jencks says.

For insulation and acoustics as well as to achieve the sculpted form, Styrofoam blocks were added in front of the plywood elements, then shaped by hand. Next came a rough coating of glass-reinforced plastic, painted white. “Instead of a smooth finish, it has some materiality to not feel plastic-y,” she continues. That sense of craft and humanity pervades the project.

So does ecological sensitivity. Virtually off-the-grid, the house is making as little impact as possible on the unspoiled countryside stretching for miles. Water is piped in from a neighboring farm, and solar panels provide electric power. Besides, with the huge windows, the white surfaces, and the northern latitude, Jencks doesn’t even need to turn on the lights until 10:00 PM in the summer.