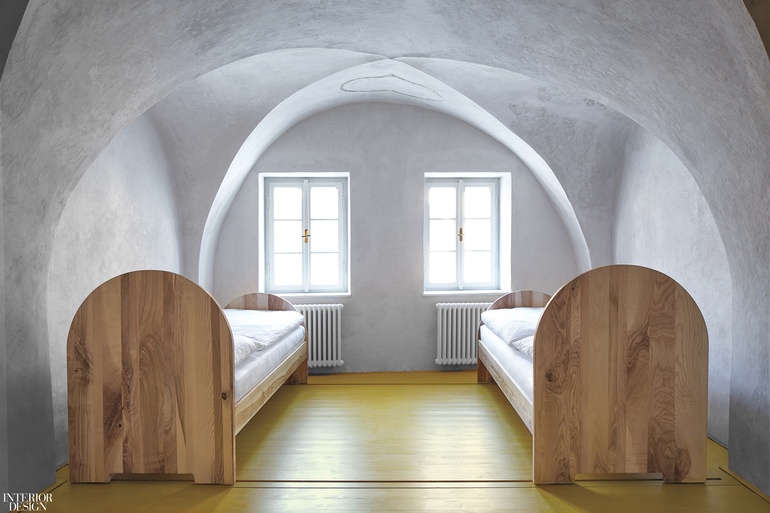 Each and every altera­tion to the landmarked facade in the town of Mikulov required the approval of the Czech Republic’s National Heritage Institute. “When it came to the furnishings, however, we could do exactly as we wished,” Jan Hora says. “Our aim was to make everything as abstract and contemporary as possible.”

Hora is a partner at ORA, an acronym that stands for Orig­inal Regional Archi­tecture, and the firm was transforming the building, a house with a storefront below, into the Štajnhaus, a guest­house aimed at visitors to the surrounding Mora­via wine region. There are five simple, bright rooms and suites, each unique—identified as Blue, Green, Yellow, Gray, and White after the color of the floor’s glazed spruce.

They have only one common element, the lack of straight walls. “Builders’ instinct is to make things straight, but we told them to preserve the curvature of the original walls,” he says. The oldest part, a two-level cellar, dates to the 16th century. That’s when an influx of Jews expelled from Vienna settled here, establishing a large community that endured until the arrival of the Nazis.

In the Communist era, the house was fitted with cheap windows, and Hora found the entire place riddled with damp and otherwise in a state of deep disrepair. He had skilled craftsmen restore the centuries old plaster, rather than replacing it, and also fabricate the heavy ash doors and iron door handles to measure. Steps for the staircase were hewn from massive oak beams.

At the base of the stairs, by the entrance, look up to see a Star of David composed of basic linear fixtures.

“We opted for an unadorned style to show that this was not the house of a rich person,” Hora says. “There was never any luxury here in the past.” Archives note that previous tenants included a barber and a carpenter.