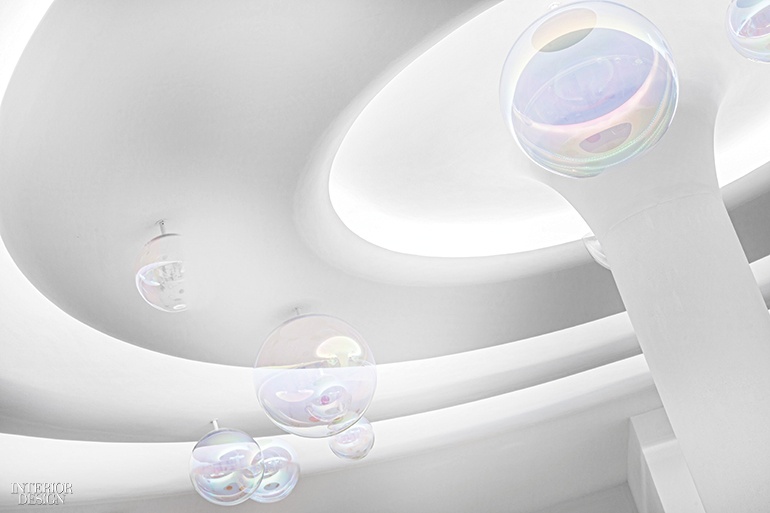 A fixture of the vibrant arts scene in Germany’s capital, what’s now known as the Wintergarten Berlin opened in the 19th century and survived the decadent 1920’s before being destroyed by a World War II bombing raid, eventually reopening in 1992. Since then, the theater has continued to draw performers of all stripes. It has also attracted design talent. Operating as Bennett & Böhme, Fiona Bennett and Hans-Joachim Böhme—whose first collaboration was the Fiona Bennett millinery shop that they own and operate together, right across the street from the Wintergarten—have now expanded from fashion to interiors with a reinvention of the theater’s basement, home to the restrooms.

Bennett and Böhme jumped at the chance to reconceive the 3,000 square feet, already built out by Meyer-Rogge + Kutsche Architektur, as an immersive art installation.
“No standard white tile or fluorescent lighting,” Böhme says. Bennett adds, “Behind all of it lies the concept of infusing a functional space with grace and poetry.”

The first flush of excitement, so to speak, is a white marble staircase that sweeps down from the theater lobby to a lounge. Plush red button-tufted velvet-covered ottomans are scattered about the mosaic tile flooring, flashing hints of gold. Overhead, clear glass spheres are suspended from a ceiling sculpted into concentric rings around a central column. Just as whimsical, the restrooms proper feature separate concepts for each sex. Ladies first proceed to a makeup area. Here, rounded mirrors sprout from a column crowned with coppery leaves, while sinks line two walls. Step in front of the sinks, and the mirrors above come alive with goose feathers blowing around your reflection—a surprising and fanciful feature. A corridor framed by asymmetrical black arches then gives access to the women’s 12 stalls. On the men’s side, blue sets an “underwater” tone, and lighting magnifies the shadow play, with giant tropical-looking foliage outlined on the wall.

“People should not have to leave the wonder and enchantment of the performances upstairs,” Böhme explains. In the Wintergarten’s basement, the show goes on.