Wutopia Lab Creates a Spectacular Display for a Zhongshuge Bookstore in Suzhou, China 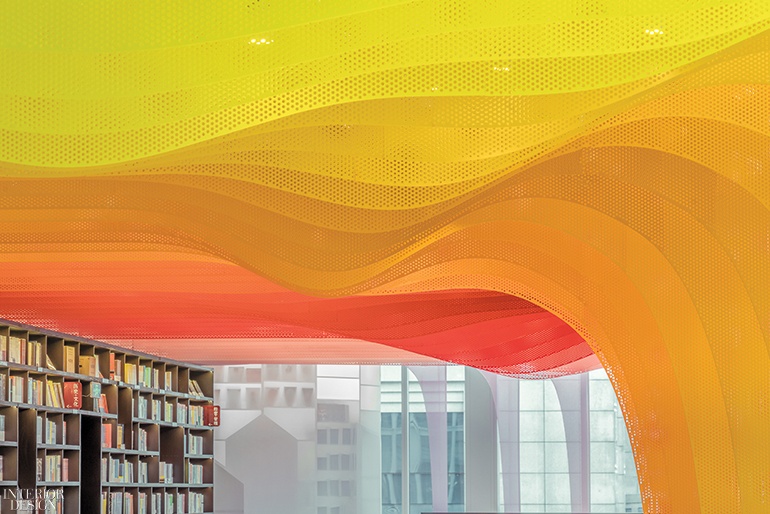 Rainbows, crystals, fireflies, those exhibitionists of the natural world, are exuberantly reimagined in a contemporary mode at China’s latest Zhongshuge bookstore, in Suzhou, a city 65 miles inland from Shanghai. The Zhongshuge chain has been making a name for itself, based on a steadily expanding collection of design-led emporiums often featured on lists of the world’s most beautiful bookstores and posted on Chinese millennials’ WeChat accounts. Suzhou is the eighth location as well as the second by Wutopia Lab, which previously designed a shop on Shanghai’s outskirts, in the British-themed village of Thames Town.

Though dwarfed by Shanghai, Suzhou has for centuries been an important center for trade and commerce and today anchors a metropolitan area of approximately 10 million. Most people continue to associate it with meticulously designed gardens and canals, despite the fact that the central business district has not escaped China’s rush to construction. A shiny office tower there houses Zhongshuge, occupying 15,000 square feet on the third story.

Several dichotomies come into play at Suzhou’s Zhongshuge. First, this is a bricks-and-mortar store, so to speak, for old-fashioned printed books. . . in China, one of the most Internet-obsessed, technologically driven countries in the world. Second, the aforementioned rainbows, crystals, and fireflies, all elements of the natural environment, are represented by obviously man-made materials.

The interplay between nature and artifice is central to the vision of Wutopia principal Yu Ting, who believes it’s impossible to untangle one from the other: “In my opinion, there is no significant difference between the two. It just depends on how much humans change their environment. For me, once people interact with or even just observe the natural world, then to some extent they transform it.”

Though he has chosen some spectacular variants of natural elements to replicate at Zhongshuge, he represents them in the stripped-down way he’s becoming known for. “We pushed that aesthetic to the extreme by choosing highly artificial materials as a contrast to what they symbolize,” he explains.

From the street below, the bookstore first appears through the window walls as a glimpse of soft rainbow colors. On closer inspection, the rainbow reveals itself to be a free-form canopy constructed from layers of perforated aluminum powder-coated in gradated colors. (The fire code prohibited the use of acrylic, his first choice of material.)

This canopy is the main feature of the area devoted to books on art and design, the largest of the four themed sections. He named it the Xanadu of Rainbows, “Xanadu” being a reference to the Yuan dynasty emperor Kublai Khan’s capital. The city made famous in the West after Marco Polo visited, it was renowned as a paradise of serenity, an escape from turbulent periods of uprisings and conquests. The wide-open layout of the Xanadu of Rainbows allows for calming personal space—to spare. Yu provided plenty of spots in which to read, contemplate, or decide on potential purchases.

Zhongshuge makes book recommendations, and he devoted a room to them, the very first section that customers enter when they arrive upstairs. It happens to be his favorite, and he named it the Sanctuary of Crystal after the clear, colorless shelving—actually acrylic, permitted for this purpose. The transparency emphasizes the recommended titles as the protagonists, the dominant features of the white-walled space. “For traditional bookstores, designers tend to place too much stress on the shelving,” he says. “What we should pay more attention to is the book itself. So we tried our best to develop the purest display.”

Past the Sanctuary of Crystal is the Cave of Fireflies, a dark corridor where fiber-optic cables suspended from the ceiling represent the firefly’s bioluminescence while illuminating the covers of bestsellers. “Many people think it won’t be light enough to see, but it’s carefully calibrated for reading or for finding your way,” he explains. “It’s a combination of beauty and practicality.”

The storytelling enchantment of the various sections, for both young and old, doesn’t come at the expense of functionality. By encouraging customers to spend time sitting on the stepped platforms and other perches that appear throughout, each area effectively promotes the products on sale there. Increasing “dwell time,” as they say in retail circles, is a well-known Western strategy that’s now pervasive in China.