Messana O'Rorke Updates an Apartment in a Former NYC Synagogue 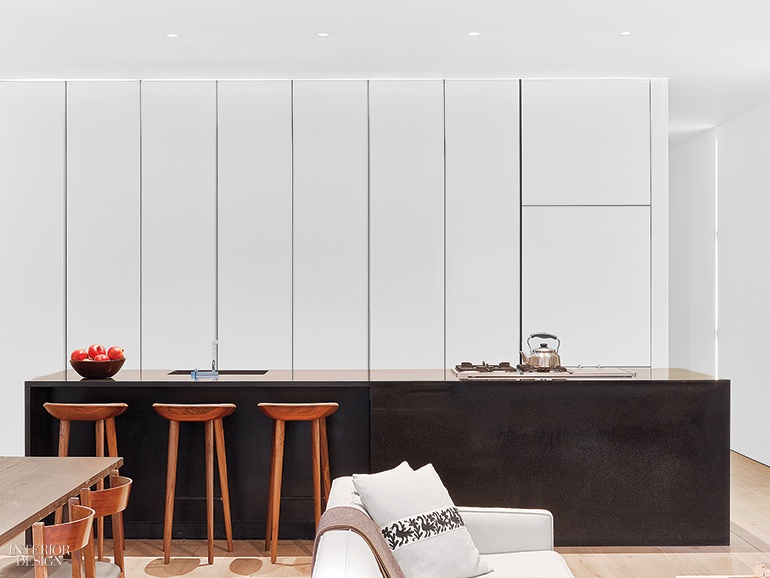 After a decade of living in the garden-level apartment of a converted East Village synagogue, the time had come for an upgrade. Brian Messana of Messana O’Rorke remembers the problems: “The original layout had two small bedrooms, and one of them was separated from the kitchen by a wall set at an awkward 45-degree angle. Also, the only bathroom was entered from the living area.” But Messana and Toby O’Rorke could spot the potential, having previously renovated another unit in the same 1908 landmark.

The garden apartment’s owners love to entertain. So they asked for an inviting public space with an efficient kitchen, plus a master suite with a spalike bathroom. Messana O’Rorke responded by dividing the 1,100 square feet in half, placing the single bedroom near the front door and the living and dining areas at the garden end. Running along a sidewall to connect everything is a narrow corridor. It’s brightened by fluorescent tubes installed vertically at equal intervals—a signature of Messana O’Rorke’s rigorous urban approach.

Keeping the materials palette tight, Messana O’Rorke laid wide oak floor planks and painted the walls a pure white. Likewise white is the kitchen’s hide-everything run of cabinetry. (The “everything” even includes an office niche.) Absolute-black granite wraps the massive kitchen island, then reappears for the master bathroom’s tub, trough sink, and floor slabs. There’s no enclosure for the rain showerhead, installed in the ceiling, so the walls are finished with waterproof plaster.

“Paring our lives down to the things we really value, eliminating physical and emotional clutter, is the idea behind our work,” O’Rorke says. But he and Messana also celebrate and respect the things that are important to clients. Note the garden apartment’s kitchen, expressly designed to improve flow for one of the couple’s favorite activities, cooking Indian food.