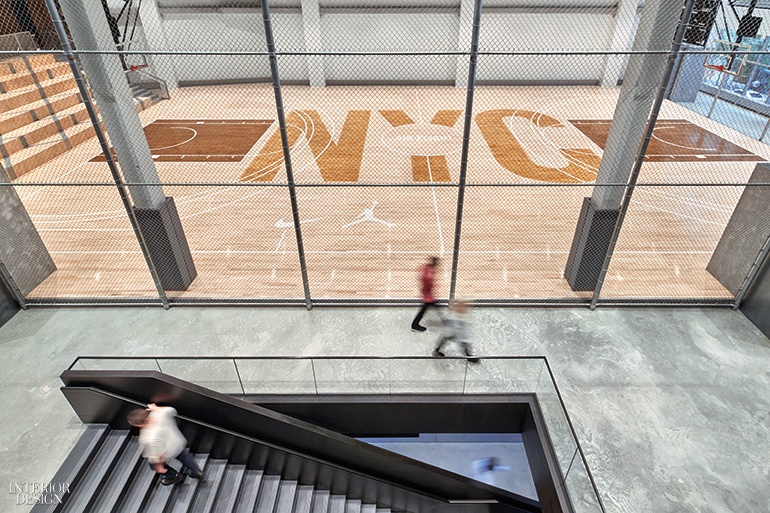 Head tilted back, Frank Gesualdi is standing in Nike’s Midtown office, admiring a “diaphanous surface,” as he calls it, that stretches up toward the double-height ceiling. The Studios Architecture associate principal is talking about chain link fencing, mind you—a surprising divider to find on the premises of a Fortune 100 company. But few things are more city-gritty than chain link, and the Oregon athletic-wear company is intent on burnishing its street cred, which he and principal David Burns were amped to do in collaboration with Nike’s workplace design team.

Even more eye-popping is what’s on the other side of the chain link: a 50-by-84-foot basketball court, also very inner-city, though this one’s not the playground variety for pickup games. Nike plans to use the court to host local leagues and high-school teams, and employees can always drop in to shoot hoops. It’s also a multipurpose space, suitable for all-hands staff meetings and quarterly sales events, thanks to bleachers that can seat 115 spectators in addition to 300 below. Not least, it’s a “wow” moment intended to make an impression on fashion buyers, who come to look over next season’s merchandise, and the celebrity influencers who might visit and then talk it up, generating buzz and helping to shape the way the brand is perceived around the world.

Despite having had a presence in New York since the 1980’s, it’s here that Nike has truly arrived. Helen Kim, vice president and general manager for New York and the East, calls the office “the pinnacle expression of the brand in a global city.”

Conveniently down the street from the sports events at Madison Square Garden, the office is at the base of a brand-new tower with apartments above, and the space had never been occupied when Nike came calling. The square footage was certainly impressive, 150,000 over six stories. And it was raw. Prospective tenants, in the market for more conventional digs, had walked in and then directly out, not knowing what to make of the 32-foot slab heights and the concrete floors.

For Nike, the wide-open expanses offered the promise of a “freestyle” work environment. For Studios, the unfinished features were appealingly reflective of the character of New York. Burns and Gesualdi preserved much of the rawness, leaving the exposed structural columns and even, in some instances, the builder notations on those columns. To ensure that subcontractors understood the approach, Burns says, “We spent an abnormal amount of time with them.” He explained, for instance, that the open ceiling was part of the architecture and that everything up there would be visible. So the subs took special care fitting the ductwork and snaked the electrical conduits particularly artfully.

The aesthetic strikes a balance between rough-and-tumble and refined. In the lobby, the security desk is construction-grade plywood, a material that has perhaps never looked quite so good as it does here. In fact, Burns and Gesualdi rejected sample after sample before finding one with the figuration they were after. Then they detailed it by adding blackened-steel trim with a slender reveal, as if this were a rare wood. “Usually, the issue would be how to convince a client to use this type of material,” Gesualdi notes. The Nike team—designers themselves, accustomed to thinking outside the box—was onboard from the outset.

Starting with the initial pitch, Burns and Gesualdi were thinking about how athletes getting ready in a stadium’s locker room trot through a dark tunnel to reach the open field. That concept is expressed in the darkness of the staircase up from the lobby. Taking up half its width, the stair is 8 feet wide, mostly in blackened steel. There’s an elevator behind the stairs, available for those who prefer it or need it. But because the stair is front-and-center, that’s what staffers tend to choose.

Levels above are flexible spaces, with no private offices and furthermore no assigned seats. The 180 employees— on design, branding, communications, and leadership teams—stash their belongings in lockers tucked into the utility core. Staffers can flop down with laptops in booths, lounges, and conference rooms or else can repair to the library, where books are slotted into diagonal cubbies. A parked Volkswagen minibus—a nod to Nike’s beginnings selling sneakers from the back of a van at track meets in the Northwest—is an option for one-on-one meetings. Showrooms are identified by 12-foot-tall numerals like the ones that indicate seating sections in stadiums. And the top level, still in the works, will have a VIP lounge and fitness center where, say, supermodel Bella Hadid, a Nike spokesperson, could work out when she’s in town.