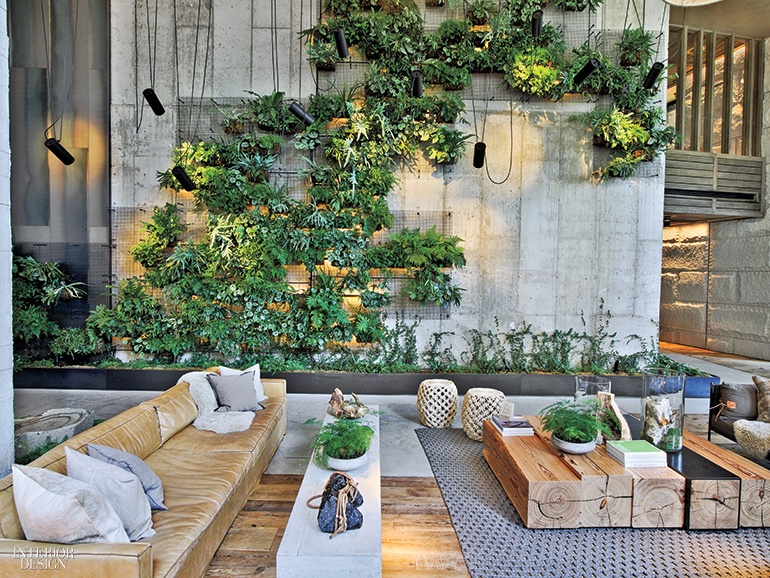 Think globally. Design locally. This twist on the well-known activist rallying cry is a fitting mantra for the latest property in the eco-forward, nature-centric 1 Hotel brand launched by Interior Design Hall of Fame member Barry Sternlicht, formerly mastermind of the W hotel phenomenon and currently CEO of Starwood Capital Group. Tapped by Sternlicht, who has chosen a different firm for each location, INC Architecture & Design created the artfully sustainable interiors of 1 Hotel Brooklyn Bridge Park, which opened on Earth Day. The job entailed tackling such questions as: “What is sustainable luxury?” Not to mention: “How do you evoke a Brooklyn aesthetic without that most overused of Brooklyn design tropes, the Edison bulb?”

First, the setting. Occupying a section of Brooklyn Bridge Park known as
Pier One, once a cargo wharf, a long, meandering building by Marvel Architects houses both the 194-key hotel and a 106-unit apartment wing. The project caused a stir a dozen years ago when plans revealed that the 10-story structure would partially block Brooklyn Bridge views from part of the Brooklyn Heights Promenade. On the plus side, developing the property generated essential operating revenue for the park, one of the most expansive green spaces built
in the city in decades.

Michael Van Valkenburgh Associates’s wild, willowy park landscapes, 85 acres punctuated by hillocks of salvaged granite blocks and benches crafted from timbers rescued from the pier’s dismantled warehouses, was a perfect jumping-off point for 1 Hotel—Sternlicht stipulates that there always has to be a natural landscape feature nearby. “We are a brand about the power of nature,” Starwood Capital Group senior vice president of design Kemper Hyers says.

Sternlicht’s concept of hotels that capture the beauty of nature, while safeguarding the environment, already included such basic elements as hemp-blend mattresses, organic cotton sheets, and key cards made of recycled wood as well as earth-friendly cleaning products, all previously implemented at properties just off Central Park, in Midtown, and in Miami Beach. The brand’s overarching design guidelines offered additional direction. Wood and stone, often reclaimed, feature prominently. So do live eco moments, aka green walls and potted plants.

For additional inspiration, INC looked to the site’s previous incarnation. “Context is everything,” partner and managing and creative director Adam Rolston says. “Here, we tried to relate to the history of the wharf that used
to exist and the natural landscape that has been reconstituted in the park.”
A rusticated wall in the lobby is granite from the original quarry that supplied stone for the Brooklyn Bridge.

Wooden boards, reclaimed from local water towers, clad certain walls and ceilings and make taking the elevator reminiscent of riding inside a shipping crate. Rugs based on the mottled patterns of rusty ship hulls and slipcovers that recall ribbed packing blankets are other riffs on industrial luxury. Partner and studio director Gabriel Benroth notes, “The spaces are layered, which imparts a sense of history, as if the hotel were aggregated and modified over time.”

Speaking of modification, Hurricane Sandy hit early in the hotel’s construction, stopping progress and requiring that the ground level be raised 36 inches. “Quite literally, this became a story for the hotel,” Hyers continues. “The employee café is named 36, and murals in the suites have a symbolic 36-inch datum line. The realities of global warming live here.”

Rolston, Benroth, and partner and field director Drew Stuart did a deep dive into the “Brooklyn style” of popular imagination—everything reclaimed, repurposed, DIY—to chart a new sensibility that’s still true to the borough’s creative ethos. Call it Brooklyn 2.0. “What we retained was the honest interpretation of materiality and forms that express how things are put together,” Rolston explains, adding that INC engaged with the local maker community to “authentically tie the project to place. People expect that they will connect to the culture of a particular city through their hotel experience. It’s just a given now.”

INC collaborated with a number of design firms and artisan workshops based in four of New York’s five boroughs. “Design doesn’t stop at our studio door,” Stewart says. From Brooklyn, for example, Uhuru Design turned beams from Domino Sugar into cocktail tables for the lobby, while Bien Hecho made tops for dining tables out of wood from New York Botanical Garden trees that fell during Hurricane Sandy. Fernando Mastrangelo Studio, representing Queens, used a strangely caviar-like silica to form a table that greets patrons on their way to the hard-to-get-into rooftop bar.

The work of local artists also figures into the picture. Most notable is a sculpture comprising 6,000 pounds of obsidian rocks tucked into the bend of the lobby’s staircase, its blackened-steel wire calling to mind the suspension cables of the Brooklyn Bridge. Almost entirely missing throughout the hotel, on the other hand, are those Edison bulbs. You’ll find them in only a handful of sconces in the lobby.