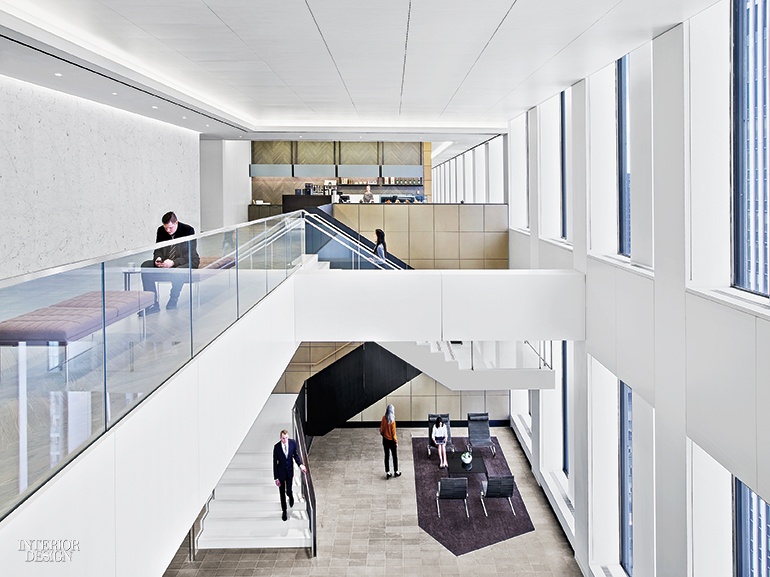 If New York lawyers have immortal souls, underneath it all, then law offices should have some
soul as well. That’s the reasoning behind White & Case’s surprisingly uncorporate headquarters. This collaboration between HOK and HYL Architecture sprawls across the top nine levels of a tower in Midtown’s Rockefeller Center, and every inch is superlatively composed and calming. Each detail subtly underscores a commitment to well-being.

You see it on the hushed practice levels, with their expanses of
adjustable-height desks and wide corridors with floorboards in maple chosen for the poetry of the grain—one of many earthy elements deployed for a crafted quality. “It’s a feeling of being made, not manufactured,” HOK senior principal Tom Polucci says. You see the same approach in the cafeteria floor’s squares of end-grain oak, each chunk showcasing the entire whorl of the oldest rings at the heart of a tree, like a mandala inked by Mother Nature. And in the fitness center, which has a full-time trainer, freshly laundered workout clothes, and an Empire State Building view. And even in the restrooms’ blond European oak enclosures and gorgeously figured marble counters.

But that’s certainly not what the design team saw at the outset of the project. The 1960’s tower was superficially modern, but the 440,000 square feet in question had been outfitted in a rather old-fashioned way by the previous occupant, the McGraw-Hill Companies. With the signing of the lease, White & Case lawyers inherited corner offices, working fireplaces, and dark-stained wood moldings.

White & Case had, in fact, spent decades in a similarly stuffy office, just a few tourist-clogged blocks down, making the proposed transformation that much more difficult to visualize for members of the building committee. So it was a big help that competitor law firms graciously opened their doors for compare-and-contrast tours. “We benchmarked the design to other firms,” HOK principal Christine Vandover notes.

In the meantime, Polucci and Catherine Heath—who was an HOK senior principal at the start of the project and continued after going out on her own as HYL—interviewed hundreds of White & Case partners and employees. Heath calls herself a “lawyer whisperer,” thanks to her extensive legal-design experience. (Her Washington headquarters for Arnold & Porter appeared in the National Building Museum’s recent “Built by Women” exhibition.) When you can work nearly anywhere with a data connection these days, she points out, “Who wants to come all the way in to the office unless there’s a real reason to?” What White & Case craved, she discovered, was neither white-shoe formality nor a laid-back start-up vibe but something in the middle, a quiet kind of buzz.

Reconfiguring mechanicals would push the ceilings up a few crucial inches. But how to bring the extra daylight and views to everyone?
The answer was partitions in crystal-clear low-iron glass, a contrast with the regular glass and frosted film used liberally at many law offices. Even the safety graphics here are as minimalist as possible. Furthermore, these largely transparent partitions have frames in polished aluminum. That “little bit of sparkle,” Heath says, bounces daylight into the building core.

The main reception area’s double-height atrium bursts exuberantly upward, through the slab, while
LED strips flush with the curtain wall reinforce the lantern-in-the-sky effect. Enormous crescent sofas curve toward each other in the impressive volume, softened by a blue-gray rug. From here, a ceremonial staircase ascends to the amenities that crown the tower’s 50 stories. First comes the coffee bar. The neighboring cafeteria, practically a self-service restaurant, boasts a colorfully abstract mosaic mural in tile custom-developed by HOK’s product design studio. It also contributed the acoustical ceiling baffles in the library, which shares one end of the floor plate with the fitness center. Besides consulting reference books or working out, the other reason to venture this direction is the IT drop-in station, a sexy bar with plug-in points. Planning for longevity, given the 20-year lease, meant an envelope that’s essentially neutral though undeniably luxe. Corridor ceilings are oak stained to match the anigre furniture systems. Down a long hallway through the lavish conference center, one wall is clad in gray-veined white Italian marble milled into subtle undulations, and the other is paneled in perforated leather—both kissed from above by cove lighting.

Of the conference center’s pre-function spaces, the most elaborate one centers on a quartz-composite
island that offers both induction heating and cooling, a detail borrowed from luxury hotels and restaurants. Angling out from a nearby wall at counter height, a museum-style White & Case time
line displays backlit images and bite-size texts to be explored, perhaps, during cocktail hour. In a similar manner, lacquered cabinetry contains such historical mementos as minutes from a 1914 meeting and a 1950’s brass pen-holder engraved with the signatures of the partners then. Call that the soul of the machine.