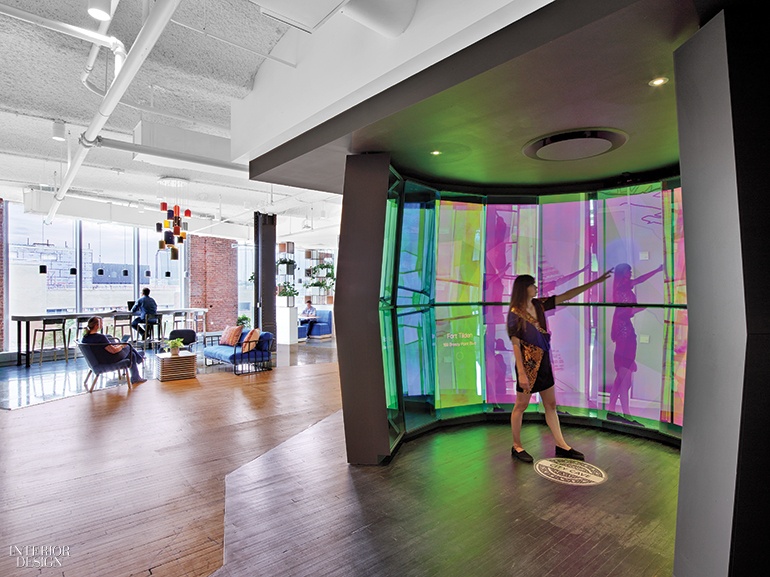 In view of the High Line park and the Hudson River, an easy arm’s length from the foodie mecca of Chelsea Market, and a stone’s throw from the meatpacking district’s mayhem, Google has a new home. With space split between two Chelsea landmarks, National Biscuit Company buildings from 1898 and 1913, and revamped by Interior Architects, the search engine’s sales team enjoys impressive digs that are nevertheless decidedly understated. The goal here was to play against type by celebrating the low-tech and the local.

Google’s presence here started with a single office above Chelsea Market. Scoot across an original footbridge to find three additional levels with office areas, meeting zones of various sizes, a fitness studio, and a 200-seat cafeteria. That’s 145,000 square feet in all.

Through the entire premises, the corporate branding is low-key, almost invisible. IA’s effervescent managing director and principal, Julio Braga, and senior associate John Azinaro focused on conversation pieces, making sure there’s plenty to see or smell or touch at every turn. A wall in the main reception area is covered with 63,000 clacking disks, black on one side and white on the other, that flip to display different graphics or, eerily, silhouettes of visitors. Gracing a pantry, rows of fancy teacups and saucers are attached to the wall above a niche stocked with canisters holding 20 varieties of tea leaves. (Water can be heated to the drinker’s preferred temperature.) A gilded LED fixture flows, like molten lava, across an otherwise unadorned corridor wall. And the footbridge’s ceiling hosts a kinetic sculpture of tumbling black, white, or metallic prisms. IA partnered with Google’s longtime graphics-and-branding consultant for the naming and embellishing of various spots, notably the meeting zones’ glass partitions bearing stunning appliqué geometries. A lounge’s trellises and planters evoke a beachside boardwalk. Plaster finishes in an elevator lobby mimic the strata of sedimentary rock. The cafeteria’s kitchen is inspired by underground mining operations, a reference to data mining.

Google’s creative group, called the Zoo, integrated the latest technology with a kid’s wide-eyed wonder for colorful interactive displays based on cutting-edge Web search. The highest-of-high-tech might be City Cave, a mysterious alcove where users gesture toward emotion-related search terms appearing on surrounding screens. Then the software conjures imagery of a place in New York that’s somehow related. It’s a wondrous oddity that undoubtedly leads guests from, say, advertising agencies, into useful discussions of search algorithms.

Features with presence-sensing imagery are designed to astound first-time visitors. Suspended overhead in the pre-function area is a tilted strip of screens that translate visitor’s speech and movement into colorful, pulsing waves. As people walk along a corridor, a wall’s striated acrylic fins glow various colors. These elements look and sound otherworldly, but they’re by no means acts of whimsy. “Each plays a part in a carefully orchestrated sequence of arrival and immersion, both for Google’s sales execs and for their customers,” Azinaro says.

There’s no guesswork when it comes to office functionality either. Former IA director of workplace strategies Shih Hua Liong, now a New York real-estate and workplace-services site lead at Google, explains that her group “tests” new solutions, conducts assessments, and collaborates with Google real-estate project executive Adam Lutz. “Not everything needs to be high-tech,” Liong offers. Braga concurs, “They’re proving how tactile materials and perceptual effects can not only be more effective but also provide a more authentic atmosphere.” Liong surveys her surroundings to point out solutions that are simple and analog, eventually settling on this example: Phone rooms have been evaluated for size, proportion, and vacancy indicators. She believes that visual cues—glowing color bars, readable from a block away—can be as effective as digital tools to indicate that a phone booth is available. These Google analytics, as it were, are shared to inform future workplace iterations.