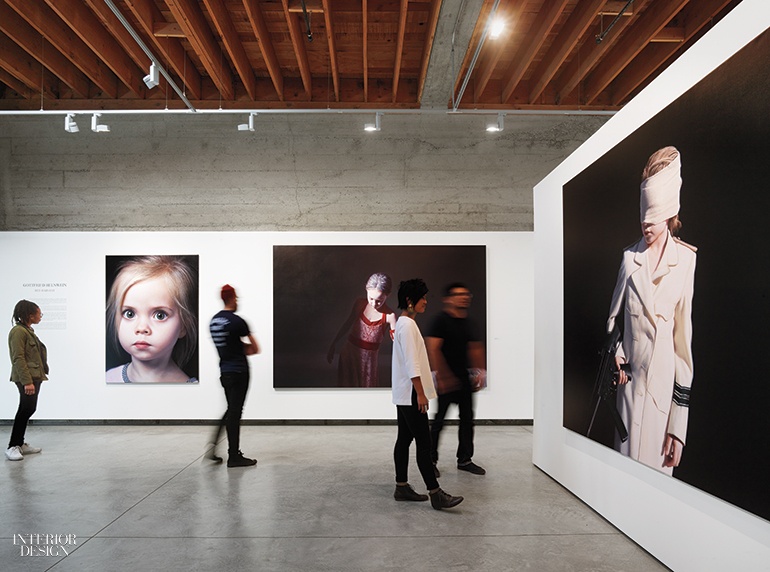 With a dad who’s a sculptor, a mom who’s a painter, printmaker, and collage artist, and an older sister who’s a painter, sculptor, and ceramist, Joshua Aidlin is certainly at home around art. In fact, he also sculpts in downtime from his duties at Aidlin Darling Design. So it’s surprising that he and David Darling had never completed a gallery, technically speaking—if we don’t count their gallery-esque restaurant In Situ, part of the expanded San Francisco Museum of Modern Art. Their first actual gallery is a game-changer, a new location for San Francisco’s long-established Modernism. Aidlin calls it “a passion project.”

Modernism’s president-owner is Martin Muller, a Swiss art dealer who just happens to be the stepbrother of Diane von Furstenberg and who moved to San Francisco in 1978. Ever intrepid, he went into business the next year, quickly making a name for himself as a provocateur—being the first on the West Coast to exhibit works by the Russian avant-garde and the first in the Bay Area to show Andy Warhol. Among the artists that Muller now shows are Ed Ruscha, Robert Crumb, and Hiroshi Sugimoto. A recent exhibition presented the immense, ghostly portraits of Gottfried Helnwein, an Austrian painter haunted by Nazism and the Holocaust.

Likewise a pioneer when it comes to real estate, Muller had been an early denizen of the South of Market neighborhood, back when it was gritty. Then the tech biggies arrived. One of them, Uber, ultimately took over most of the mid-rise building where Modernism had occupied a white-box space. “The SoMa arts community as a whole has really been decimated,” Aidlin says.

Modernism’s need to relocate led Muller to the Tenderloin, one of the city’s last remaining ungentrified areas. (Though probably not for long. It’s already in the initial throes of reinvention as an art nucleus.) And he got lucky. Next to a dicey SRO, he found a hidden gem. Once you got past the dubious pink-tile facade, which Aidlin describes as “desperate-looking,” there was a modest building that had started out in 1947 as home to an outpost of the safe and lock manufacturer Diebold, Incorporated. Inside, board- formed concrete walls, Douglas fir ceiling joists, four skylights, and a rear mezzanine defined the 4,000 square feet. “The building owner fell in love with what Martin was doing and with his history,” Aidlin continues. So much so that he took on the role of general contractor for the renovation.

Aidlin, for his part, says he made it a priority “not to obscure the soul of the place” while making judicious upgrades. He sandblasted the walls’ board-formed concrete to lighten it up. The badly cracked poured-concrete floors were replaced with a pristine counterpart on the ground level and oak planks on the mezzanine. Aesthetics aside, functional aspects would require additional changes. A gallery needs places to hang and stash art, no doubt about it. He came up with a solution providing the display flexibility and storage capacity that Modernism had previously lacked.

Broadly speaking, organization for the long, skinny building breaks down into front and rear zones. The double-height front is where the main gallery is. Meanwhile, the rear is two levels. Tucked below the mezzanine, alongside the staircase, is a smaller gallery. Above, offices for Muller and the gallery’s director, a meeting area for conversations with collectors, and a library form a row.

First up: the main gallery. It features a hefty Donald Judd–esque reception desk in blackened steel and the same Douglas fir as the ceiling. One end of the desk integrates a bookcase displaying catalogs. For art display, Aidlin installed white-painted plasterboard surfaces, in varying heights, over the board-formed concrete. The swath of white behind the desk rises almost to the ceiling. On the opposite wall, the white stops several feet lower, allowing the gray behind to show. The flexibility factor? In the middle of the floor, a pair of partitions are mounted on casters to swing 360 degrees for different configurations.

The smaller gallery, Aidlin notes, is “more humble.” Yet it’s equally clever. Paintings hang on “walls” that turn out to be doors. They slide back to reveal storage racks for additional paintings as well as drawings.

Ascend the staircase in textured steel to encounter book storage galore on Dieter Rams’s streamlined shelving. That’s in the library and the meeting area, which share the center of the mezzanine. Toward the front sits the director’s office, its slot window overlooking the main gallery. Farthest back is Muller’s office. All are furnished with prime examples of classic modernism, of course, from Ludwig Mies van der Rohe’s Brno chair to Gerrit Rietveld’s Zig Zag.

It was El Lissitzky, one of the first
artists to be shown at Modernism,
whose lithographs inspired the bright red of the door that gives the gallery its new street-front identity. The facade’s other main element is an extra-wide window. “It’s a way to connect the art world to the community,” Aidlin adds. Just inside the glass, a Douglas fir window seat strengthens the connection. Let’s not take things too far, however. This is still the Tenderloin. A security gate, concealed in an exterior header, descends at night.