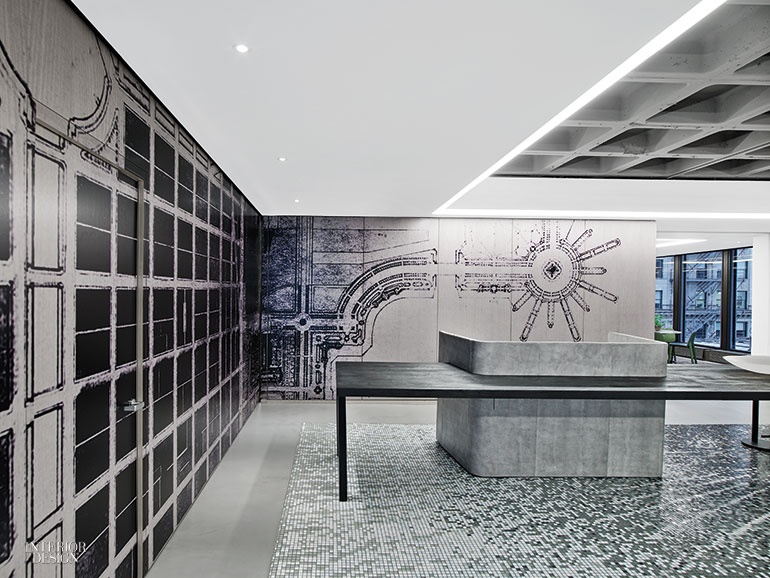 A truly global network, the International Interior Design Association has 15,000 members representing 58 countries. But its nerve center has long been linked with a Chicago landmark, the Mart. As explained by executive vice president and CEO Cheryl Durst, an Interior Design Hall of Fame member, “We’ve had presence there since the 1960’s.” That’s decades’ worth of inertia, discouraging the IIDA from leaving the Windy City’s foremost design hive. Still, with the most recent lease about to expire, the association deliberated whether to move its headquarters to another space in the ginormous building or to venture outside it.

Gensler’s Chicago and Washington offices consulted on the relocation. “We considered a number of properties, from the Jeweler’s Building to more corporate addresses,” principal Jim Williamson begins. As a past IIDA president, he knew what to look for. Contenders were scored according to a short list of priorities: access to light and views, proximity to public transportation and hotels, and ability to accommodate growth in addition to lease favorability. On all fronts, the clear winner was 15,300 square feet in a glass tower completed by the Office of Mies van der Rohe in 1970, a year after the death of Ludwig Mies van der Rohe himself. “The logic of taking that space overrode the emotionalism of leaving the Mart,” Williamson declares.

A strong connection to the city was a lure. Full-height windows, on three exposures, afford views of Michigan Avenue shops, Chicago River boat traffic, and a verdant plaza, WiFi-enabled for quick breaks. “It’s a humane second floor, attached to the streetscape yet enough removed,” Durst notes. “This same footprint was available higher up, but it felt too detached.”

Internalizing the urban plan, a 15-foot-wide corridor hugs the longest window wall, a sort of daylight-flooded boulevard connecting the office area at one end to the training room at the other. This expanse is dotted with comfy-casual sitting areas. Manufacturers such as Herman Miller, OFS Brands, and Maya Romanoff donated some of the furnishings, and the colorful Chinese art deco rugs are on loan. Above, edge-lit cutaways expose the waffle slab, a Mies signature.

The sitting areas are in constant use by the 23 staffers and the steady flow of visiting members and industry notables—a liberating improvement on the former HQ’s separation between public areas and back-of-house. “This represents a real shift in IIDA culture, celebrating and supporting their collaborative nature and forcing the type of serendipitous collisions that undergird innovation,” Gensler principal Todd Heiser says. Durst concurs, “We do a lot of walking here, whereas in the past we were tethered to our desks.” Issuing take-them-with-you laptops to everyone likewise encourages complete mobility, she adds, “embodying a big idea our members are talking about.”

At the boulevard’s midpoint, reception serves not only as an entryway but also as a hub, thanks to a desk modeled on a refectory table and an expansive sectional composed of mustard-yellow or cream modules. Behind it, a vintage George Nelson shelving unit is artfully styled with bric-a-brac. “This project demonstrates the value of personalized accessories,” Heiser says. It’s true. The shelves are garnished with such curios as vintage globes, an Alexander Girard puzzle, an architectural model from the 1933 to ’34 Chicago World’s Fair, and even a decorative egg that once served as a Playboy giveaway. As Durst says with obvious relish, “You’ll notice we’ve got stuff.”

Still more stuff is in evidence in Durst’s own well curated lair: her Hall of Fame award, African art, and, on the vintage Nelson sofa upholstered in blush-colored cotton velvet, “pillow porn,” she jokes. “It minimizes the 'you’re coming to the principal’s office’ effect.” Heiser likens her office to “a storefront that draws people in,” a reference both to the objects displayed and to the central location. “Tucking Cheryl away in a remote corner suite wouldn’t have been appropriate. She is a real ambassador for her organization and the industry, so she needs to be up front.” That means opening right onto the boulevard, adjacent to the boardroom.

In addition to hosting IIDA meetings, of course, the boardroom and other conference facilities can be rented by outside organizations for focus groups or even seated dinners. The four smaller meetings rooms are each named for a design-centric city: Milan, Zurich, Hong Kong, and Bogotá, Colombia. There’s also a training room that holds up to 150 itself, more when glass doors stack away to allow spillover onto the boulevard.

“The term resimercial is often evoked here,” Durst says. Indeed, that portmanteau is embodied by whiteboard-painted walls throughout that are tagged like graffiti with the words swanky, modern, effervescent. . .all qualities in evidence. “I was intent on the office having a point of view,” she continues. “We take design very seriously, but we don’t take ourselves so seriously.”