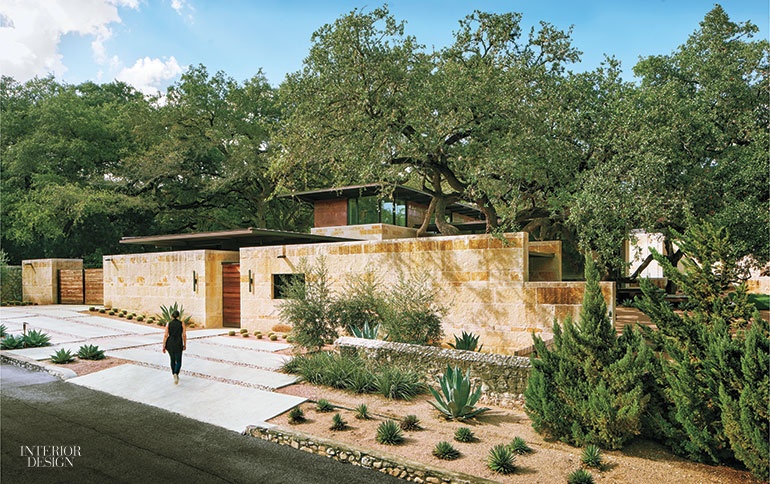 If Texas has a soul, it can surely be found in the work of Interior Design Hall of Fame members David Lake and Ted Flato. They were both born and bred in the Lone Star State, the latter taking a temporary leave of absence in California only to earn his architecture degree from Stanford University. And the Texas vernacular looms large in the residential portfolio of Lake Flato Architects. Courtyards are the core, no matter the setting. Overhangs, of necessity, offer protection from harsh sunlight and brutal heat. Sustainability rules, not just as a programmatic constant but also as a keystone of the studio’s culture. An exemplar of all is a house that Flato completed with associate Laura Kaupp Jensen, a Texan by choice, for a father and his young daughter in Olmos Park, a municipality that’s part of San Antonio.

First and foremost, this is an urban dwelling. It’s on a corner site, with 18-inch-thick exterior walls of local limestone to “edit out the street,” Flato says, adding that, inside the 3/4 acre, “There’s a rural quality that’s all about courtyards and trees.” Make that magnificent oaks, the grandest judged to be three centuries old, not to mention the heavily wooded Olmos Basin Park beyond. “The key to designing a successful house,” he continues, “is to leverage the outdoors.” He and Jensen certainly did that here.

The house is really a compound, its separate structures sited with consideration for adjacencies and the population of trees. In the center stands the house itself, two virtually independent wings perpendicular to each other, joined by a low glassed-in volume. The main wing’s downstairs kitchen and library are partly buried in the side of a hill, so the pair of upstairs bedrooms seem to float above like tree houses. Meanwhile, the living-dining wing is a single-story glass box, a marked contrast to the predominant limestone. Both wings have steel overhangs. Copper, concrete, and plaster also figure into the materials equation. Then, to either side of the living-dining wing, stand the guest pavilion and the exercise studio. The arrangement results in a pair of courtyards.

Inquire about square footage, and Flato responds with two figures. The first number refers to interior space, with air conditioning. That’s 4,600 square feet. Outdoor rooms, those courtyards, add 5,400 square feet, likewise vital. “The house’s first ‘room’ is the larger courtyard,” Jensen says. After parking in the carport, one proceeds along a limestone-paved pathway, past a koi pond and a giant electric-blue ceramic vessel beneath the courtyard’s spreading oak boughs, to reach the actual entry at the glass nexus.

Of the interior spaces, the kitchen features the most striking and complex architectural treatment. Taking cues from the concrete of the retaining wall on the uphill side, Flato and Jensen conceived the ceiling as a succession of narrow concrete barrel vaults cast with formwork made from oil barrels sliced in half and welded together. That was one tricky pour—wiring for lighting had to be perfect the first time around. Kitchen furniture had to be able to stand up to the architecture, and standard George Nakashima seating was deemed too small, so an extra-large chair and bench were commissioned from his studio. They pull up to an island with a Nakashima-esque live-edge top. Meanwhile, to connect the kitchen to the bedrooms, immense slabs of honed limestone were stacked into steps that also support an upper flight of open stairs.

Furniture and art in the living-dining wing are equally pedigreed. Sergio Rodrigues leather-covered armchairs sit by the fireplace. That shaggy white chaise longue? It, too, has Texas roots. It’s by the Austin-born twins behind the design studio the Haas Brothers. Above a Tyler Hays walnut credenza hang Andy Warhol portraits of John Wayne and Geronimo.

Overall, the man-made and the natural merge—Lake Flato’s design ethos knows no boundaries. “Just a few moves open up the house,” Flato notes. “Big sliding glass doors take it from an indoor to an outdoor condition.” No need for that suburban standard, the outdoor kitchen, since the regular kitchen’s sliders allow it to merge with the smaller courtyard, bordered by the exercise studio and the swimming pool. Similarly, the living-dining wing can become practically poolside.

Bedrooms are lofty aeries. The master suite’s covered porch even has an outdoor tub, with a wengé surround, to supplement the shower in the bathroom. But there’s a downside, as Flato notes: “San Antonio does have a lot of mosquitoes and other bugs.” To deter the pests, the porch is screened, of course. He and Jensen then added mahogany louvers for a more polished Lake Flato look.