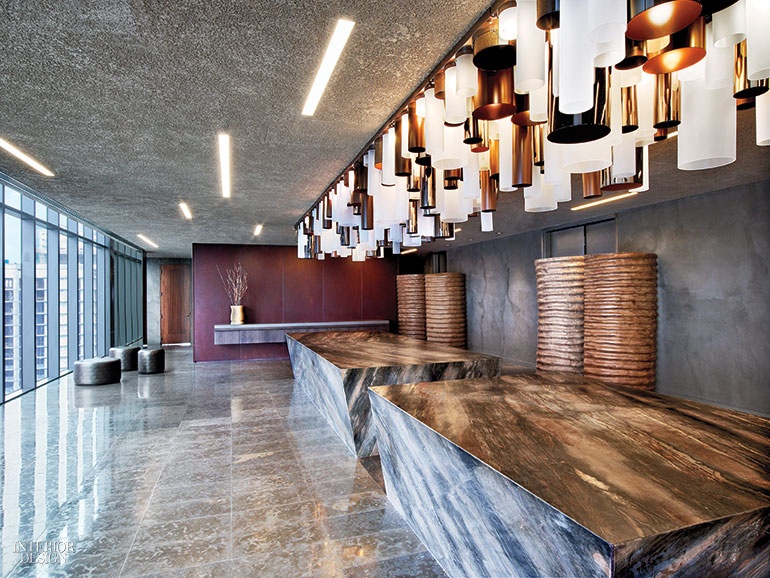 In Miami these days, one of the hottest spots embodies the cool, meditative qualities of fêng shui. The East, Miami, hotel, the work of the single-name Interior Design Hall of Fame member Clodagh, is part of the massive new Arquitectonica International Corporation–designed Brickell City Centre just outside downtown, set amid bridges, freeways, and a good deal of traffic, day or night. But step inside the hotel—which belongs to a hospitality brand launched in Asia by Brickell City Centre’s developer, Swire Properties—and the atmosphere is serene, incorporating the basic elements of water, earth, and, one could argue, fire, at least in the large wood grills of the main restaurant. Overall, the palette is muted. “It gives you a virtual hug,” Clodagh says. Indeed, Clodagh Design International is known for spaces that simultaneously soothe and energize. The fact that the hotel has already become a top choice for travelers as well as a popular local destination is evidence that good energy generates more of the same.

Clodagh’s work typically incorporates the ideas of any number of the healing arts—think acupuncture, aromatherapy, chromatherapy, and Reiki. Starting with valet drop-off and extending everywhere in the 39-story hotel’s public spaces, 263 guest rooms and suites, and 89 apartments, the design is both biophilic and philanthropic. The entry’s chandeliers, for example, were made by Haitian artisans as part of Urban Zen, Donna Karan’s design initiative there. Visitors check in at a desk that’s intended to look as if it’s floating about the ground. Instead of carpet, Clodagh says that she “unrolled a permanent welcome rug,” a collage of limestone, sandstone, and marble set into the floor.

Figuring out how to separate the main part of the lobby from the bar, Clodagh sketched—on the back of a napkin—a partition that resembles a giant wind chime or perhaps upside-down organ pipes. It’s actually an inverted fountain: Water runs through the pipes and drips peacefully into a tranquil pool. “I like to define space without dividing it,” she says. The bar serves coffee by day, then at night transforms into a cocktail lounge, thanks to an ingenious system of panels in teak with glass inserts that slide to cover the espresso machines and reveal liquor bottles. Intriguingly, the simple gesture of moving the panels also changes the color scheme from daytime turquoise to twilight amber.

Cleverness, however, is a secondary concern, design director Nancie Min says: “For Clodagh, it’s not so much about the design for its own sake as creating the experience for the guest.” That translates into small moments as well as showstoppers, and the hotel has plenty of each. On the subtle side, guest rooms feature drawers big enough to stow away a suitcase or two—a Clodagh signature—and the beds are carefully placed to take in views of both city buildings and Biscayne Bay. Every room also offers “a really comfortable sofa, a good reading light, and lots of hooks,” Clodagh says. “You can never have enough hooks.”

Among the showstoppers, the most talked-about are the elevators, which have already been memorialized in at least eight YouTube videos. The high-speed cabs features mirror in which tiny points of light are reflected to infinity. Imagine looking at the milky way through the most powerful possible telescope. “We thought about selfies,” Clodagh admits. Almost as talked-about is the ballroom at the very top of the slant-roofed tower—particularly the spot outside the restrooms where men and women share a row of pedestal sinks and a panorama that stretches across the city. The setup is designed, Clodagh says, “for flirting.” But in keeping with the yin and yang of the East, Miami, the ballroom has hosted not only spectacular weddings but also a successful yoga event.

For all the complexity of thought, Clodagh says that, in the end, the hotel simply “welcomes you.” For that, a large proportion of credit goes to her years of observing human behavior and what animates us. And it doesn’t hurt that Buddhist monks blessed the building, which furthermore has crystals buried in its foundation.