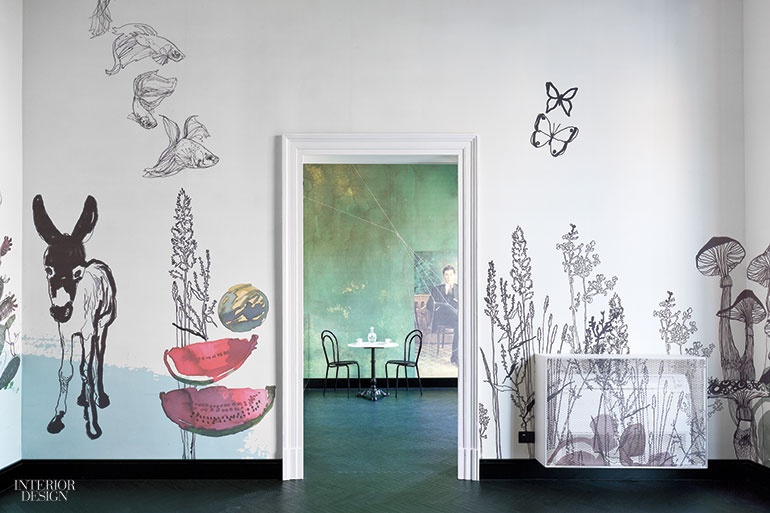 Set at the foot of Mount Etna in Sicily, Catania is steeped in legend, mythology, and religion. A lava-stone elephant, symbol of the city, stands in the Piazza del Duomo—the sacred and the profane, one might say. Surrounding streets of this UNESCO World Heritage site are lined with venerable baroque palazzi built after a major earthquake in 1693. Just steps from the main cathedral, in fact, a noble residence from the 1700’s now contains a vibrant boutique hotel, the Asmundo di Gisira by Studio GUM.

Our story unfolds on the palazzo’s second story. Studio GUM co-founders Valentina Giampiccolo and Giuseppe Minaldi—an architect and a designer who are both personal and professional partners—walked upstairs with client Umberto Gulisano, a dentist turned hospitality entrepreneur, to confront derelict rooms around a narrow courtyard. Some of them had access to a terrace, while others overlooked the streets directly. Giampiccolo and Minaldi determined that six rooms would be guest quarters, all generously proportioned. The rest of the space would be given over to reception, a breakfast room, a lounge, and a kitchen.

Giampiccolo and Minaldi simultaneously respected history and looked to the future. Demolition and construction were minimal, focused on enclosing the courtyard with a skylight, adding en suite bathrooms, and installing herringbone parquet in ebonized oak. Otherwise, the partners concentrated on conserving and restoring decorative moldings, ceilings in stucco or fresco, and other inimitable elements of the past. Giampiccolo calls the result “a luxury hotel but with a difference.”

To help execute their vision, she and Minaldi also brought in a cadre of international artists. This is design today, a tasty minestrone. An essential ingredient is the hotel’s running story line, with each space dedicated to a particular myth or legend about Sicily or Catania. Furniture from the 1930’s through the ’60’s, versus the 18th century, propels the plot forward in time.

“A story that inspired the public areas is the one about Billonia,” Minaldi notes. As legend has it, she was a beautiful flower seller who dispersed goodwill on jaunts throughout town during the 1800’s. We first encounter her likeness in a portrait in the entry, welcoming guests. Next, visible beyond the reception area, are the head and neck of an enormous pink flamingo. No, this isn’t Florida kitsch but a reference to the flamingos that used to inhabit the fountain in the Giardino Bellini, a park honoring operatic composer Vincenzo Bellini, Catania’s native son. The fake bird’s lower half is concealed by an enclosure clad in a patchwork of tinted mirror in various aqueous colors.

Inside the enclosure, a kitchen provides espresso and pastries to the breakfast room, which has been transformed into a fantasy garden by wallpaper commissioned from a Swedish illustrator. Peek through the doorway into the lounge for a glimpse of a mural portraying a seated man in a suit and tie, studying a travel guidebook. “It’s about the memory of a place,” Giampiccolo says.

The legend of Colapesce, a young diver who ultimately died seeking treasures for the 12th-century sovereigns of Sicily, is referenced by another guest room’s wallpaper in coral and turquoise. Next door, the mythical lovers Galatea and Acis find representation in separate beds placed tête-à-tête, divided by a headboard. The largest guest room, capped by a remarkable frescoed ceiling, tells the story of Proserpina, goddess of the harvest. An iron-framed structure, reminiscent of a greenhouse, is built into one wall to create a niche for the bed. In front gather mid-century furniture and Mario Botta stools.

Completing the tour’s abbreviated study in mythology and local lore, the guest room devoted to Uzeta, the fictional knight who defeated the Saracen giants, features a headboard of overlapping leather straps detailed with brass studs. Armorlike? You bet. It shares the spotlight with a white ceramic alligator and a contemporary “giant,” a gargantuan black foam foot sculpture by Gaetano Pesce.