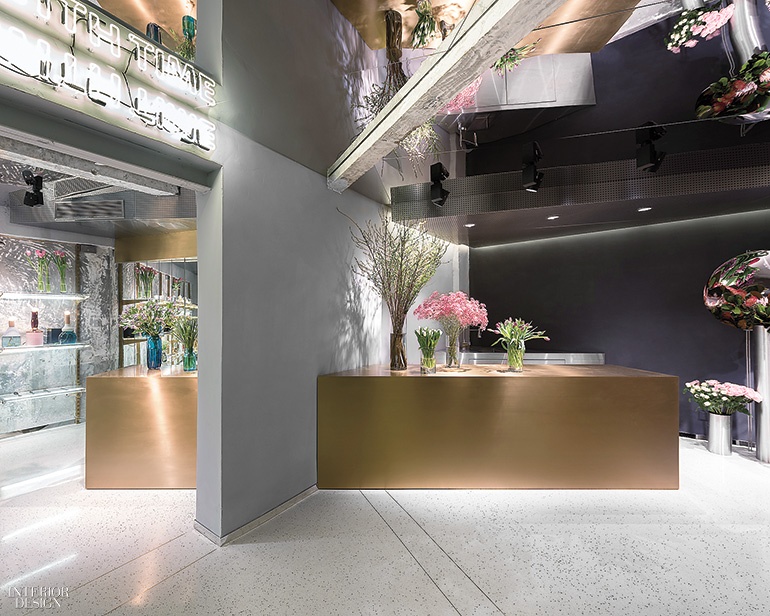 “It’s a very far cry from the usual European florist, with its white-painted wooden planters,” Alberto Caiola says. He moved from Italy to Shanghai “for love” and opened Alberto Caiola Studio there. So he had plenty of East-West insights to offer when the online florist July’s Flower asked him for its first bricks-and-mortar store, to be located in a 1949 converted house in the city’s former French Concession. Intended as a brand experience to stand out in a crowded retail marketplace, his solution was a space that would not only showcase the flowers but also transform them into art.

The focal point of this vision: tall cylindrical vases in stainless steel with convex mirrors built into the back to make a vision of bouquets that burst in unexpected ways. “If you move the vases around, the colors melt, and the shapes shift. It becomes interactive, dynamic,” he says. “To me, this very much relates to Shanghai, which is a crazy, fast environment where everything is always changing.”

In order not to distract attention from the bouquets, a polished minimalism reigns. The cash-wrap desk is plated in titanium with a golden sheen. Shelves are clear, colorless acrylic, lit from beneath.

To make the triangular interior’s 500 square feet feel larger while enhancing the sensation of being surrounded by flowers, almost like lying in a field, mirror surfaces most of the ceiling. Also mirrored, canopies outside angle upward to reflect the flowers displayed in the window, projecting the effect into the street. It’s particularly captivating for pedestrians passing at night.

Caiola compares this visual sensation to pop art: “It’s pop in that it’s understandable. It’s easy, visually engaging. You don’t need a manual to embrace it.” He believes that instant accessibility is the perfect approach when it comes to connecting with the trend-spotting social-media addicts of Shanghai’s younger generation.

The forward-thinking client has fully embraced his concept now that it’s in full flower. In fact, the company slogan is Blossom With Time.