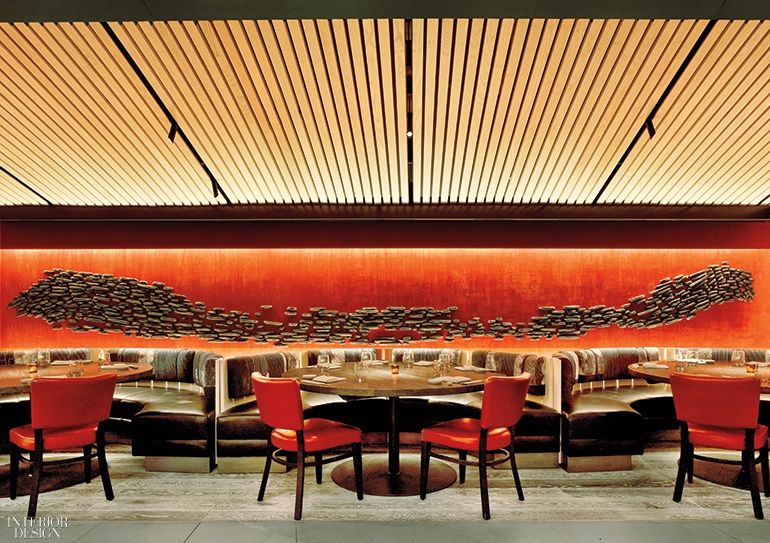 When the first Nobu opened in New York in 1994, the restaurant blazed a pioneering trail—not only because of chef Nobu Matsuhisa’s Japanese-Peruvian fusion cuisine but also because of the space by Interior Design Hall of Fame member David Rockwell. Defined by birch-tree sculptures that read as columns, with smooth stacks of river stones along the walls, it didn’t look like anything that had come before. So when the restaurant eventually had to move, Rockwell—who has won a Tony Award for set design—faced a challenge that he was familiar with from his theatrical work: How do you craft a winning second act?

Rockwell has a special place in his heart for the first Nobu, after designing 21 other branches around the world. That’s partly because the restaurant helped establish Rockwell Group as one of the world’s premier hospitality design firms. Also, living a short walk away, he often popped by after work.

“The original restaurant was of its moment. This one had to be, too,” Rockwell says of the reboot, named Nobu Downtown. “We were exploring, taking creative risks, and following the lead of the food.” Expectations were obviously high. Luckily, he jokes, “I had a quarter century to think about the redesign.”

Also luckily for him and Rockwell Group partner and studio leader Greg Keffer, they were working with a boffo space just a few blocks from the original. The landmarked building had been the American Telephone and Telegraph headquarters, completed in 1922 by William Welles Bosworth, and Nobu Downtown would occupy both the soaring lobby and the former employee cafeteria below ground for a total of 12,500 square feet, four times the size before. While the lobby would serve as a lounge with a bar, the serious eating would happen down the stairs, in the main and private dining rooms.

The lobby, with its 30-foot ceiling and rows of pale marble Doric columns, is included in the landmark designation. “You can’t do anything permanent. It has to be removable, and it can’t be above 8 feet tall,” Keffer says. To a firm familiar with set design, that was a hurdle cleared without even breaking a sweat.

Next order of business: Honor the Nobu traditions. “We pulled from certain pieces of the DNA, like the river rocks,” Keffer notes. They again line some of the walls, including the one behind the lounge’s host stand—where he and Rockwell also hung the original Nobu sign.

Downstairs, abstract trees are employed, too, though this time they are ash, not birch, with a slightly more minimalist silhouette. They appear to support a canopy made of ash slats that hide the ceiling’s acoustical tile. “Deafeningly loud restaurants were never a good idea, so we paid close attention to sound,” Rockwell says. The slats’ Japanese-influenced crisscrossing composition is based on a type of origami called kirigami.

Artisanal traditions are celebrated throughout. “In the end, Nobu is about craft, the hand, and materials as well as great food,” Keffer says. Speaking of the first restaurant, Rockwell adds, “We came early to the commissioning idea.” They upped their game for Nobu Downtown.

Rockwell personally flew to Montreal to work with installation designer Pascale Girardin, who contributed several striking ceramic pieces, among them a black wall sculpture in the main dining room, the midnight-blue wall tiles forming a ribbon around the private dining room, and vessels on the shelves in the sake tasting alcove. During his studio visit, he sat down at the pottery wheel and threw one of the vessels himself. Ask him which one of the dozens is his, and he jokes, “The best one, of course.”

Inspired by a Japanese calligraphy ink brushstroke, a swirling black sculpture conceived by Rockwell and fabricated by furniture designer John Houshmand is sure to be the restaurant’s most Instagrammed feature. It’s suspended over the round bar in the center of the lounge, between the towering columns, then extends to point down the staircase. Beneath the stairs, on the concrete floor, lies an LED screen in the oblong shape of a typical reflecting pool—showing a video of Japanese cherry blossoms.

Not all the gestures are writ so large. Rockwell and Keffer got a lot of mileage out of such subtle elements as the barstools’ upholstery, which combines Japanese patchwork and Peruvian colors, mirroring the cultural melding of the cuisine. In main dining, plush red velvet hangs over the backs of the banquettes, mimicking a draped kimono.

There’s a refinement to it all that refers to what Rockwell calls the Japanese “sense of ritual.” This is a story that will continue to unfold.