EDG and Delawie Craft a Modernist Oasis for Andaz Scottsdale 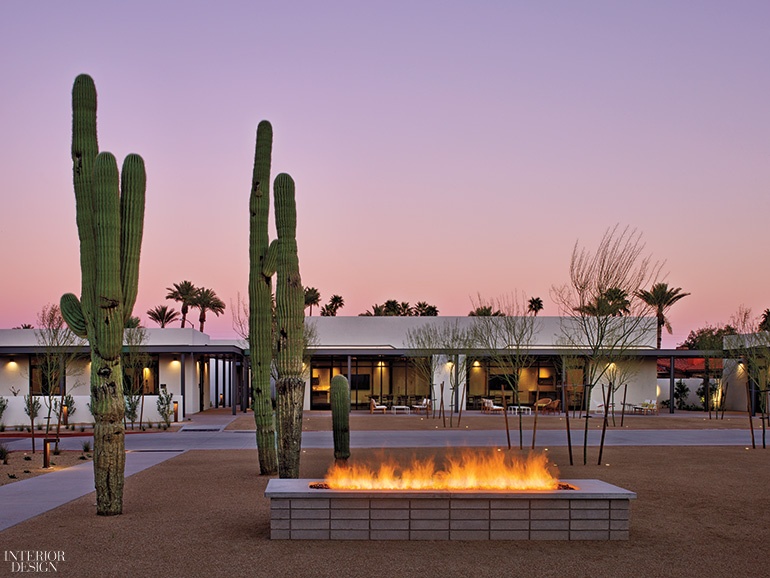 No stranger to hospitality design, EDG is a true expert on matters pertaining to the Hyatt Hotels Corporation, having designed bits and pieces of five properties, with another five projects now on the boards. But the Andaz Scottsdale Resort & Spa, part of Hyatt’s Andaz brand, was different for EDG’s CEO and president, Jennifer Johanson, because, as she describes it, she had the opportunity to “work on everything at once.” That meant both ground-up construction and renovation as well as all the interiors in between, of course, plus branding and graphics, even table settings. For the entirely new buildings and the substantially reinvented guest bungalows, Johanson played a supporting role, while primary responsibility went to Delawie principal Andrew Rodrigues, a newcomer to Hyatt despite two decades of experience in hospitality.

Want the backstory? The Andaz Scottsdale property originated as the Cottonwoods resort, built in 1982 on 25 acres in Arizona’s Paradise Valley, in the shadow of Camelback Mountain. “We kept only the bungalows,” Johanson says. Otherwise, everything is new: the single-story main building with 10,000 square feet for the lobby and the restaurant-bar; four conference venues; a spa; two presidential suites; and two swimming pools.

What you won’t find anywhere are the usual Southwest tropes. There’s not a clay-tiled roof, a stucco wall, or a mauvish pastel in sight. The buildings are long and low-slung, defined by glass and deep overhangs. Sound modernist? That was indeed the idea. And here’s another idea, as Johanson explains: “When researching the desert, we found out about the architects and designers, like Frank Lloyd Wright and Alexander Girard, who moved out there for the light and space. We hit upon the concept of a desert atelier.”

As luck would have it, Johanson and Rodrigues then discovered a real atelier only a mile away. The Cattle Track Arts Compound, founded in 1936 and still going strong, is home to painters, sculptors, printers, jewelers, potters, blacksmiths, and performers. Proof of concept. Accordingly, Johanson and Rodrigues invited the artists and artisans to become a part of the evolving Andaz Scottsdale program. Pieces made at Cattle Track adorn each of the 201 bungalows. Artists-in-residence, a changing roster, are on hand to hobnob with the guests, who are furthermore invited to make studio visits at Cattle Track itself. More figuratively, three conference venues, linked by a steel shade structure, are considered “studios” with names such as Forge and Press.

If the arts are the soul of the property, its heart is the new main building, specifically oriented for mountain views. “That’s the whole thing in Arizona, since it’s mostly so flat,” Rodrigues notes. Step inside to the open-plan lobby-restaurant-bar, unified by large-format porcelain floor tile resembling slate. Backing reception’s banquette, a screen incorporating colorful felt balls has a lighthearted graphic quality reminiscent of Charles and Ray Eames. A nearby wall is brick in a basket-weave pattern, a reference to Arizona’s crafts tradition and, simultaneously, a wink at 1950’s decor. At the rear of the lobby, the boutique has the same name, Textiles & Objects, that Girard used for his own 1960’s shop in New York, and the fabric dolls sold to Andaz guests call to mind Girard’s famous versions. The Andaz doppelgängers, however, are fortuitous finds. An EDG designer discovered them at a California flea market, and the firm commissioned enough to place at least one in every bungalow.

A reference to the Sonoran Desert’s natural tapestry, Weft & Warp Art Bar + Kitchen interweaves multiple wow moments. Watch authentic tortillas and seared meats being prepared on a stone griddle within sight of the glass-enclosed chef’s table, which seats 10. For private dining, there’s an area set apart by a woven screen. The chunky table can accommodate up to 18. Just unhook the extra Eames-style bentwood chairs hung on the wall.

Out in the open, the bar proper is a massive construction. Along the back wall, shelving displays arresting vignettes inspired by artists’ studios. Johanson had observed that many of the Cattle Track artists liked to assemble quirky stuff, and she went for the same effect at the hotel—without, she adds, making the look “too designer-y.” She gave a trio of Cattle Track artists free rein and a budget to hunt and gather. After that, she adds, “We had a show-and-tell party and installed their finds together.”

Beyond the main building, Rodrigues preserved the stunning mature trees that shade the bungalows—but little else about them. He repositioned porches and added steel canopies. Inside, he stripped everything down to the bones and reconfigured the layouts to feature generous bathrooms with ultra-long sink vanities. Next to the beds, Eero Saarinen–esque lounge chairs are upholstered in different colors. Except for the presidential suites, all bungalows are residential in scale and accessorized like a home. Among the books on offer is Todd Oldham’s mammoth Alexander Girard monograph, the perfect bedtime read.