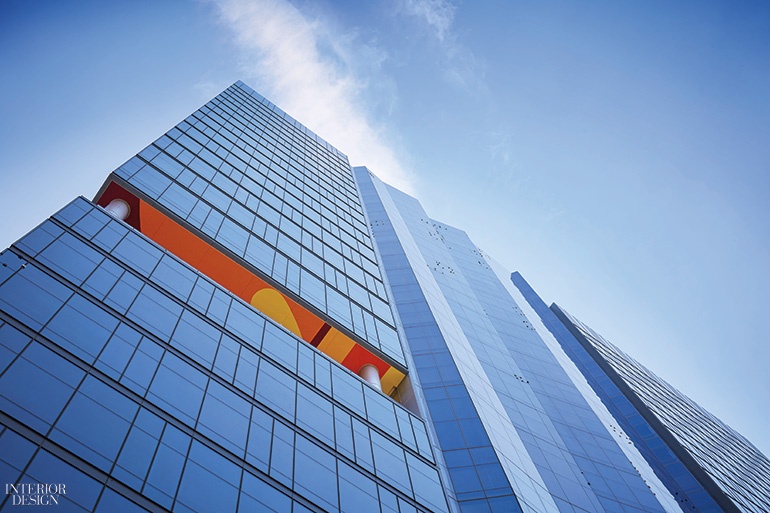 It’s practically impossible to imagine a closer interdependency than that of medical patients, doctors and nurses, and researchers. In terms of physical space, however, the three groups are often in anything but close proximity. Either they’re spread throughout a huge hospital, or they’re at different locations entirely. Not so at the Rehabilitation Institute of Chicago, renamed the Shirley Ryan AbilityLab after a gift from Shirley and Pat Ryan—he’s the one who founded the insurance behemoth Aon. The facility’s ground-up tower truly breaks the mold. For that, kudos go to the trifecta of HDR, Gensler, and Clive Wilkinson Architects as well as to the Shirley Ryan AbilityLab’s visionary president and CEO, Joanne Smith, a physiatrist who holds an MD/MBA.

The concept behind the project is known as translational medicine, which centers on physicians, therapists, and research scientists working with patients in an open setting called an ability lab. (Note the positivity of the word, as opposed to rehab.) No offices, no barriers, no hierarchies—the researchers actually see the patients struggling to get better. “If everyone doesn’t ‘live’ together, the staff won’t develop intimate understandings of the most urgent problems these patients face,” Smith notes, adding that the catalyst for implementing translational medicine came from the patients themselves “wanting to benefit from the latest research.” For example, research that pioneered bionic limbs.

A massive rebranding enterprise in addition to an architecture project, the collaboration began with HDR and Gensler—experts in health-care design and tall-building and workplace design, respectively—winning a competition, then planning the programming for the 27-story, 1.2 million-square-foot structure. A single factor stood out as crucial to the initial fostering of teamwork, according to the project’s creative director, HDR vice president and design director Thomas J. Trenolone: “For the first year and a half, HDR had its own studio set up at Gensler’s Chicago office. Having everyone together, collaborating, increased the speed of the work and the creativity of the outcomes.” Construction was well under way when Interior Design Hall of Fame member Clive Wilkinson, renowned for high-impact visuals, came on board for his very first health-care endeavor.

Gensler design principal Anne Gibson chimes in, “The project was truly designed from the inside out.” There are five ability labs stacked on the building’s north face to take advantage of the natural light and the inspiring Lake Michigan views. Each ability lab is named for its treatment focus: Arms and Hands, Legs and Walking, Strength and Endurance, Think and Speak, Pediatrics. Three are double-height, their staircases vital to the recovery process. “The environment is purposely not spalike. Spaces are designed to get patients up and moving,” she points out.

Easy movement from one space to another, frictionless design, is something that Gibson adapted from her knowledge of the retail sector. At the Shirley Ryan AbilityLab, that translates into avoiding hard corners, wherever possible, and broadening visual perspectives. The corridors are wide enough to double as therapy spaces. The doorways are full-height, 9 feet, for fluid connections between the ability labs and the 242 patient rooms, now all coveted singles unlike in the previous building. Her workplace expertise, “valuing collaboration and collision,” she adds, also came into play. Wilkinson echoes the sentiment: “Interaction forces knowledge-sharing.” From Trenolone: “Patients are able to see progress made by other patients.”

Not only are the treatment settings sui generis but the entire hospital experience is, too. For visitors and ambulatory patients, it starts with elevators that rise past nine parking levels to open in a lobby where a shimmering suspended sculpture reads more gallery than hospital. Beyond, the reception area is welcoming, the opposite of sterile if we’re talking about looks. “There’s no boundary posed by an intimidating desk,” Wilkinson says. Self-service check-in kiosks are pumpkin-colored solid-surfacing, while the same material in icy white forms the sweeping counters where concierge assistance is offered. Meanwhile, arrival for the less fortunate is often by ambulance. “Many people entering are lying on their backs,” Wilkinson notes. “So the ceilings had to communicate.” Ergo the lively pattern, dominated by human silhouettes and abstract shapes in AbilityLab–branded orange, that covers the underside of the overhang sheltering the street entry.

That introduces an extensive graphics program. “It’s important for patient healing to impart optimism,” he continues. Particularly vibrant, understandably, is the pediatrics waiting area, its graphics swirling around portholes looking into the ability lab. A favorite among kids, parents, and staff is the windowed end of a corridor where a bench faces a mural of two huge hands cradling a giant red-and-purple heart.

Each ability lab has its own color scheme, layout, and equipment. In Think and Speak, for patients with brain injuries, a pastel palette minimizes overstimulation, and quilted therapy pods act as soothing cocoons. The pods are part of what Wilkinson calls a “flexible kit of parts,” shared by all the ability labs. Perforated steel forms privacy scrims. Tables have padded, rounded tops and a hydraulic mechanism that raises and lowers them. Mobile carts stash clinicians’ paraphernalia.

All design teams touched on the entire project, but office areas, staff lounges, and patient rooms were more the domain of HDR and Gensler. “Since this is not an acute-care facility, there was more latitude in the patient rooms,” Trenolone says. “Head walls, for instance, are more clean-lined, because the usual medical equipment isn’t required. That allows for a more hospitality-driven feeling.”

Although Smith just presided over the opening of the facility, she is already looking toward the future. A first of its kind for a rehab hospital, a wet lab to enable the study of living human cells already holds promise in the fields of biological, pharmacological, and stem-cell research. “The building is a state-of-the-art tool,” she says. “What we plan to use it for will be game-changing.”