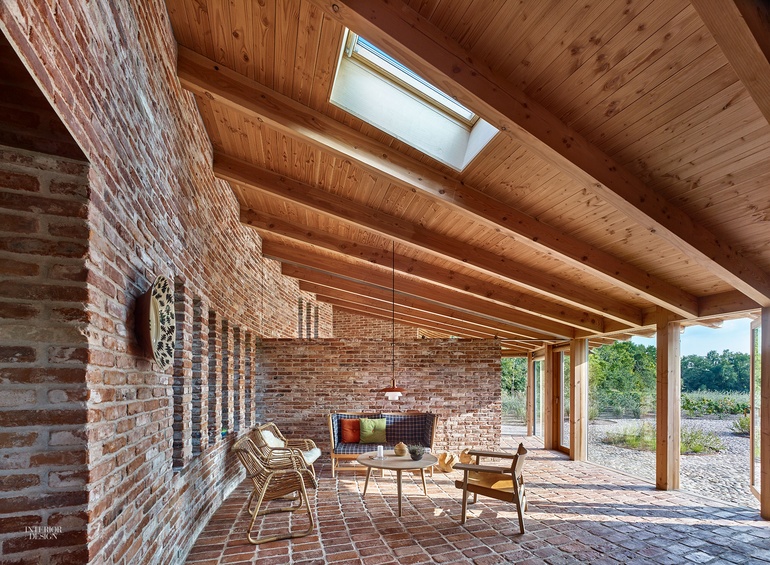 In the Danish shelter magazine that Finn and Janni Holm subscribe to, architect Jan Henrik Jansen was pictured sitting in front of a house that he had constructed with his own hands. “We just rang him and asked him to do one for us,” Janni Holm says. “That’s where our adventure started.”

The Holms had decided to build a new home for their family on a lot in the small city of Odense, and a simple wooden farmhouse was what they had in mind. What they got was entirely different, largely thanks to Jansen’s standard procedure: always conceiving more than one solution for a project. He first showed the Holms a design that corresponded exactly to their farmhouse brief. Then he surprised them with plans for a radically different idea: a round house.

He, in turn, was surprised, even shocked, when they accepted in a split second. “It was amazing,” he remembers. “People usually think about it first.” As a German who came to Denmark in the 1990’s—working for large architecture firms and doing houses as a sideline before branching out on his own as Jan Henrik Jansen Arkitekter—he attributes the couple’s adventurousness partially to the Danish national character: “An interest in design is basic here. It’s not only for an upper-class clientele.”

The reason he made the house curved, he explains, is because it’s flanked on two sides by other houses. So he sited it to face the green meadow behind, making the Holms feel almost as if they are living alone in the open countryside. He used brick, rather than the initially requested wood, to blend in with the rest of the neighborhood. Also, he adds, “The round shape asks for a solid material.”

While the Holms loved the 2,400-square-foot design, they didn’t like its price tag. Finn Holm therefore decided that, although he already had a full-time job as the owner of a corporate cleaning business, he would moonlight as general contractor for the house project. “I’ll never do it again,” he vows. It took two years of his life.

He still has a special love for the handmade brick, which came from a Carlsberg brewery that was being demolished 100 miles away in Copenhagen. The old mortar is still visible in some places. “I touched every one of those bricks,” he says, explaining that he had to hand-cut the entire batch, thousands of pieces. That agonizing process, alone, took six months. He persevered through rain and snow, not to mention complaints from his family that he was never home.

This is a second marriage for the Holms. Each of them has two children from previous marriages in addition to two together, a total of four girls and two boys ranging in age from 8 to 23. Three of the children still live at home, with a cocker spaniel named Cookie. There are always lots of people around.

To maintain order, the master suite is at one end of the C shape, and the children’s three bedrooms and shared bathroom are at the other end, with the living and dining rooms and the kitchen clustered in the middle. “It’s extremely open, but it doesn’t feel that way, because it’s curved,” Jansen explains.

The curtain wall along the interior curve of the C is triple-glazed thermal glass. Aside from that, he used only two primary materials, wood and brick. Even the radiant-heated floor is brick, sealed to repel dirt so that housekeeping is not a problem. With these traditional materials, he says, “The house could have been built 100 years ago.”

When it came to the furnishings, Janni Holm took over. A doctor by profession, she says she has been interested in design for as long as she can remember. She collects Danish 1950’s and 1960’s furniture, and it blends right in with the interior architecture, curves and all. “Apart from the fact that we had to sell our angled sofa, there were no major challenges,” she says.

What Finn Holm likes best about his new home is its connection to the outdoors year-round. The floor-to-ceiling glass gives virtually every room a view of the circular courtyard, which is paved in cobblestones smoothed by glaciers. An outdoor fireplace is handy for hosting small barbecues, perhaps for the neighbors. Janni Holm admits with a smile that, while most of them like the house, they can’t imagine living in it.