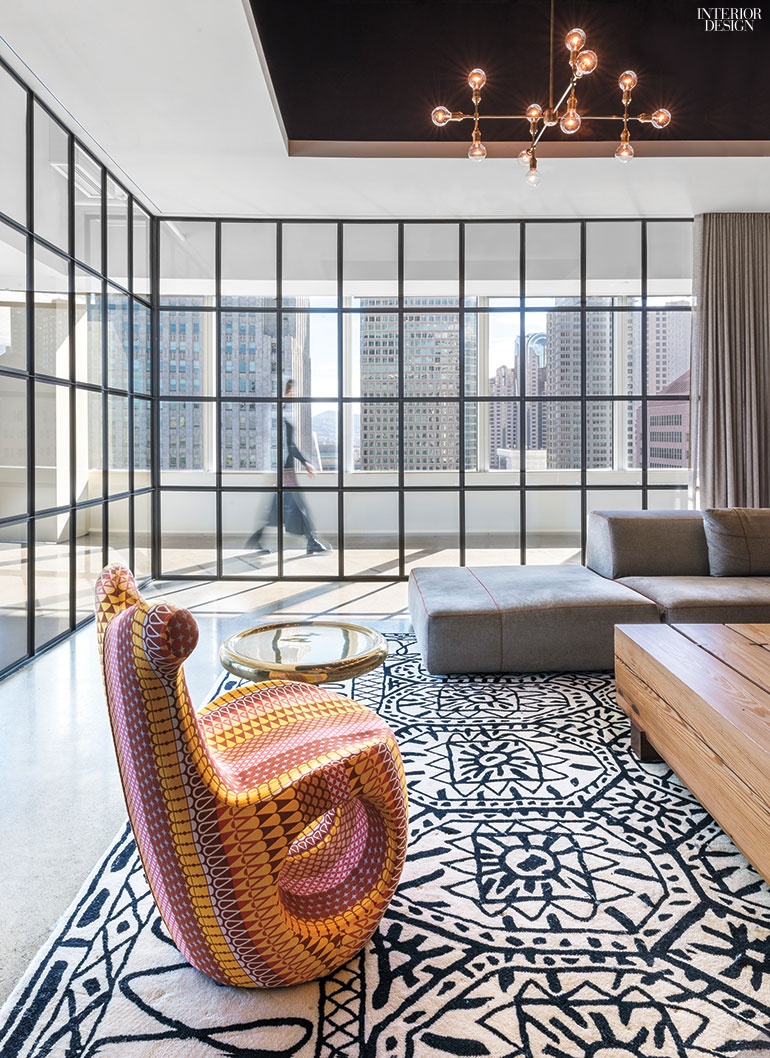 A warehouse was what they wanted. What they got was a class-A tower. Regardless, they turned to their favorite design firm, Gensler.

Shall we say the 15,000-square-foot project came front-loaded with dualities? There had to be a warehouse feel despite the lack of an actual warehouse, plus a celebration of Nokia’s Finnish roots while cementing its San Francisco ties. Embracing the challenges, Burry and Chung added another. In Chung’s words: “To give them a non-corporate, almost homey workplace.”

Ergo the “living room,” a lounge for meetings. To overcome its low ceiling, Burry and Chung punched out a rectangle. “Height is important in a pancake building,” he notes. They painted the recess black, then hung a chandelier by design darling Apparatus from the center. Other furnishings include a funky chair shaped somewhat like a snail and upholstered in a blush- and-ochre pattern with a macrame vibe.

Enclosing the lounge, a blackened-steel grid frames the glass walls. “We brought the ‘warehouse’ to the 15th floor,” Burry says. Polished concrete flooring adds to the industrial look. For Scandinavian flavor, “lots of wood” was a major request.

The Douglas fir trellis camouflaging the ceiling in the reception area is a knockout. Its crisscrossing steam-bent strips stretch over the reception desk and descend opposite, behind a shelf displaying Nokia Technologies product. (Watches, tablets, cameras.) Reclaimed oak or elm figures into the picture, too, for paneling and for furniture including a mammoth conference table with a live-edge top.

Don’t miss the phone rooms. Each holds a surprise. One has wall covering that mimics tie-dye from the city’s Summer of Love.