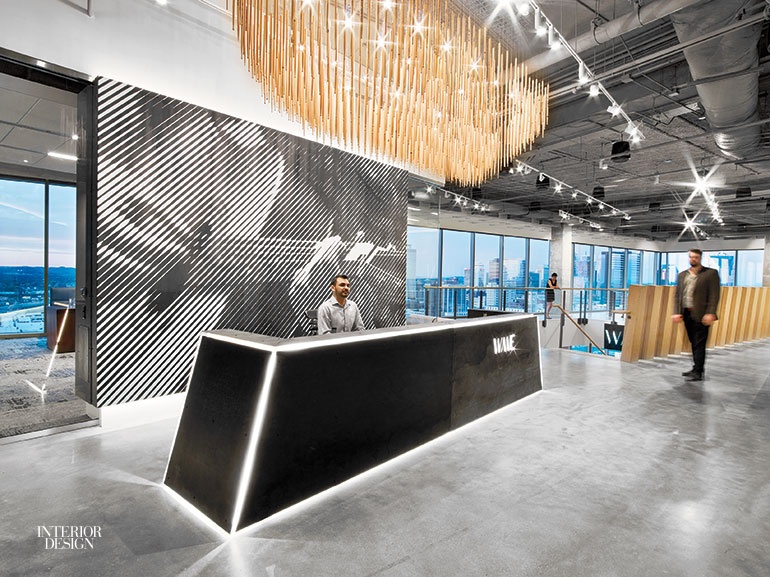 Forget about watching Entourage. Forget every stereotype pertaining to talent agencies. Those clichés are precisely what Hastings Architecture Associates managed to put aside for the Nashville office of WME.

It helped that Hastings had also designed the ground-up building, just off the city’s Music Row, and WME signed on early as the anchor tenant. The timing enabled Hastings to combine the separate spaces that the agency had leased on the top two levels, 14 and 15. That yielded a single 40,000-square-foot office. “We started by thinking anything is possible,” Greg Oswald says. (He is a partner at WME and co-head of its Nashville office, where the client roster of course includes superstar Garth Brooks.)

Hastings, for its part, started by “unboxing constraints,” as principal Heather O. Mathias explains. That meant exploring “a culture of duality,” as in the old honky-tonk Nashville versus today’s gleaming towers. Or, more literally pertaining to the project, enclosed offices versus open workstations. Then there was the WME brand to consider: how to follow a through-line that runs from Los Angeles to New York, London, and Sydney, Australia, while also acknowledging the unique Nashville context.

We’re all familiar with linear layouts, analogous to a single-loaded corridor. That was the agency’s previous environment, and certain aspects remain. Agents still have private offices, with the assistants seated outside, while Oswald and co-head Rob Beckham occupy the coveted corner domains, outfitted with furniture in a mid-century mode. However, Mathias tweaked the scenario, calling in elements of the collaborative workplace typical of the creative class. In the interests of Oswald’s “3 C’s”—collaboration, communication, and culture—she created nine neighborhoods.

The neighborhoods share seven conference rooms. Everyone, clients included, has access to the four open lounges, which are furnished like comfy living rooms. Each has its own vibe inspired by a famous Nashville music spot, for example Exit/In and Station Inn, and identified by replica signage. And that amphitheater seating connecting the two office levels? It’s often used for actual performances. This is Music City, after all. Wired for full production capabilities, the amphitheater can transform into a venue for a gig. In fact, client Jake Owen played there.

Associations with music kick off in the elevator lobby where visitors arrive. The pendant fixtures are shaped like giant stage lights, 10 feet in diameter, and a niche with a bench is for perching on to take selfies with the Polaroid camera provided, then hanging them from a wire along the wall with the help of clothespins. Drumsticks, meanwhile, play a role in the reception area, where hundreds of them—autographed by performers, agency staffers, and the designers—are suspended above the desk. Oswald calls the treatment “as cool as could be without being slick.”

Backdropping the desk, a black-and-white image depicts an acoustic guitar being played. An original photograph was blown up and printed on vinyl that was then cut into pieces to be individually installed on a blackened-steel plate. “The whole reception experience is about sound and light,” Mathias notes. As for the “light” component, the WME logo, other text, and videos are projected on the polished concrete floor.

The place that’s really about sound in the listening room, sponsored by the guitar-maker Gibson and stocked with high-end instruments, both acoustic and electric. “It’s an audiophile’s room with an aggressive sound system,” she says. Since all that rockin’ out, in the service of signing new talent, can build up an appetite, the café and pantry are just steps away. “There’s an intensive food-service program for staff and entertaining,” she adds. In this sense, the project is a hospitality crossover.

Miscellaneous ceramic plates and bowls, nearly 200 of them sourced from antiques shops and the Internet, are attached to the wall in the café and pantry. The idea behind the cheeky wall treatment was “china and Cheerios,” she explains—again that duality theme. “The agents here are super-sophisticated. But what they like to eat is bowls of cereal.”

Healthier options are offered, naturally. In case everyone is indeed eating too many Cheerios, however, the gym across from the café offers cross-circuit training, Pilates, yoga, and barre classes throughout the day. During concerts, the gym doubles as a private entrance for the musicians.