Saguez & Partners’ Office Is a Brazilian-Inspired Oasis Outside Paris 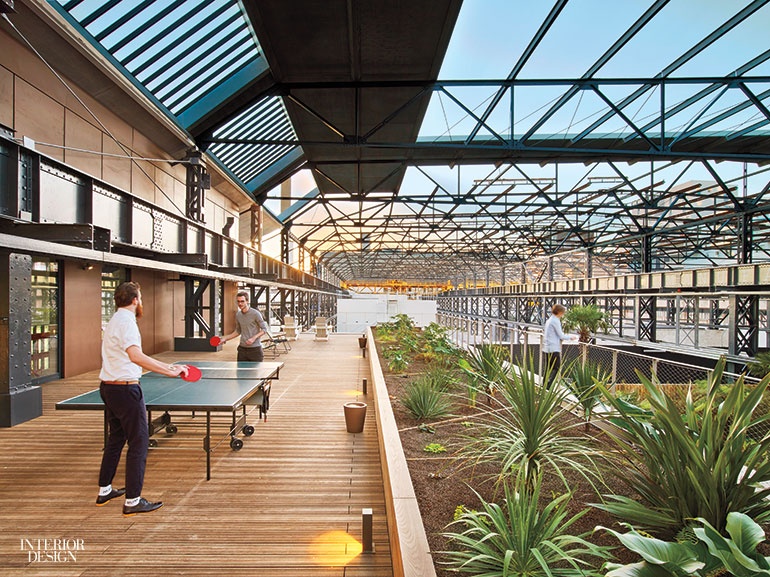 Moving to a new office near Paris has transformed how Saguez & Partners works. A flea market, the Marché aux Puces de Saint-Ouen, is what brought world fame to this municipality tucked between the northern boundary of Paris and a loop of the Seine. These days, the area is also gaining attention as part of Grand Paris, an ambitious urban renewal project to bridge the 19th-century core of the city with its suburbs. Olivier Saguez, whose architecture firm has been based in Saint-Ouen since 2003, has observed the changes firsthand. Saguez & Partners has now moved into a mixed-use eco-development called the Docks de Saint-Ouen, more specifically a 1922 landmark where Alstom used to manufacture locomotives. Saguez’s 46,000-square-foot space occupies one end, about a quarter of the long, low structure.

But the Manufacture Design, as Sauguez has named his firm’s new premises, isn’t your cliché industrial conversion. While respecting the character of the original factory, with its imposing steel skeleton, he added an abundance of wood and greenery as a counterpoint. Nature, he says, is a bigger influence on him than architecture. (This is someone who never spends a weekend in the city, instead escaping to houses at the beach or in the mountains.) At the heart of the office is a generous central courtyard inspired by the nature-led indoor-outdoor design of Brazil, where he often works. Palm trees and exotic plants flourish around a standard camping tent that, whimsically, houses a conference table. It’s an improbable oasis on the outskirts of Paris.

Emphasizing sustainability, building materials such as heat-treated ash for decking and cross-laminated timber for walls are clearly visible. Meanwhile, the symbolic nods to nature include the palm-frond pattern on restroom wallpaper. But many of the eco moves are invisible.

A vacuum waste-disposal system powers the heating via incineration. There is bike storage for everybody, dedicated parking spaces for only two cars. “It interested me, even at my age, to think about what it would be like to live in the future when we don’t take the car to work, when we don’t throw things away,” Saguez says over an espresso. “I tried to imagine what the city will be like in 20 or 30 years, when perhaps I’m no longer there.”

Moving his firm to a new location, he explains, was a chance to demonstrate his philosophy of collaborative work. He traded his own private office for a communal desk in the middle of an open plan. “It was a good way to show that I am no longer at the center of everything but with everyone,” he adds. “Architecture is a team sport. Only artists work alone. I try to no longer say ‘I,' rather ‘we.’” In the early days after the move, however, he learned from talking to employees that, in his efforts to create a streamlined shared space, he hadn’t left enough room for personal storage. Lockers were added for hanging coats and securely storing handbags. “You have to have the courage to change things quickly if they’re not working,” he says. “Even if you design for a living, you can’t anticipate everything.” He also realized that people didn’t know how to use the mini meeting rooms interspersed amid the workstations with the intention of encouraging spontaneous, efficient gatherings, giving people a chance to get up from their desks. So he labeled the enclosures 5 Minutes, 10 Minutes, and 15 Minutes.

He points out that the office has only one rule: No sad desk lunches. Its corollary is: No working in the cafeteria. The latter has a bistro area featuring table service, with the menu prepared by the building’s live-in caretakers. For the brown-baggers on the other side of the room, he designed what look like upscale picnic tables with matching benches. “I want my employees to take a real break, to have an escape, to feel like they’re elsewhere,” he says. “Normally, a cafeteria is in the basement. It’s the ugliest room. Here, it’s the best place in the building. There’s plenty of space and southern light.” A wall hanging behind the picnic-style tables pays homage to Brazilian landscape architect Roberto Burle Marx. To one side, a chill zone offers a bioethanol fireplace, books, and armchairs with a sophisticated living-room feel.

“I’m in a period of my life that’s about transmission to the next generation,” Saguez says. And that extends beyond his own employees. On the ground level, his firm’s neighbor is a school, the emphatically named Design Act! It offers a five-month postgraduate certificate program that emphasizes the importance of practical, hands-on experience by arranging apprenticeships on nearby projects.