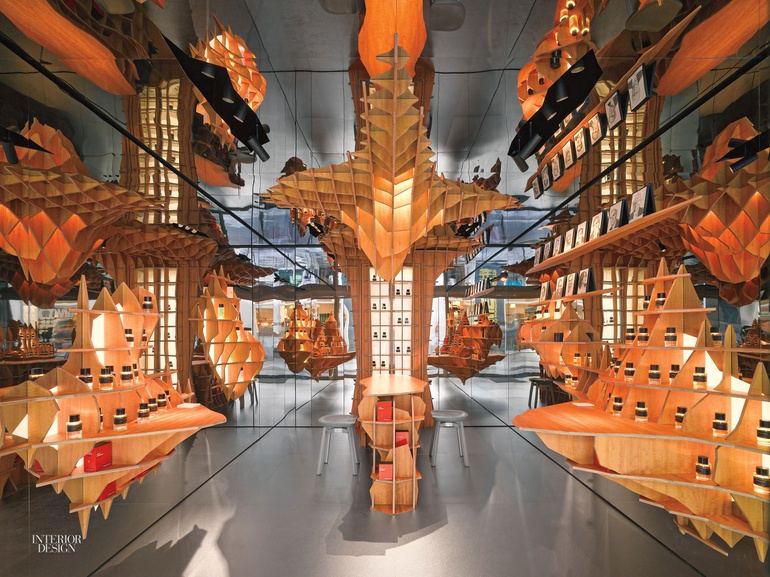 The storefront seems to be a single sheet of glass, the door nearly invisible. Inside, reflective surfaces wreak havoc with the sense of vision—illusion multiplied to infinity. This might be a fragment of a faraway galaxy, where strange wooden starships float in a silver sea. In fact, it’s Jakob + MacFarlane having fun with mind-bending augmented reality at a boutique for Éditions de Parfums Frédéric Malle. “For us, this is truly a transitional project, moving toward that territory between the real and the virtual,” Brendan MacFarlane says.

While the Paris location is prime, the main shopping street through the ever-more-upscale Marais district, the drawback was square footage, a minuscule 270 for the sales floor, plus 100 in back. So the primary need was to make tiny look larger. Hence the big window and the stainless steel everywhere else: mirror-polished for the walls and ceiling, bead-blasted for the floor. Myriad reflections, Dominique Jakob notes, create “space that isn’t there.”

They’re also crucial to the appearance of the display fixtures, variations of shelving that Frédéric Malle had admired at an art bookstore by Jakob + MacFarlane. At the perfume boutique, the plywood “beehive” grids are carved into asymmetrical curves that are of course repeated, in reverse, by reflections. As MacFarlane puts it, “The shelves are in real space, and they complete themselves in virtual space.” A delighted Malle calls them “mysterious islands.” Since they’re wall-mounted, they seem to float, and their satinwood veneer contributes a rich amber yellow.

Because he doesn’t believe that a fragrance can be properly appreciated in a boutique awash in different perfumes, he developed “smelling columns.” Here, they’re installed at the back. Customers interested in experiencing, say, Dries Van Noten’s signature fragrance walk up to a small opening in the cylinder, then breathe the sandalwood-based scent inside. The latest fashion designer to collaborate with Malle is Alber Elbaz. A few weeks ago, he launched Superstitious.