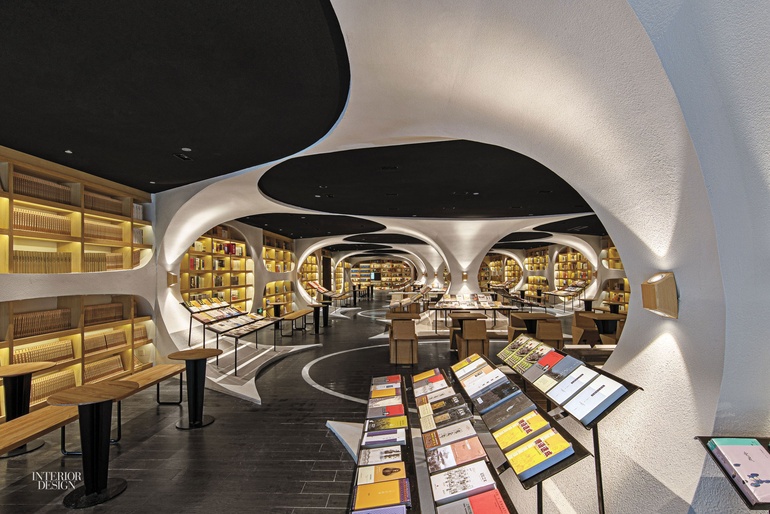 Once one of China’s most prosperous cities, Yangzhou has a long history of wealth both material and cultural. The artists, poets, and scholars who have called Yangzhou home have found their inspiration in the ancient gardens, temples, and public pavilions, set against a picturesque landscape of lakes and canals alongside the Yangtze River as it flows down to Shanghai. Now the postcard-perfect locale has also inspired a bookstore, Zhongshuge, by X + Living Architectural Design (Shanghai) Co.

Known for combining arresting displays with plenty of room to peruse, Zhongshuge, named for the owner’s daughter, is a hugely successful chain. That’s thanks, in general, to the enduring popularity of print in a country that is also whole-heartedly embracing the Internet and, more specifically, to interiors that are more library than commercial space. X + Living had already completed five of Zhongshuge’s stores when the firm was entrusted to design the Yangzhou location. X + Living design director Li Xiang says she was allowed a free hand in developing the shop’s concept, due to the trust that the owner placed in her talent: “He didn’t have too many demands, as he respects my philosophy.”

Number six is in the low-rise riverside Zhenyuan shopping and dining district. “The complex is a landmark, with architecture that conforms to the historic buildings in the surrounding areas,” Li says. “Zhongshuge’s design takes these environments into account. Our solution was to extract Yangzhou’s cultural symbols as well as elements from the complex, then convey them as much as possible  through contemporary means.” The result is a microcosm of Yangzhou.

Take the long central corridor,  which starts at the entry and terminates at an information desk. The corridor’s walls curve like a tunnel’s or like an exaggerated moon gate such as those found in the city’s private gardens. Lining the arced walls, shelves are fronted by clear acrylic panels to keep the books in place as they rise. The shelves don’t quite meet at the apex of the ceiling, instead leaving a jagged swath of black visible.

Visually elongating the corridor still farther, that startling image is mirrored, on the tempered-glass floor, by a path of white meandering through the dominant black. The path is laser-cut with phrases in Chinese and English and lit from below. “Using both languages represents the fusion of Eastern and Western design,” she notes. Regularly spaced along the corridor, free-standing oval display tables sprout lamps with drum shades for a touch of cozy domesticity.

To one side of the corridor, occupying approximately half of the total 10,000 square feet, is the main reading room. Its design, while quieter, echoes that of the corridor in the emphasis on curves. Here, however, they touch down in the center of the space, where she concealed a row of structural columns by building them out with white-painted arches. Their spans reach the sidewalls, lending a somewhat futuristic geometry to the large volume. While the arches are white, the ceiling is again black, and the floorboards are stained dark walnut.

On the flared bases of the arches, she installed metal display stands with shelves tilted at different angles. Inserted between the arches are bookshelves and a variety of reading areas. The latter are furnished with standing-height round tables, two-person tables   with angular chairs, long tables for sharing, and benches.

Moving from neutrals into bright colors, the children’s section features blue, green, yellow, and pink bookcases shaped to look like the outlines of houses along a fanciful, stylized version of a Yangzhou streetscape—one that can furthermore be moved or reassembled. “The children’s area also adopts Yangzhou’s bridge culture, though the size of the arches is scaled for children,” she says. Soft materials and rounded corners abound, making this a safe place to play.

Phrases in multiple languages appear on the window, with fairies and a smiling full moon figuring prominently in English examples. Across the ceiling and walls, she scattered tiny twinkling fiber-optic lights for the illusion of an enchanted night sky. The flooring is PVC embellished with a world map, just one more way to educate through entertainment.