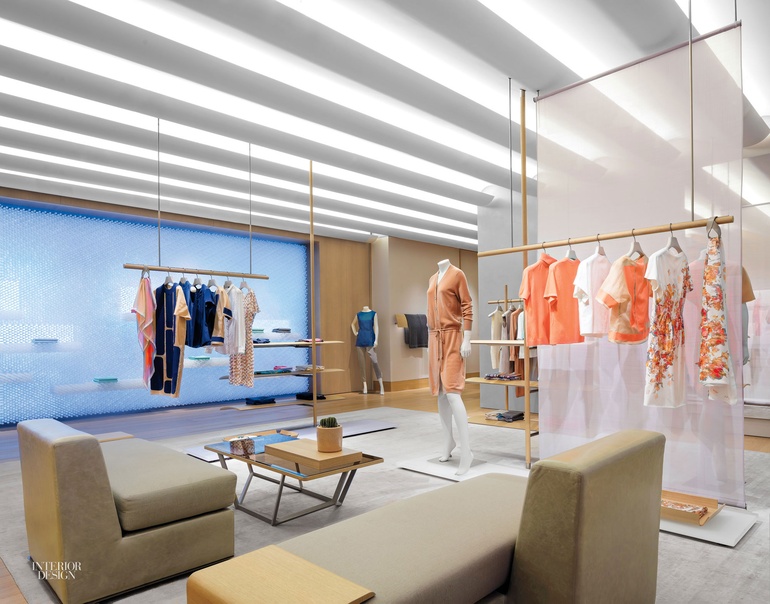 We first met Michael Gabellini when he was interpreting the Jil Sander brand at boutiques around the globe. The Interior Design Hall of Fame member and later his partner, Kimberly Sheppard, filled their portfolio with fashion retail projects for the likes of Salvatore Ferragamo, Vera Wang, and David Yurman. As Gabellini Sheppard Associates continued to expand exponentially, it made its mark on virtually every other sector as well. On a small scale, a gallery and exhibitions tied Gabellini and Sheppard to their beloved art world. Hotels and restaurants loomed large. Global commissions satisfied wanderlust. Back home in New York, Rockefeller Center’s Top of the Rock observation deck and Rainbow Room dining venue have left an indelible mark on the skyline.

Returning to the fashion realm, Gabellini Sheppard has completed a 1436 flagship, which just happens to be the firm’s first project in Beijing. Comprising women’s and men’s sportswear as well as collections for children and infants, 1436 sells superfine cashmere made with wool from baby goats raised on the grasslands of Inner Mongolia. Gabellini embarks on the compelling backstory: “The brand is the jewel in the crown of the Erdos Cashmere Group, the largest manufacturer of cashmere in the world.” From grazing to garment production, everything is sustainable, and all aspects of Mongolian village life come under company oversight, as Gabellini and Sheppard observed firsthand on several trips to the remote locale during the project’s three-year duration. The action then moves to Beijing, where creative director Graeme Black, a Scotsman and an alum of Ferragamo and Giorgio Armani, heads up design operations.

In addition to strength and durability, 1436 cashmere is celebrated for its gossamer quality. This lightness is what Gabellini and Sheppard sought to breathe into the two-story granite building’s 4,300-square-foot interior. With minimal materials but myriad details throughout, the architects captured the company’s desire for “an ethereal environment, as if suspended between the earth and the sky,” Gabellini recalls. If the white-oak flooring and paneling represent the earth, the suspended ceilings’ meringue-white folds of cast gypsum are the sky. Downstairs, the folds are restrained. Upstairs, they appear to billow like clouds. Folds come into play again in the switchback staircase. “It’s a bit like origami or the cut and drape of clothing,” Gabellini notes. The stair’s handrail folds over to house LEDs.

Midway up the staircase, the landing extends to form a display platform hovering over the ground level—less of a sales floor and more of a “runway” to showcase select examples from the latest collections. On both levels, display fixtures tread lightly. “We used floor-to-ceiling poles with crossbars at differing heights,” he explains. “Some read as trapeze bars, others as ballet barres.” All are graceful.

Ethereality reaches new heights with another display system. It’s a 24-foot-wide expanse of wall comprising 16,000 translucent acrylic rods. Aside from the symbolism of representing the spindles used to spin yarn, the rods serve a functional role. Pull a group of them out, and they can form shelves for displaying folded sweaters. The shelves can furthermore change color, thanks to LEDs installed behind. Another wall is worth  mentioning, too. Deriving its luminescence from a much lower-tech source, the painstaking art of Venetian plaster, this mural features horizontal bands gradating from charcoal gray at the bottom to white at the top—an ideal backdrop for, say, a citrus-colored wrap. On still other walls, fitted flush into niches, are polyester-wrapped panels that are easily swapped out, affording seasonal flexibility for merchandising. Gabellini notes that these niches are equally hospitable to swaths of silk, photographs, or works of calligraphy.

Where the sidewalls give way to windows, the treatment links back to Mongolia. “I was particularly inspired by the natural light of the region,” Sheppard reminisces. So she devised shades of narrow plastic strips to filter the city’s daylight. The front window, meanwhile, makes the branding statement. The number 1436 is applied in graphic film on the glass, in a refined script befitting the store’s location in the luxe Beijing Kerry Centre. Behind the glass, glowing video content appears on rows of LED panels. Think of a kinetic billboard, and you get the picture. But the picture here, as created by the 1436 team, is abstract or conceptual, images conveying ideas of nature, movement, or pure light. Nothing commercial, nothing as obvious as a runway show. The loop is always on, broadcasting its subliminal branding. Such is the new face of commerce.