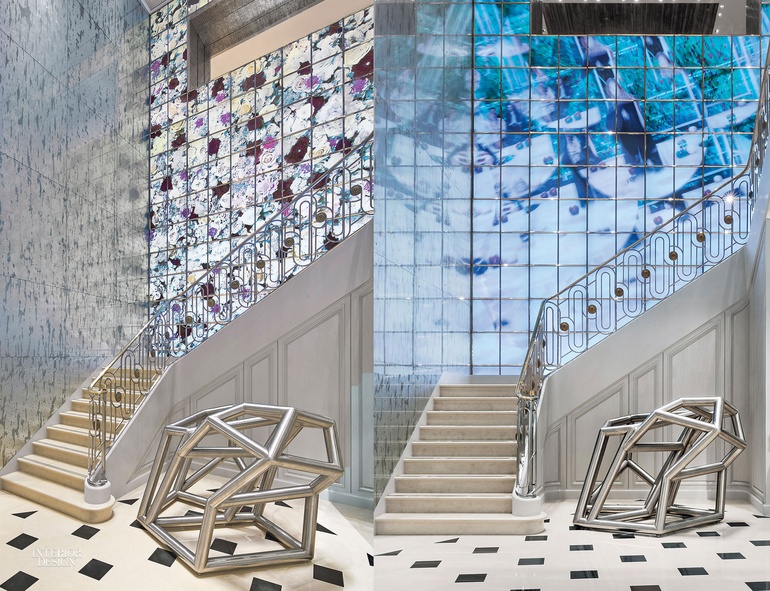 Both the flagship maison in Paris and a recent mega-boutique in Seoul, South Korea, informed Peter Marino Architect’s design for a Christian Dior outpost in Beijing’s China World shopping mall—keeping company with Céline, Prada, and Louis Vuitton. The interior “emphasizes Frenchness,” Peter Marino begins. Given concerns about counterfeits in the Chinese market, that’s a visual way of conveying the message that these Dior goods are the real deal.

French references fill the two-level, 9,800-square-foot store. “There’s plenty of Louis XVI–style paneling,” Marino continues. Further delighting Francophiles, the staircase is inspired by the original one in Paris. Limestone flooring with black marble cabochons, quintessentially Gallic, was deployed in Seoul and reappears here with slight differences in patterning. Curtains of white paillettes, which started in Seoul as a specific reference to the facade of the building that houses the boutique, are déjà vu, too, as are shimmering expanses of silvered metals and verre églomisé. Individual video monitors surrounding Seoul’s spiral staircase have become an unbroken screen wall backing the stairs. Even without a gallery like the one in Seoul, Beijing afforded the opportunity to assemble another collection of art and design. The place of honor, at the foot of the stair, goes to a sculpture by Turner Prize winner Richard Deacon.